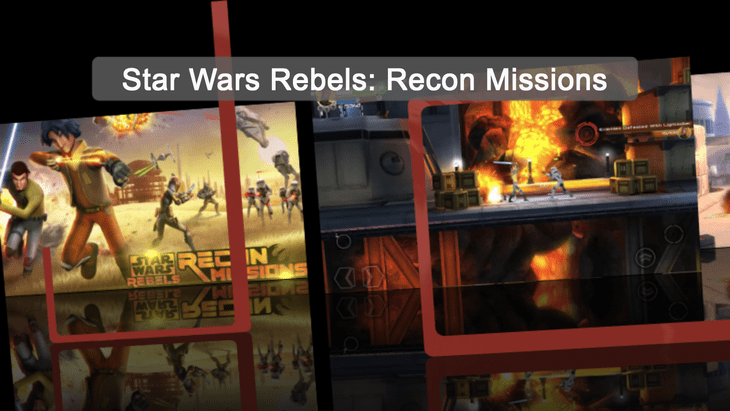 Star Wars Rebels: Recon Missions is a recent entrant to the mobile and desktop platforms and it could very well be your next favorite Star Wars game until the next big thing comes out, and we might expect Lucasfilm to launch a movie tie-in game before it releases the Force Awakens later this year. Until then, you can enjoy a kid and teenage-friendly version, which is nonetheless a very fun action platformer with top-notch graphics, great gameplay and accessible difficulty. 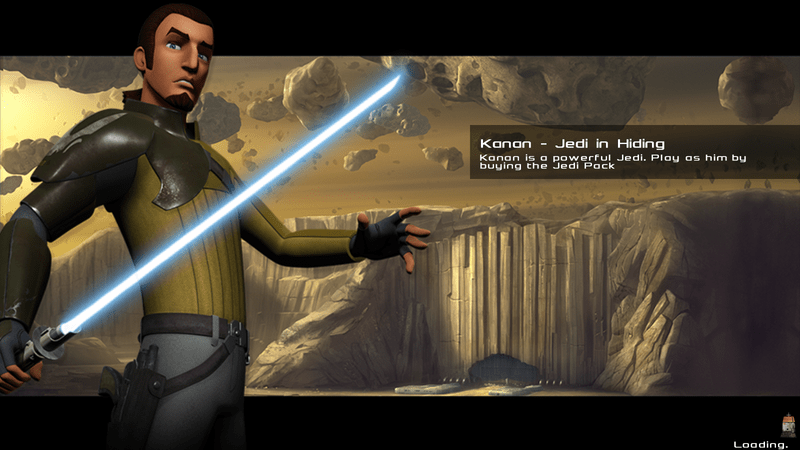 First things first, we need to talk about the money because the majority of the negative reviews on the play store for this game complain the game is not free.

Consider Star Wars Rebels Recon a premium game, which it is. Google Play needs to add a few more categories to clear out the misunderstanding – the term “free” in this case means a free demo, where you can play the initial 4 missions. The rest of the game is available via in-app purchases and you have options.

The rest of the 30 levels are available for $4.99 in the Founder’s Pack, and they also unlock two more characters, the Jedi Knight and the painter-prankster girl. If you are not ready to cash out $5, you may consider the other two options that come at a double as cheap a price and are a Jedi pack with 15 levels, and a Sabina the explosive pack with 15 levels respectively. The game also holds 50 additional challenges and a boss fight behind the paywall.

Overall, expect to cash out about $8 if you want to enjoy all of the game’s content.

At the same time, the 4 demo levels provide for about an hour of great gameplay, so there is no reason why you should avoid installing the game even if you strictly oppose to paid or freemium games.

Finally, to clear out the price issue and justify Disney’s approach, although I am no advocate for AAA developers, comes the performance issue. I have tried the game on several devices – Samsung Galaxy Tab 3, Huawei MediaPad, Windows 8.1 tablet and a Win 8.1 desktop, and a free demo comes very handy when you are trying to figure out which of your devices offers better performance. For some inexplicable reason, if I had Samsung device alone, I would not have been able to try the game at all since the performance was so buggy I initially wanted to give it a poor rating while a cheaper Huawei did much better.

The Win-powered tablets require a keyboard to play, so be aware of that before you install.

Among the Android-related technical issues are the parts of the UI not loading, or buggy performance, and it depends on your device, so having the free demo as your trying ground before you decide to cash out your bucks for the premium game is a welcome option.

Another inconvenience is if you uninstall the game and install it again with the same account, your purchases can be restored, but your progress can’t. 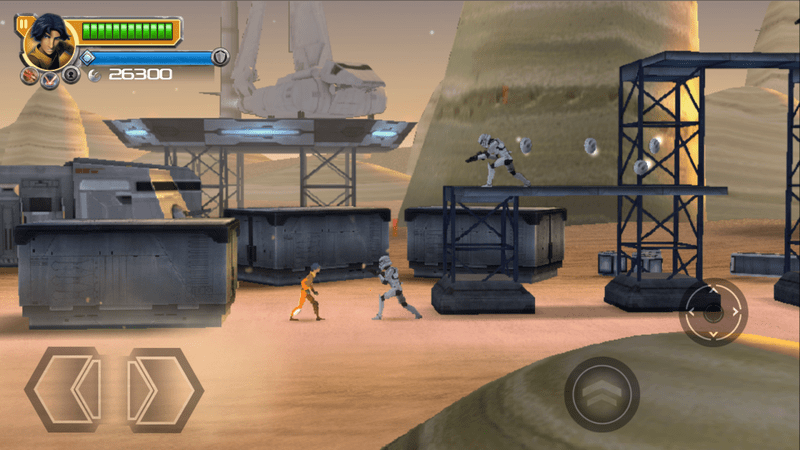 Star Wars Rebels is a Disney XD show with a slew of browser games to go with it. I know it because I have nephews who love it, and being an avid Star Wars fan I would sometimes steal a sneak peek at the show myself. Although, it is still a kid show. That being said, the game is a stellar tie-in for the show while the adult Star Wars fans may be totally unaware of who Ezra and the crew are.

Here is a little heads up on the story. The times are dark, right after the Jedi Knights have been betrayed and murdered. You won’t see any familiar characters in the game because the show introduces a new plot line about a stray Jedi Knight hiding in the depths of the universe. His name is Kanan Jarrus, and he has a crew of space smugglers who are also in the resistance.

During one of their smuggling missions they meet a young rebellious Ezra, an orphan who survives by stealing, living on a planet Lothal, quite a dull and dusty place. One accident leads to another and the crew have to accept Ezra as their new team mate, but the ultimate reason for this unlikely choice is Ezra has the power to become a Jedi apprentice.

Whether or not you have watched the show may affect how much you will appreciate the game’s characters, since there are no familiar, much loved ones like Han Solo, Chewbacca or Luke Skywalker. On the flip side, everything about the game is perfectly in line with the SW universe created by George Lucas – the architecture of the buildings, the ships, the Imperial soldiers, the robots, and the overall story. 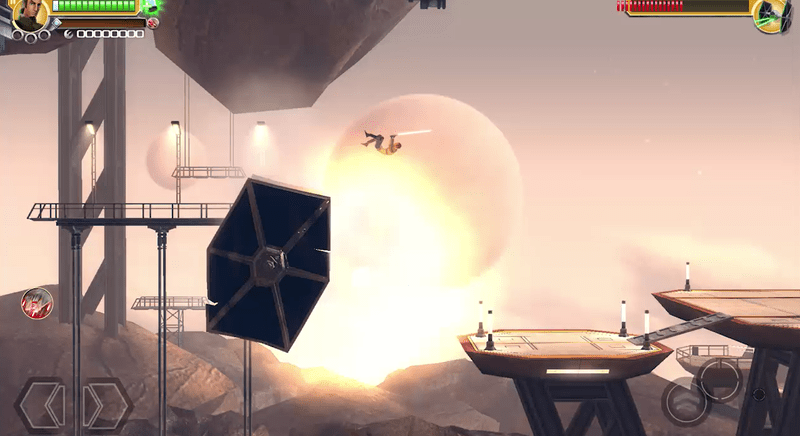 SW Rebels Recon Missions is an action platformer at heart, generously spiced with building and grinding missions that sometimes interfere with the awesome action. In fact, if you remember the other Star Wars games, you will be pleasantly surprised Rebels is neither a card battler, nor a turn-based strategy.

You play as Ezra, until you pay for the full game and then you can play as the Jedi Knight. The missions consist of rescuing various citizens in trouble, battling the Imperial soldiers, drones, driving an Imperial AT-MP Walker, which is awesome, and scouting endless areas filled with dangers and loot.

The action is very fast-paced, so there is not time to get bored. Your aim is to kill the imperial soldiers, robots, heavy gunners and drones that may come from either side; then get to the citizen and rescue him or her.

All around the setting, there would be golden and silver coins you would need to collect. You don’t necessarily need to collect them all, but the more you get the better. The coins here are called Hope, and you will need a lot of Hope to share it with the rescued citizens. When you do so, new perks and power-ups get unlocked for you, so you can use them in your next mission. 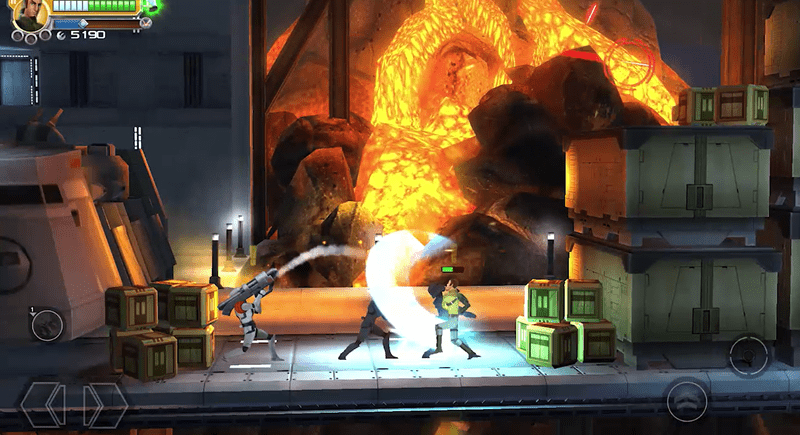 As smooth as they are, the controls in Rebels take some getting used to mainly because you will want to jump and shoot at the same time, and that requires some finger work. The virtual joystick has several straightforward functions – left and right arrows are to move; the up arrow is to jump, and if you double-tap it you will jump twice as high; the attack button is to start shooting.

You need to drag the shoot button the direction of your target to aim. Hence, you need to perform several taps simultaneously to be able to move in a specific direction, jump or double jump and shoot at the same time. Nonetheless, it is possible to master. 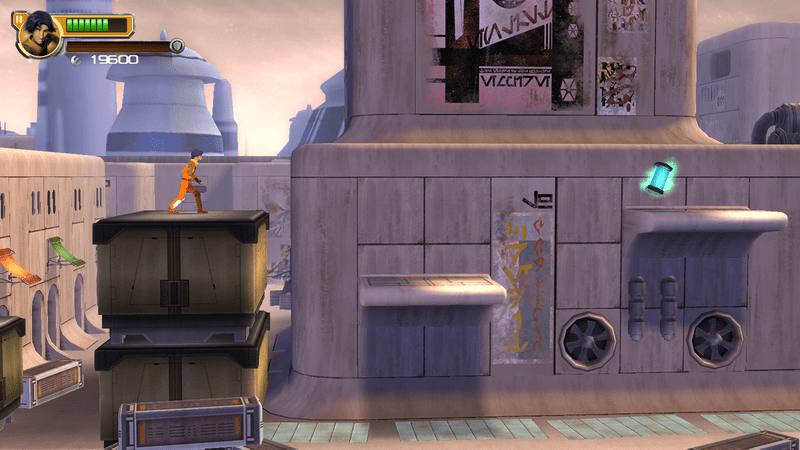 That said, you may find that moving too fast may get you in an uncomfortable position, where the imperial troopers are ahead and behind you, attacking from both sides. It is very inconvenient to aim from this position since you will need to change directions all the time to shoot both ways. It is always better to clear one area before you move to the next one.

Also keep in mind that the areas that have alarms will keep generating the troopers until you shoot and disable the alarms.

The Jedi lightsaber is also a worthwhile experience and very fun to operate, as much as the imperial AT-MP walker. 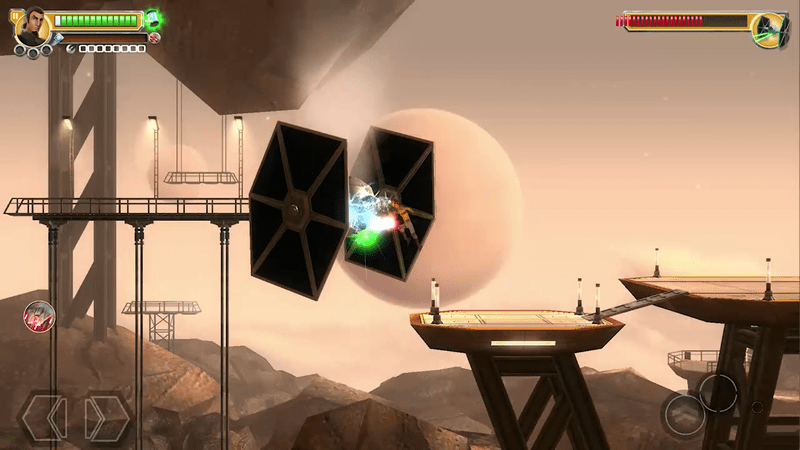 The other part of the gameplay is beefing up your base, or Haven, and truth be told, it is a little on the boring side. The base is where your ship is, and you get to build various structures around it, like the shield generator, food supplies hub, satellites, shelters, droid factories and a lot more. At some point you unlock a perk that allows you to paint funky wall graffiti on those structures, but I see little to no fun in it.

I also disliked how these UI elements are scattered across the base. Even though it is not a long run, you still have to find the green alien, Zeb Orrellios, tap the chat icon to access the building and customization menu. 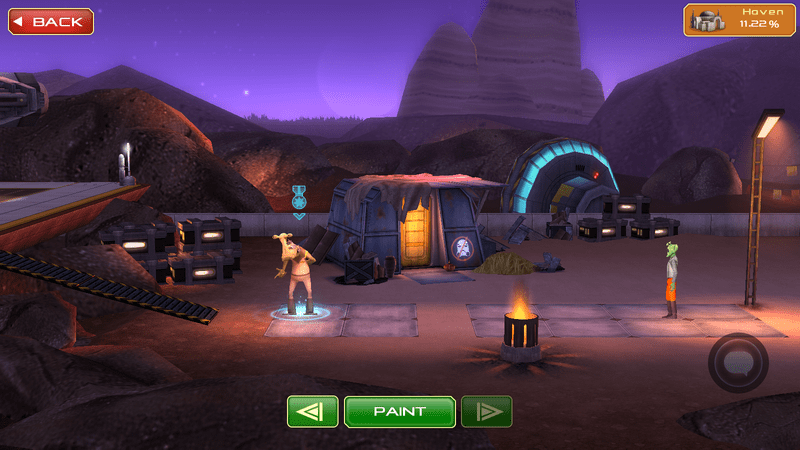 Then, if you want to go on a mission, you need to find Hera, the crew’s pilot, tap the chat icon to access the missions map. Next, if you wish to spin the wheel of fortune to see if you can get some perks, you need to find the Droid and tap the chat icon to interact with the wheel. Ironically, most of the times it would give me a one more spin ticket.

Overall, building and customizing is moderately fun, but more of a distraction and here is why. You save a citizen in each mission, and take them to your Haven. Then, you need to have enough shelters to accommodate them, but what’s worse you need to give them your money, or Hope. This wraps the second part of the gameplay into the heavy grinding blanket that is more of a nag than entertainment. 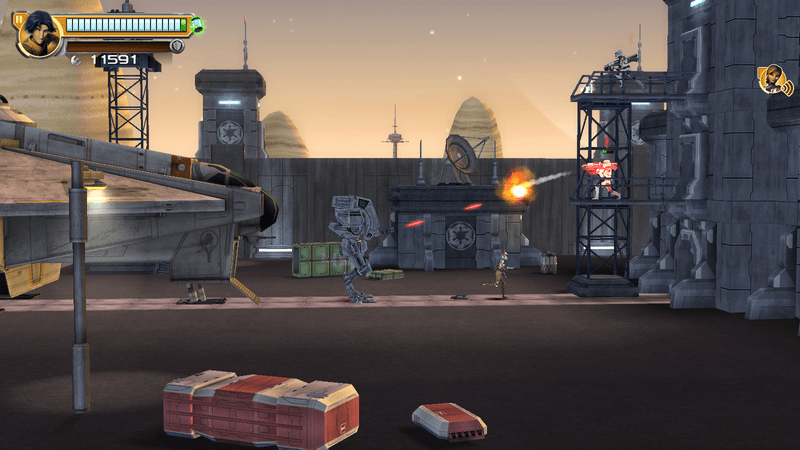 Rebels looks sharp and dazzles with its graphics. Everything about it, starting with the characters to buildings, explosions and the assembly of tech looks like anything you would expect in a Star Wars game, and it is a perfect homage to the franchise in this respect.

The soundtrack and the sound effects are also spot-on, but two missions into the game I found myself turning them off for the shooting and explosion noises and the epic orchestral soundtrack create a cacophony. Although, it totally depends on how you like your action games. 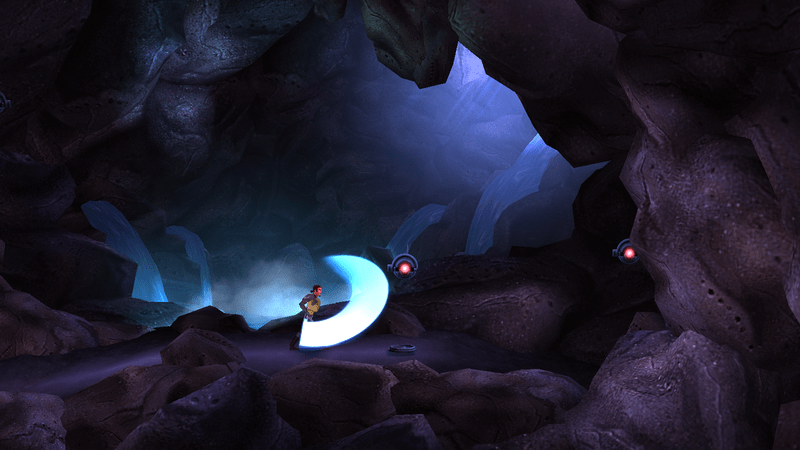 Star Wars Rebels Recon Missions is an addicting game, and once you get a taste of the four initial levels you will be more than tempted to buy the rest. In fact, if you choose to purchase you may find yourself playing up to the end within your first gameplay simply because you want more of that genuinely Star Wars experience. The missions have a good replay value and you can keep coming back to the easier ones to grind for some Hope because the citizens you save require ridiculous sums of it to be content. 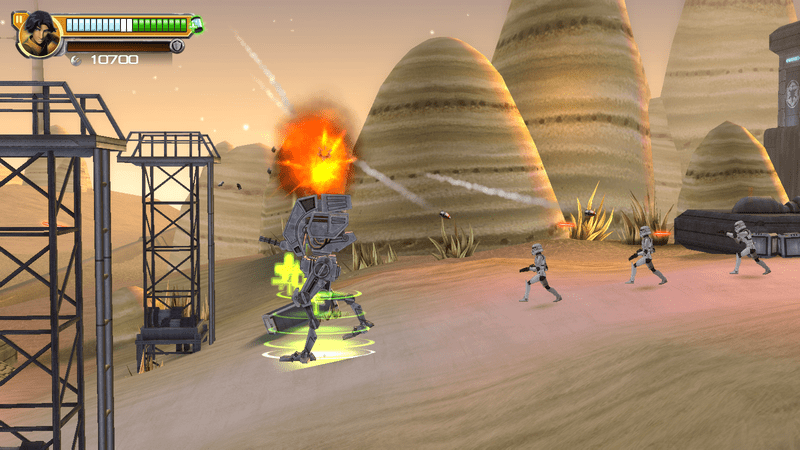 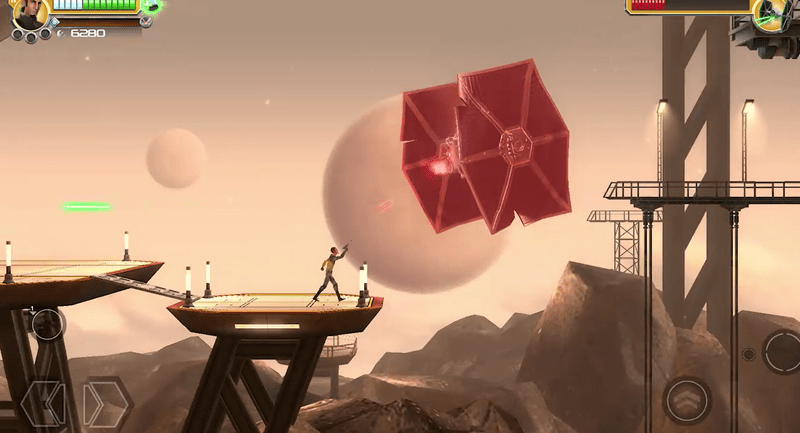 Star Wars Rebels Recon Missions is a superb show tie-in action-platformer perfect for the majority of the Star Wars universe fans and a great homage to the franchise. The game is well worth its full price and offers long hours of intense gameplay with everything you could dream of in a Star Wars game – light sabers, guns, robots, imperial soldiers, drones, crazy jumps and spectacular areas that explode in in a large variety of ways. The game offers a decent replay value, and you can replay missions to grind for the in-game currency and bonus items that will let you beef up your Haven. The only true downside is its performance on some select devices, mostly Android, but if the demo levels run smooth on yours, you have no reasons to worry.

Finally, Rebels is a premium game where IAPs unlock the full game and the free content is a mere demo. If it said so in the game’s title, there’d have been significantly less bad reviews on Google Play.