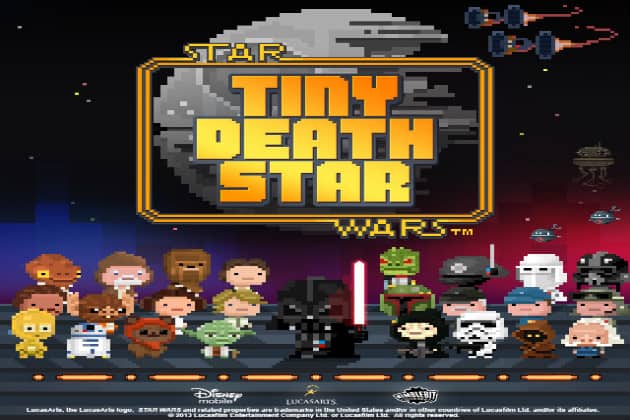 We now have the first use of the Star Wars license since it was bought out by Disney earlier this year. Star Wars Tiny Death Star is a mobile game that borrows from the hit free-to-play title Tiny Tower, but how strong exactly is this game in the force?

Seeing how Disney’s first order of business with the Star Wars license was to shut down the LucasArts, I was fairly surprised to see the LucasArts splash screen when booting up Tiny Death Star for the first time. Disney made it fairly clear by shutting down LucasArts and selling the console rights to Star Wars games to EA that their own focus with the Star Wars license would be aimed more at social media sites and mobile apps.

It’s caused plenty of controversy with the Star Wars gaming community as a game titled Star Wars 1313 was in the making before the original LucasArts team was put to a close. The game had a good amount of hype built up around it, with its outstanding graphics and non-lightsaber combat elements. EA will hopefully rekindle this relationship with its own Star Wars franchise Battlefront.  Only time will tell how things will work out for the Star Wars license on the consoles. 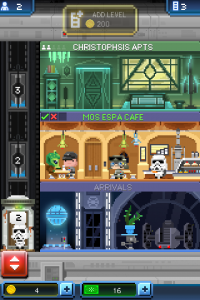 Now that we got that out of the way, let’s look at how the first mobile installment with the new Star Wars license adds up. As I mentioned in the header, Tiny Death star is really a Star Wars make-over of Tiny Tower. Both games are developed by Nimblebit, which has an excellent reputation of making gorgeous 8-bit style mobile games. Star Wars is really a license I’d like to see more games with the hardcore gamer in mind, but if we’re going to get more of a humorous and laid back environment, I couldn’t pick a better mobile developer.

The game is based on the premise that the Empire has run out of money and to resolve the issue the Emperor has tasked you to start earning some income for his evil empire. You have several different avenues of creating credit income from building retail, recreational, food, service, and imperial levels. Just building the levels won’t get you any type of income without bitizens to work them. In order to obtain workers for your levels you’ll have to build residential levels where bitizens can live.

You’ll also be given specific tasks from time to time, such as stealing rebel plans or building a certain type of level. During the beginning stages of the game you’ll find yourself preoccupied completing missions, but after a short time the missions and tasks take longer and longer to complete. This really brings me to my next point, which is time management. Everything you do in Tiny Death Star takes time to complete, whether it’s having your bitizens stock inventory, stealing rebel plans, or building a new level. You can manage to get around this using an in-game currency called imperial bux. You can earn imperial bux slowly (very slowly to be honest) by accomplishing certain tasks or building needed levels, but if you really want to progress through the game in a reasonable amount of time, you’ll find yourself either buying imperial bux at the store or downloading other games and free trials to earn free bux. The game does continue to work and earn income while the app runs in the background, so you’re really left with either accepting that it’s more of an “AFK” type of game or a spend cash to advance type of game.

Where the game really shines is its vast amount of collectable type content. You’ll find unlockable scenes that you can re-visit in your album, as well as spotting either rebel spies like Leigh Organa or welcomed visitors like Boba Fett. There’s no doubt that Tiny Death Star focuses on the original trilogy over the prequels and as a devoted Star Wars fan, that’s fine by me. Because the game has no real challenging modes and takes time to develop credits and build levels, they’ve added a few functions to help keep you entertained while you wait for your latest Holo-Chess Hall to finish building. The Holonet acts as a social media site for the bitizens that live in your Death Star. In there you’ll find status posting from your residents that make comments like “New roomie shares my appreciate for fine snacks.”

Unfortunately the majority of your time spent outside the first thirty minutes is giving elevator rides to new arrivals, reading the holonet, and occasionally restructuring the level layout.  I personally enjoy the game because I start it up while I wait for the elevator at work and restock all my levels, maybe build a new one if I have the credits and continue on with my normal day outside of the game. For others who are looking for an enjoyable game that will entertain for consistent amounts of time, you may be in for a quick disappointment.

Pros: Great midi sounding Star Wars tunes, fun to look at pixel art, a good amount of humorous moments, and great gameplay for the type of player who only wants to invest a few minutes at a time.

Cons: Purposely slow-paced to encourage purchasing of very expensive imperial bux, lacking in additional functions to occupy yourself while waiting for timers to finish, and no real substance to the gameplay.