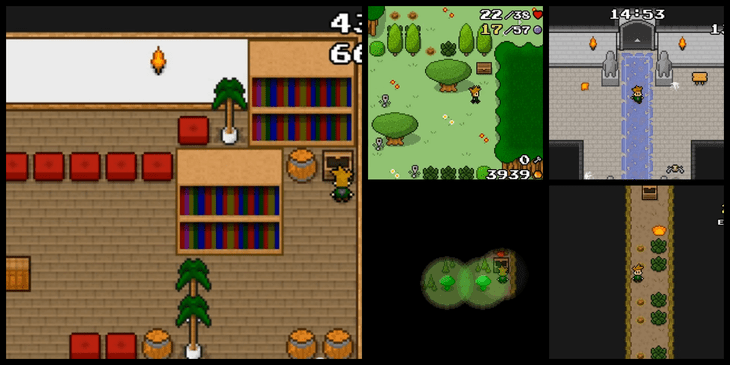 The first thing that comes to my mind when I see yet another 16-bit SNES imitator on Google Play is the leggings. You know, that controversial outfit women wore in the 80’s – most of them, may my older cousin Lucy forgive me for she wore pink, looked ridiculous, but a few lucky ones managed to look chic, like Madonna. Point is the games imitating that familiar Zelda style on a mobile must indeed encompass a lot of things but the 16-bit graphics. For one, they must be entertaining, and it is ten times as challenging to create an entertaining game these days than it was 20 years ago for the gamers are over-satiated. Stories of Bethem, in this respect, wears its leggings with pride and looks chic. Let us see why.

The game starts with a somewhat lengthy intro that narrates a story that took place several thousand years before the hero was born. There is nothing really new about it, and hundreds of games exploited the tried grounds, but Stories of Bethem takes on a fresh turn. At the beginning of times, Gods fought among themselves, and humans suffered. Then, Gods left and humans suffered even more because they went crazy without Gods.

Then, witches and heroes appeared, and humans started suffering even more because what is a witch if not a human, but with supernatural powers? They, the witches, cast their spells and curses as they pleased, without any philosophy whatsoever, so no wonder people got hurt.

Once, a Blue Witch got up in a bad mood and cast a spell on Khoma’s father, and the man fell asleep for ages. This is how the Blue Witch steals people’s energy, but she gets locked in her victim’s dreams until she kills him altogether. So, Khoma, the young wizard, sets out on a trip to find the Red Witch, the only one who can save his father.

Thankfully, instead of a Rapunzel in distress, our hero saves his father’s life.

The primary appeal of Stories of Bethem is the gameplay itself – massive and impressive open world, full of dungeons, beaches, fields and forests – the regular RPG locations. You scout the areas collecting various items you need for that super spell to save your Dad, but also to enhance your own set of spells because you need them.

First of all, you do not upgrade or level up your hero, but you become stronger as you collect more spells.

Second is the levels are very well thought-through, so never will you feel like you have been here and done that, or wonder where the dang you are.

Third, and this is somewhat odd is the bushes you destroy and the baddies you kill are respawnable, so whenever you clear the area, leave and then come back to it for some reason, you will find them all alive and well. Depending on how you like your dungeon crawlers, you will either like or hate this feature.

You walk around the areas, cast spells at obstacles on your way, like rocks and bushes, solve puzzles to get through some dungeons, or kill all sorts of 16-bit villains with your spells.

The controls, as much as everything else here, are smooth, responsive, and feel like second skin, so the moment you start playing you forget about the controls – the joystick to move to your left, and the spell casting button on the right. Or, you can choose swipe controls.

The game is free, not freemium, which means you don’t buy anything here, and this is a pleasant surprise. You have a limited number of lives, though, 15, but you have to try really hard to spend them all within a single gameplay session.

Each time you die, you view a short ad, and that does not often happen unless you want to jump in every black hole there is.

Moreover, the game does not require any permissions to run – another surprise these days.

I loved the fluid and beautiful 16-bit rendering, and even though it does not allow for a lot of details, it manages to captivate and complement the engrossing gameplay in all the right ways. For one, there is a very decent soundtrack, which is both fun, urging and catchy. So, a great atmosphere for this Zelda-like open-world platformer, RPG adventure is guaranteed.

If you like open-world that gives you little to no clues as the where you should go and only a few instructions on what you should find – Stories of Bethem will certainly please you. If not, give it a try – there is really nothing to lose, but my guess is it will hook you anyway.

No that it is overly difficult for any newcomer, but the game is definitely aimed at the fans of the genre who still find it relevant and fun to play. The locations are diverse; the puzzles are moderately challenging; the battles are fierce.

Sometimes, you will get stupefied as to where you can find this or that item, and will scout the same locations several times to no avail. It is not a glitch, but a genuine challenge, so if you feel you are losing the touch, you can watch some nifty walkthroughs on the developer’s YouTube page.

There are also secondary quests you can complete winning more spells and become stronger, for some levels will require more spells to beat – sometimes the number of villains is disheartening.

Many users note the somewhat buggy translation, which is true – the game was initially developed in Spanish, and translated into English with what seems like Google Translate. Nonetheless, it is not that big of a deal, and it also adds to the overall sense of humor found in dialogues, which I like, so the overall value is not hindered by the flaws of translation. On the contrary, I would not change a thing about it.

Stories of Bethem could have been a worn-out old tune; instead, it turned out to be a breath of fresh air. It is full of paradoxes. There is nothing new about it – familiar adventure/ RPG, good old story, tried out mechanics. Yet, these elements seem to be the tried-out components of a successful adventure game, and Stories of Bethem uses them with dignity, spicing the genuinely entertaining gameplay with great 16-bit design and an excellent soundtrack. It is highly polished, deep and meticulously crafted, which makes it even more surprising why it’s free. I recommend this little treat wholeheartedly to anyone fond of the genre, Zelda-like adventures, or just willing to explore the indie side of the market.