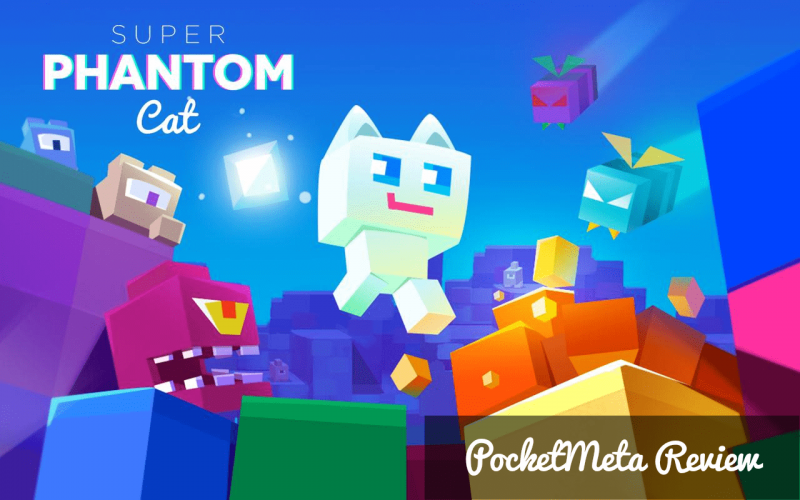 Super Phantom Cat is a new platformer that’s nothing short of brilliant. There you have my review. From the first cut scene to every bit and pixel, it’s addicting, adorable, good-looking and fun.

I had no expectation whatsoever from a game that is way too reminiscent of Mario, but the moment I started playing it, I felt its irrevocable charm work its magic on me. And the ingredients for success are – wonderful, polished design, smooth controls, variety of levels, mechanics easy to get the hang of and high replay value. It sucks you in, and suddenly does not seem that childish a game anymore. It’s a solid platformer. 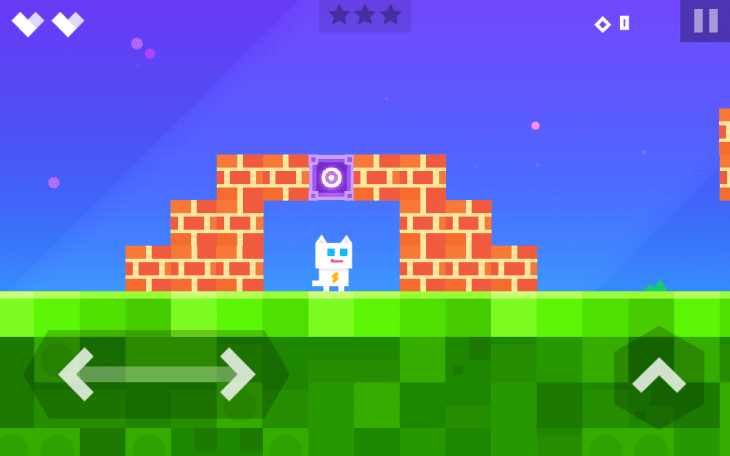 No reason to complain about the lack of original ideas here because the game wears its reference on the sleeve with pride. So what if it’s a homage to the good old classics like Super Mario, Donkey Kong, and Sonic the Hedgehog? It’s a pretty darn great homage and it looks stellar.

The design is very eye-pleasing, with clean layouts, vibrant and deep colors and clever color combinations. Each chapter of levels has a different color palette, and the more you progress the more you want to dig deeper just to see the next world. 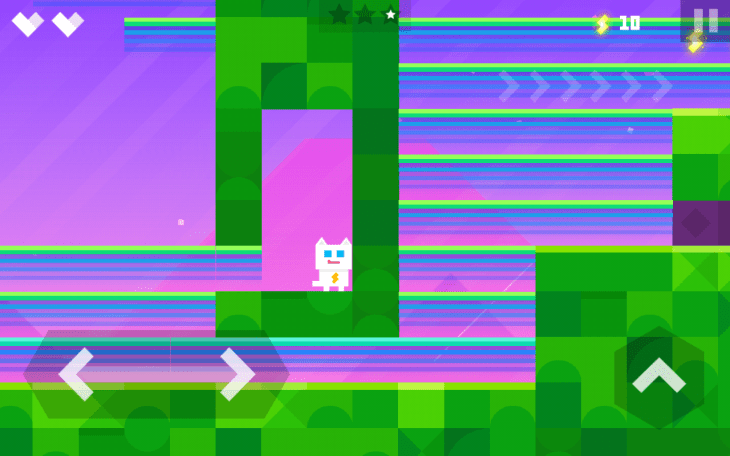 Story is totally secondary to the gameplay, but it certainly hooks the younger players on the go. I usually test age-appropriate games with my young nephews, and Super Phantom Cat is an instant love. With its cutesy yet brave hero named Chemist White and occasional help he gets from magical Super Phantom Cat, the cast is a total charmer. The basic premise is you get to help White Chemist collect data shards that let him evolve into different characters, with the ultimate objective to become the Super Phantom Cat.

The gameplay is a moderately paced, tranquil, yet very addicting platformer. The Cat walks the levels that are sets of walls, blocks and obstacles, pits and spikes, ghosts and bugs, bees and spiders, and what seems to be birds. Most of them will kill you if you fail to jump over and avoid them, or kill them first. Some of them can be helpful, like the little trampoline guy that shoots you several stores up if you land on its head.

The objective in each level is to collect as many data shards as you possibly can, stay alive and find the exit. Each level comes with a specific power up you need to find first to use. It’s most likely somewhere around the beginning of each stage, so look around closely. 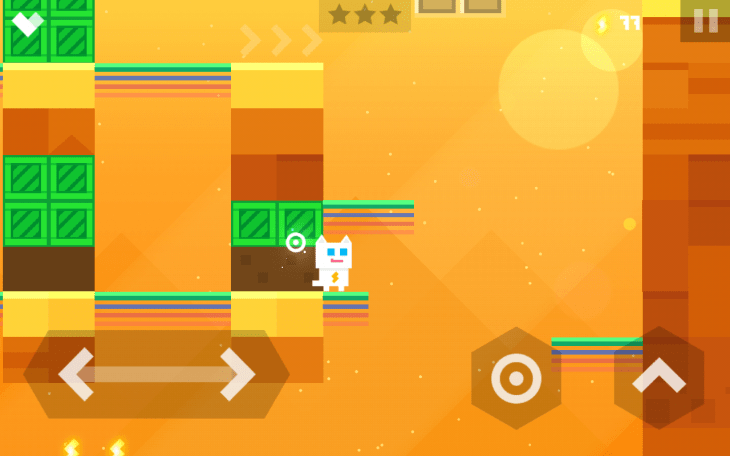 A little surprise element is Super Phantom Cat is you can never really trust the visible part of the structures around you. Approach some of them and discover they’re hidden passages filled with data shards. Some blocks, as you will learn early on, can be broken to extract the said data shards from them. Some blocks and passageways and platforms contain stars. Collect everything you can get your cat to grab.

The power ups are of several types, and you can only have one at a time. Some levels will have two power-ups, with the second one hiding somewhere mid-level. The power-up defines the peculiarity of the levels. For example, one power-up lets you cross walls, so its levels are filled with dead ends you can only overcome by crossing. Another power-up shoots light balls into the enemy, so its levels are filled with spike guys, and bees, and ghosts and other pesky yet cute inhabitants of the Super Phantom Cat world. Another power up lets you dash through floors down. Another is an explosive. 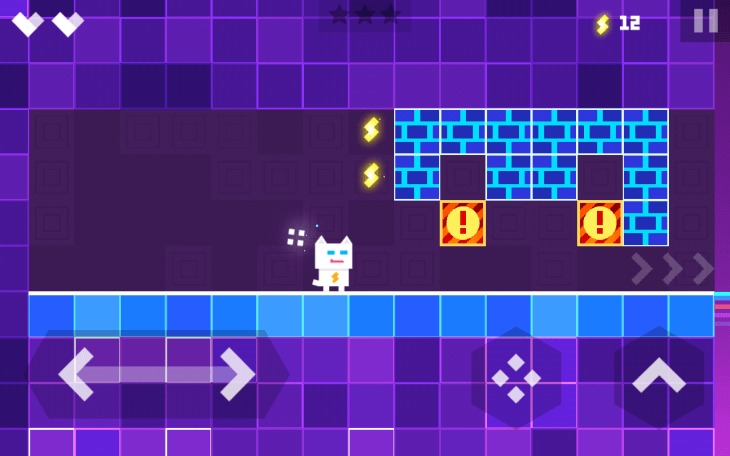 You will learn the peculiarities gradually. The game never feels overwhelmingly punishing. It’s challenging the good, enjoyable way. If anything, I get lost pretty often in the latter stages. I find the moderate pace of the gameplay very appealing, and quite the contrary to the twitch-like platformers that are crazy fast. However, there are a few levels that will urge you to move fast to avoid getting killed.

Super Phantom Cat does get quite hardcore at some point, but there is also a lot of replayability in each chapter as you chase the three star ratings and grind for data shards to unlock new characters. 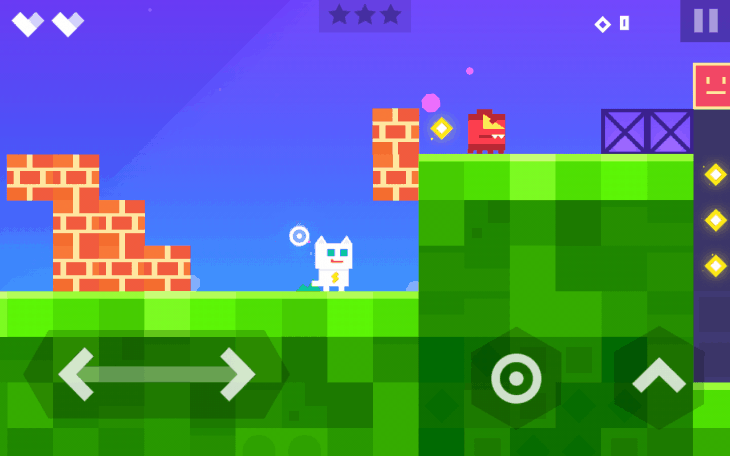 There are checkpoints, and sometimes you find a bonus life hidden in a level, in addition to the standard three lives. Add in a bunch of different contraptions – moving blocks, destructible blocks, ladders, trampolines, switches and many others, and you will never feel bored.

The additional characters are many, and all are adorable. There is Hermione, a small duckling, a green Android, a cop, a spaceman, a FNAF bear, a vampire, Flash and Mantis. But the Chemist White remains my favorite. The funny chiptune score adds a ton of ambiance to the gameplay, and the overall replay value is excellent. 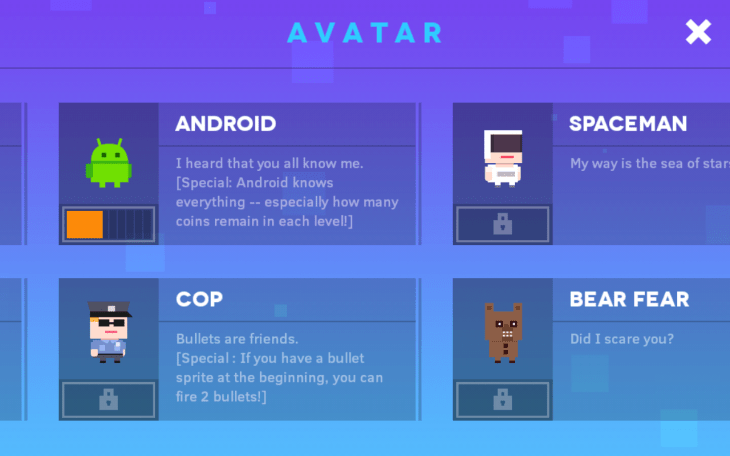 There are bonus levels, too. Sometimes, after a level the cat says a friend has sent you a challenge, and these levels are rich in bonus shards. 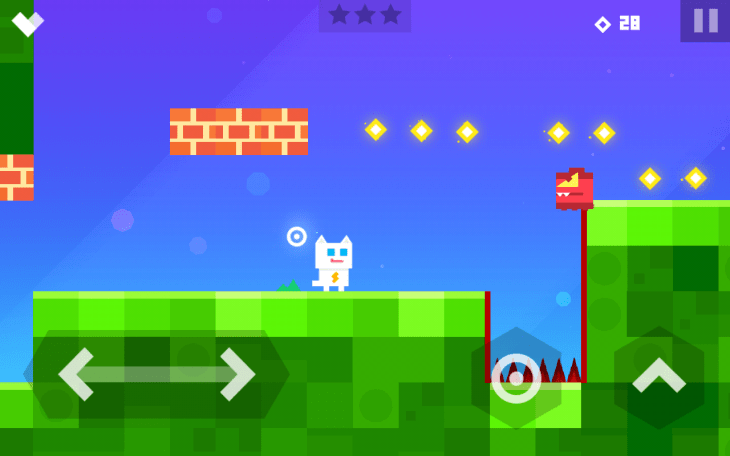 Some Android users report performance issues, but I have not run into any, even with the HD mode on 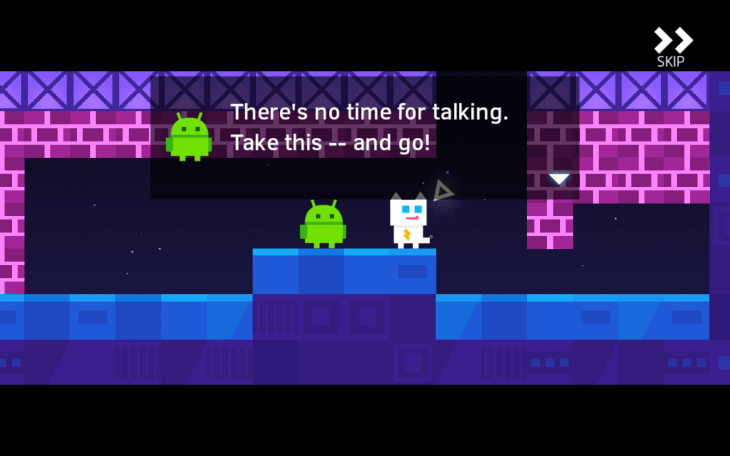 Super Phantom Cat is a masterpiece of a platformer, with crisp design, diverse challenges, neat controls and insanely addicting gameplay. It’s perfectly appropriate for hardcore gamers since its levels become increasingly challenging. At the same time, if you are planning on a family getaway or a road trip, make sure to have it on your kids’ devices because it’s a wonderful pacifier. Easily one of the best new platformers, Super Phantom Cat is a successful blend of the old and the new in the genre. Can’t recommend it more.

The developers kindly provided PocketMeta with a promo code for the Android version of the game. The review was not sponsored in any way.