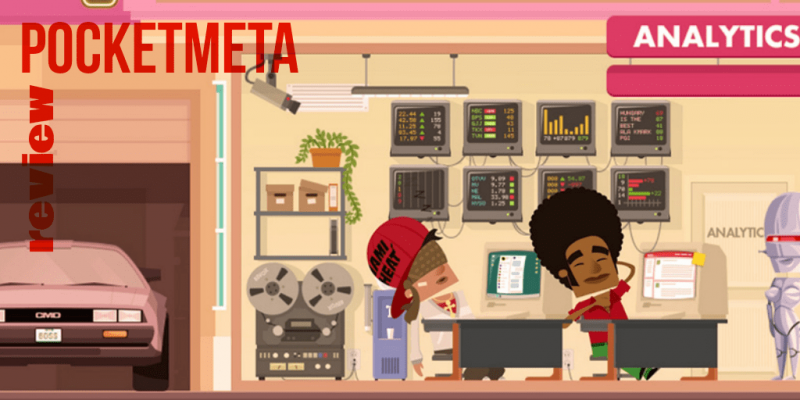 Guilty pleasure clicker games can be quite addicting when you play them in the adequate mood. Tap Company is one such game that can make a for a great time killer for a couple of weekends. Coming from the developer of Lost Sounds: Adventures of Poco Eco, Tap Company Startup in Miami was an instant download for me, and after a four-day tapathon, here are my impressions.

The story is obvious from the title. You run a gambling startup in Miami, and build a casino. To do so , you need money, and lots of it. So, you run an office of traders, analysts, a boss and some dudes in the conference room that generate that money for you. To make them work, you have to tap. The faster you tap the faster they generate the money. 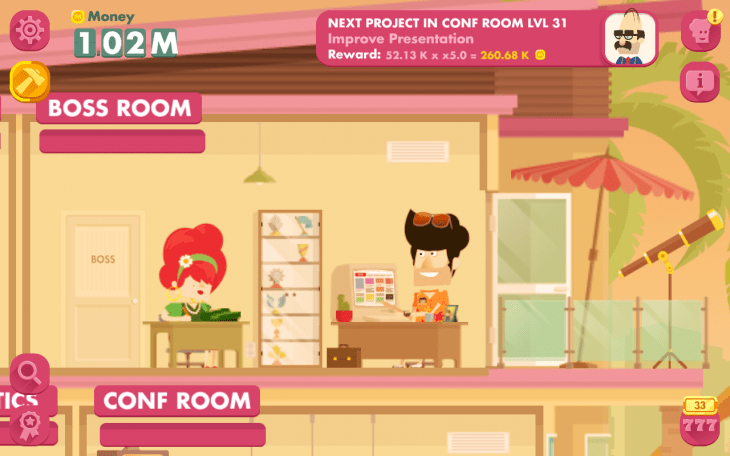 The office is laid out in four rooms you can zoom in and out, but the majority of the time you will have it laid out for the convenient tapping. I use all of my fingers, even though some of them don’t fit in. The frantic multi-finger tapping gets hilarious, especially as you see how fast your bank grows. When you have enough money, you can initiate the next stage of the construction.

Everything in Tap Company is tied into the level system. You need to level-up the rooms, the employees, and complete the 30 stages of construction. As you level up all that money-making machine, new workers become available for unlocking. You level up the rooms for money, and every once in a while each room will challenge your tapping skills with a project. A project will have you tapping as fast as you can in a particular room and you have to out-tap the count down timer for the project. It is only after you complete a project that the subsequent level up of that room is possible. If you are having trouble completing a project, consider leveling up the room’s employees or get a power-up in the casino. There is a casino vault where you can gamble by using tickets you earn when leveling-up. Sometimes, you earn money, sometimes power-ups. However, the main secret of a successful project is the employee level-up, or training.

Besides hiring new employees, you will be able to invite the guests to gamble in your casino. They will increase your luck meter, which will help you earn better power-ups in the slot machines. The guests can be leveled-up, too.

The employees, the boss and the guests have been made with quite a doze of humor in mind. CC Catch, Gorbatchov, Ghandi, a female robot and a lot of funny characters with specific animations mock the office life with quite a sarcasm at times.
Once in a while, you need to catch a flamingo or scare the heck out of a postman and they will drop the gamble tickets.

Visually the game is a bright cartoon-style golden coin shower. Despite the cartoonish design, the looks are detailed, and the character animations are worth a zoomed-in look. 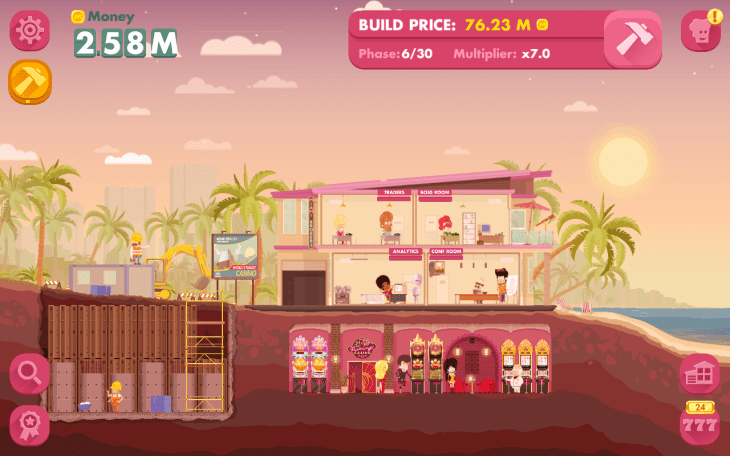 I have not had any performance issues. What I found distracting though is an odd nag in the Traders room projects that seem to be way more difficult that the projects in the other three rooms. As a result, I need to level-up the traders while the others lag behind and still complete their projects from the first try. It feels like the game needs a little more balancing.
Also, on the down side is the significant slow-down in the pace of the game some time after your rooms reach level 50 and your construction reaches some stage 7. The cost of the construction becomes cosmically disproportionate to the money the office generates, so the game gets a bit stale. You have to tap a lot longer to generate enough money to level-up the rooms, the workers and complete projects, while the construction remains unaffordable.
It is for the same reason that the casino and the guests remain largely unused. I have bought some 6 guests, but never seem to have the money at hand to level them up. Hence, my power-ups are few.

The game needs to have the increase in the challenge curve, yet this noticeable halt in the progress feels somewhat discouraging. The description suggests an unexpected twist, where you may discover you are building something that can change the fate of the planet, but I have yet to see where that happens, or if it happens before the addiction fades. 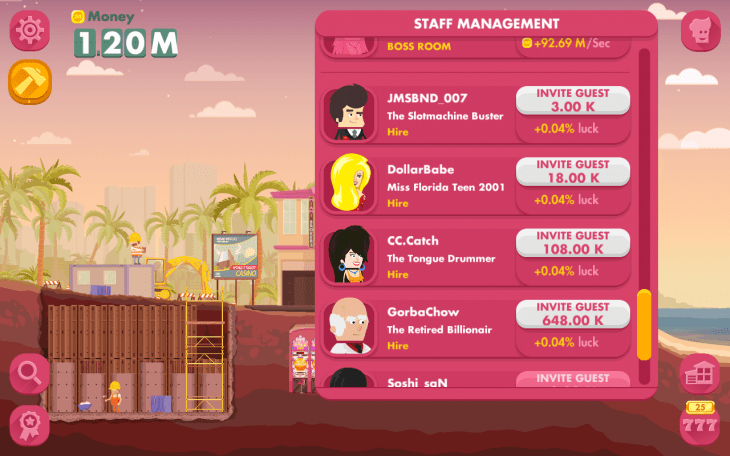 The game is freemium, and ad-supported. IAPs include an ad-free game for $1.99, and packs of playing chips worth $0.99-$9.99. It’s either that, or grinding after you reach a certain level.

Tap Company Startup in Miami is a colorful and fun time killer for those times when you need to relax and indulge in some guilty pleasure tapping. It has the good looks, a fine sense of humor, and lots of things going on. Despite being the tapping game, Tap Company is quite eventful, populated and well done. Try it if you like to watch that gold flow – it’s definitely one of the best clicker games. It needs some balancing, as we noticed in the performance section. Other than that, it’s a fun time killer for the right player, or the adequate mood, and quite addicting while the novelty lasts.