This Is Not A Test recently landed on Android, and it already got into several of our roundups – the best new games of February and Top 20 Mobile Gamebooks. It is a bit different from the rest of the titles in the niche, and in many ways, its differences serve it right. A work of art, TINT should be definitely on your playlist, if you like choose your own adventure gamebooks, comics, pulp and survival RPGs. 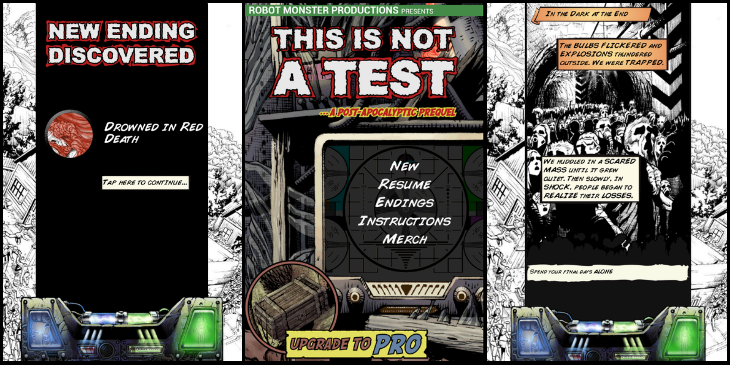 Apocalypse is all over the gaming industry, and the movies. Thankfully, the indie developer Robot Monster Productions spared us the pain of dealing with the zombies, or a crazed AI on a killing spree. We are dealing with a war here, but from a regular civilian’s perspective.

A few months ago, hundreds of Londoners reported on Twitter seeing UFO in the night sky. They elaborated on the subject, suggesting it may be some hi-tech aircraft, or maybe a Russian invasion. One tweet was of a particular interest – a woman said “this is how we will know the WW III started – from Twitter.” TINT does not give you the luxury of having a fancy smartphone with a Twitter account, so you can check what is up. Instead, it puts you in the middle of a highway, somewhere in the suburbs, where you can’t google for more reports.

It’s the war – “hostile states” have launched a chemical attack on the United States, and all you know is the explosions are coming from all directions, intoxicating the air, land and everything on it with its murky red poison. Human skin, lungs and guts burn with the acid fumes, and the death toll is horrifying.

How you survive, if you survive, depends on your choices, luck or God’s will, and the choices of the people you surround yourself with, if any. Gloomy, depressing, hopeless, surprisingly cruel in its realism, TINT is your next mobile shot of adrenaline. 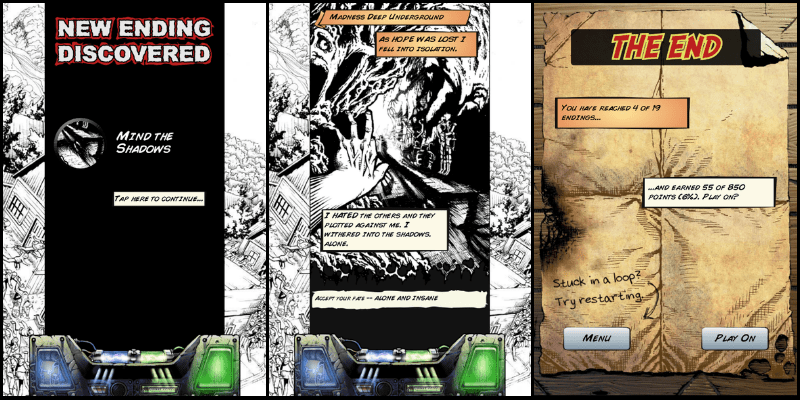 The game is dubbed as a prequel, which brings a promise of the new adventures. Right from the start, it throws you into a life or death situation – you are driving a truck, going about your routine business, when you hear an emergency warning on the radio. A mass evacuation has been ordered, and all civilians need to reach fort Eisenhower. A slew of choices arise next – stop by a diner, listen to the news, scout for supplies, save yourself.

The first time you play, the game explains its own UI and mechanics in a clear, concise manner. The text is minimalist, and the entire gamebook is laid out a a comic book, which means descriptions are brief, but meaningful, and so are the dialog bubbles.

If you see a new character, you can tap its icon to expand a short description or a comment from them. If you see an option to scout a place for supplies, or anything that can come handy, always do so, and don’t forget to tap on the option to pick up the discovered items. 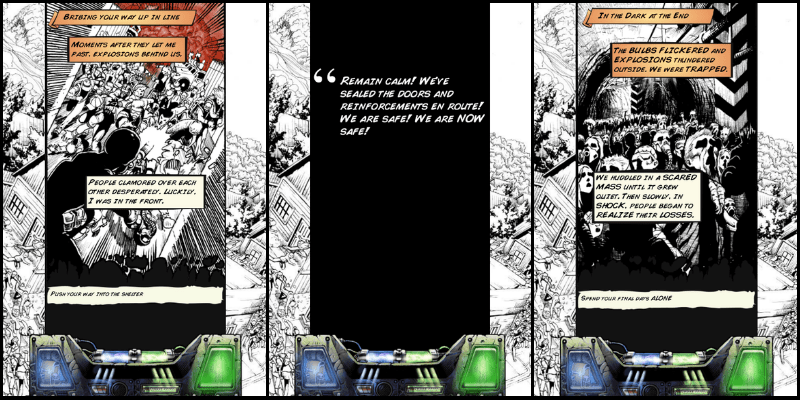 As you might have anticipated, there will be plenty of choices when you can either save someone, let them die, or kill them. Which way is the right way is totally up to you, and I suggest you play as many games as possible to discover that sweet spot, which brings out the optimal way out.

One nifty feature I noticed is the surprising variety when you play a seemingly similar path. Someone suggested there might be a random dice throwing behind the scenes, but that is not how I see it. Say, you stop by a diner, listen to the news, talk to the bartender, and then scout the diner for supplies. You find a bottle of water and a few cans of food. You think you know this part the next time you play, so you skip talking to the bartender, listening to the news, and proceed quickly to scavenging for the supplies. Boom – there is no food, just a bottle of water. 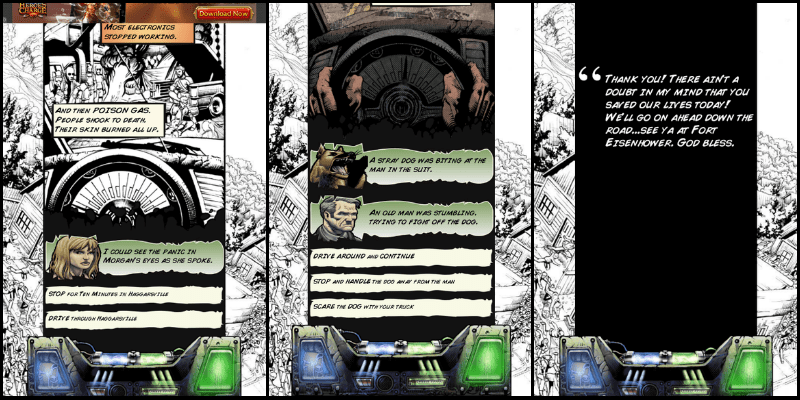 Likewise, you think you know the Fort Eisenhower is a trap, so when you end up there again on your next replay, you expect to die soon, but the items in your backpack are different from the previous set, and instead of dying there, you bribe your way past the guards and enter the shelter just before the next explosion.

The game features 19 endings, and trust me, you will want to unlock them all simply because very few of them are satisfying. At the same time, reaching that lucky survival ending is extremely rewarding, and the entire experience lets you appreciate not only your own experience with the options, but also the luck that follows the right decisions.

That said, get ready to die a lot, and read quite a lot of death descriptions. 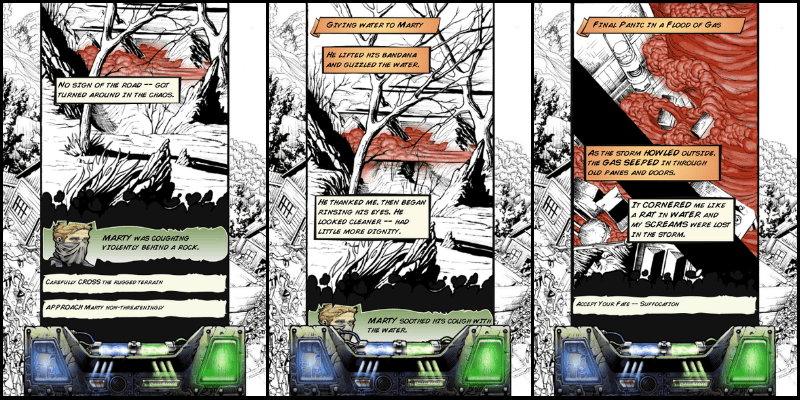 Another significant element that adds tons to the replay value is the RPG-style skill set. At the beginning of each new game, you choose three skills for your protagonist – driving, marksmanship, brawling, cunning, tech, and survival. That skill set of three qualities define the options you face during the gameplay. Hypothetically, you can win with any skill set, but you will have to keep digging if you have enough determination to pursue a happy ending with one and the same set.

At the same time, the very variety of combinations of skills creates an even greater replay value. 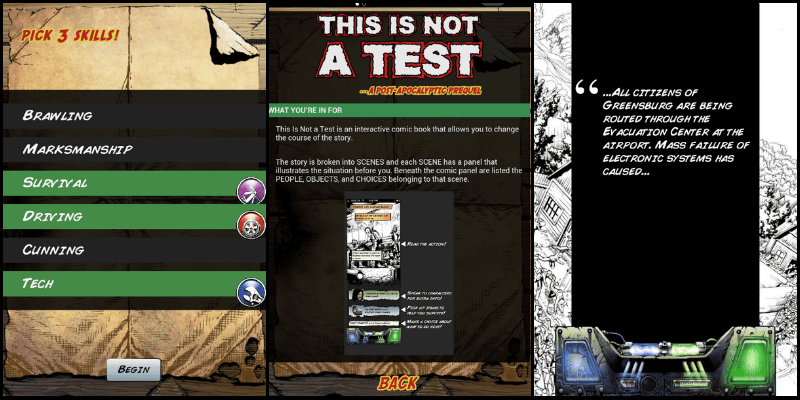 TINT saves only one game instances, and only one checkpoint in it while there are many checkpoints. What this means is when you die, and would like to make a different choice, you can’t go several checkpoints back, but are limited by the last checkpoint only. I see it as a drawback because if I want to replay from an earlier checkpoint, I need to start the game from scratch. Nonetheless, it is good it offers at least one save slot. 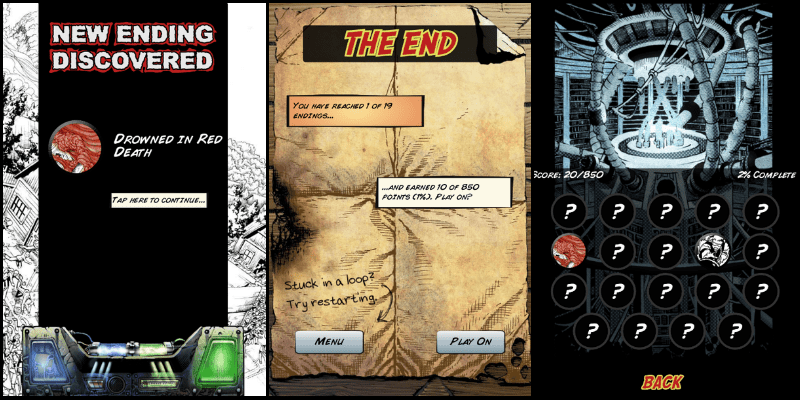 The UI and options to pick an item, or view an extended dialog are transparent and easy to get the hang of, so never will you feel lost. Not in the UI, at least. 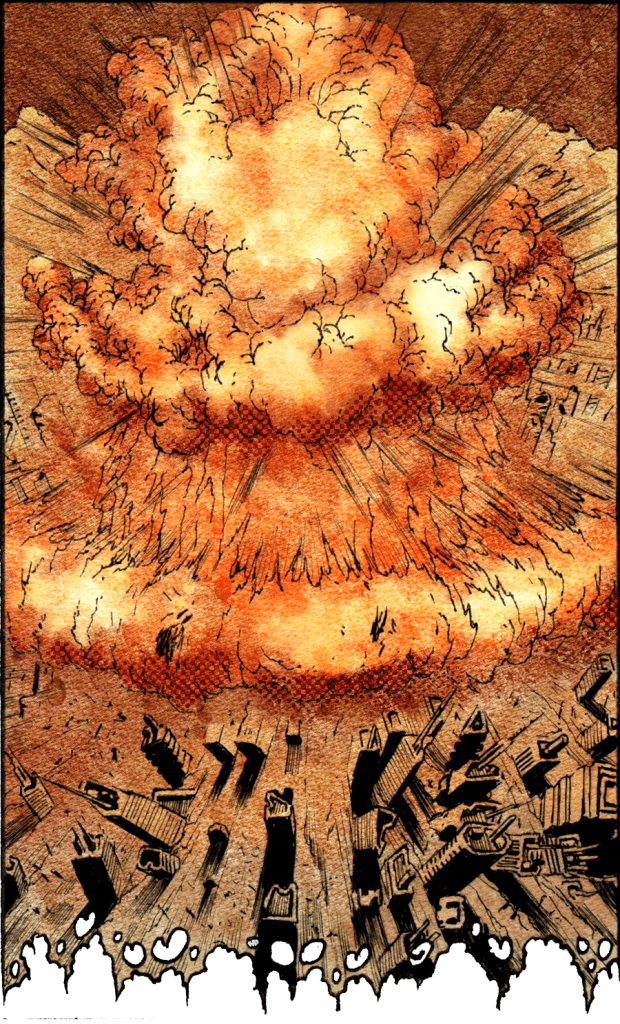 TINT is a hand-drawn comic book, and illustrations by comic artist Jeff Edwards are perfect. In a free edition, they are black and white while in the Pro version each panel is colorful. The game even lets you play a few minutes with the Pro design on, so you can make your choice. As usual, we encourage you support the developers, and show some appreciation of the hard work they put in the game.

The art style is gritty, gruesome and harsh. On the one hand, you don’t want to stop by a lake to marvel at the nature’s beauty, no. There are no such images that make you want to pause and take a closer look. On the other hand, the eerie, sometimes disgusting imagery is what creates the atmosphere of doom and urge to move quickly from one panel to another, searching for a way out.

Overall, the art style of TINT sets it apart from the multitude of other games in the niche, and does a great job of creating the atmosphere of demise.

The concise, descriptive and sometimes explicit writing makes up for the actual brevity of the textual element itself. Unlike many other gamebooks, TINT does not make you read hundreds of text-filled pages, but limits the screen real estate allocated to text mostly to action-filled bubbles. It makes each gameplay a quick session, and adds a ton the variety and replay value.

TINT is abundant in nifty sound effects, like zipping your backpack, or sounds of a person drinking water in huge gulps, or a panicking crowd. When there is music, it is gloomy and anxiety-inducing, so settle in for an engrossing gameplay. 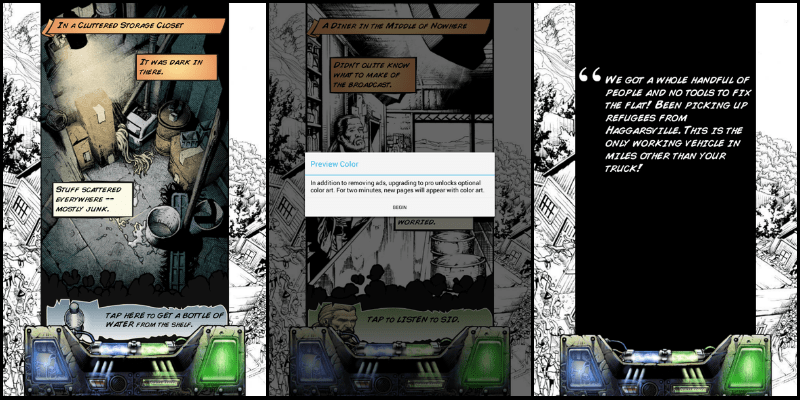 The free-to-play edition sports black and white art work and non-intrusive ads while a single $3.49 in-app purchase removes ads and unlocks the colorful design. If you can’t afford that, you are totally fine playing the game in its minimalist outfit – it does not affect the gameplay, or the endings you unlock.

I have not experienced any technical glitches during my week with TINT, nor have I read any user feedback that reported any performance issues. The game runs smooth, and consumes a modest amount of your device’s resources.

An excellent pulp read, This Is Not A Test A Survival RPG Comic Book is a must-have for any fan of the gamebooks. It is refreshing in its story, writing and style, and does a great job without mimicking the other popular plots. The gameplay sessions are brief, offering a great variety in the situations you thought you have figured out, and with the 19 endings, the game offers an excellent replay value. We sure hope the ‘prequel’ in the title on the developer’s website does suggest there is a new chapter in the works at the Robot Monster Productions. In fact, you can send your ideas and suggestions over to the developer, and who knows – maybe the second game in this apocalyptic series will credit you, too. Until then, get the game!