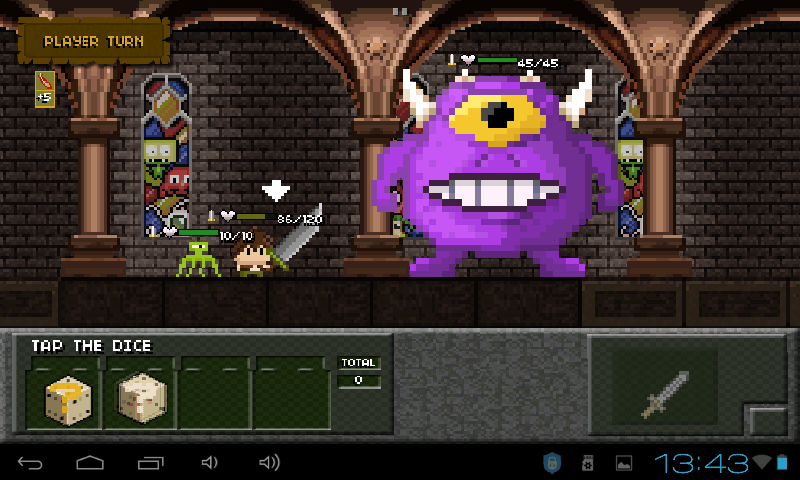 A little note in advance – I was quite skeptical when downloading Tiny Dice Dungeon. I am definitely not the fan of the pixel art and the RPG genre. Oh, and I am not a fan of dice, or the dungeons, either. Nevertheless, I am still rolling it, and the funny soundtrack keeps playing in my head whenever I put my tablet down. It still beats me how this seemingly light-headed RPG got me wrapped around its finger, but if it managed to hook me, RPG fans, as well as retro-style gaming aficionados will definitely love it.

The story goes somewhere along the lines of a distant future where humans battle monsters in all whereabouts, but mostly in dungeons. You are lonesome knight travelling across devastated villages, fighting horrendous monsters and bringing life back to the villages. You can tame a monster to fight by your side, and you can put the monsters in cages. You can also craft powerful dice of many kinds, level up, grind for loot. That’s 5% of the game.

The rest 95% is dice rolling and monster battling, and that is surprisingly addictive.

You collect some dice as you progress through initial levels, and soon you are able to roll as much as 4 dice many times, accumulating the attack power. However, be careful because when you roll a 1 – you miss your attack turn. The luck factor does have an influence on the outcome, but so does the grinding for loot, leveling up, mingling with different dice.

It’s a turn-based RPG, and you attack first, then your monster attacks the enemy monster, and then the enemy monster (-s) attacks you back. All of you have the life bar, which diminishes with each enemy hit. The game is static in the core, and all the fighting is about rolling dice and watching light bulbs fly in between the parties. 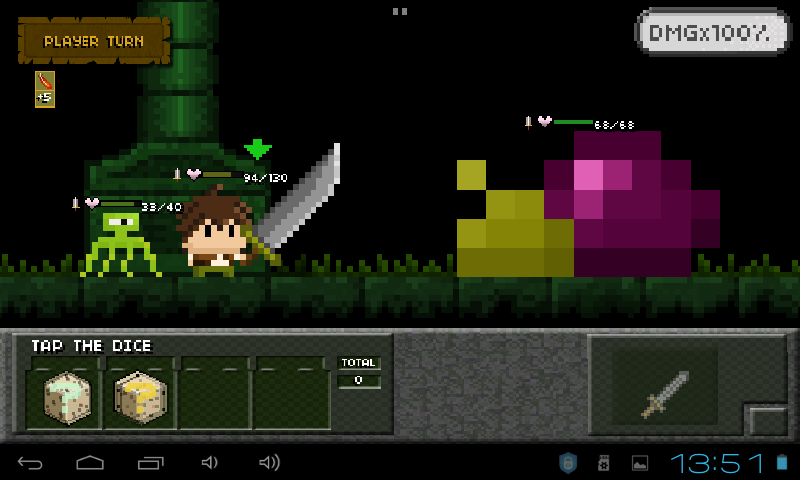 The controls are simple, intuitive, responsive and transparent – tap the dice to roll on the left; tap the button on the right to attack. Navigating the game’s interface takes a little getting used to before you sort out all the things you can or should do. For example, re-build the huts in the village, produce some powerful dice, manage your monsters and upgrade your character. There are a lot of layers to the game’s UI since each level-up unlocks something new you have to wrap your head around, and sometimes I feel I’d rather avoid that part of the game and keep rolling dice.

Tiny Dice Dungeon will suck you in the moment you launch it. Starting with the catchy soundtrack, on with the horribly persistent little voice inside your head that keeps telling you ‘just one more roll,’ great deal of monster fighting, the repugnant boss monsters, and some rewarding loot here and there, it’s pure fun for the fans of the RPG genre.

If you have the time to appreciate numerous little details, such as talking raccoons, or fun names of the monsters, you will pay more attention at the great deal of work that’s been invested here. In fact, I would say the developers wanted to jam as much of the genre goodness in this game as possible, but much of that remains secondary because the ultimate fun here is to ride the express train before the fight, and roll the dice trying your luck during fight. The rest is fun for grind-lovers, but somewhat excessive for everyone else. 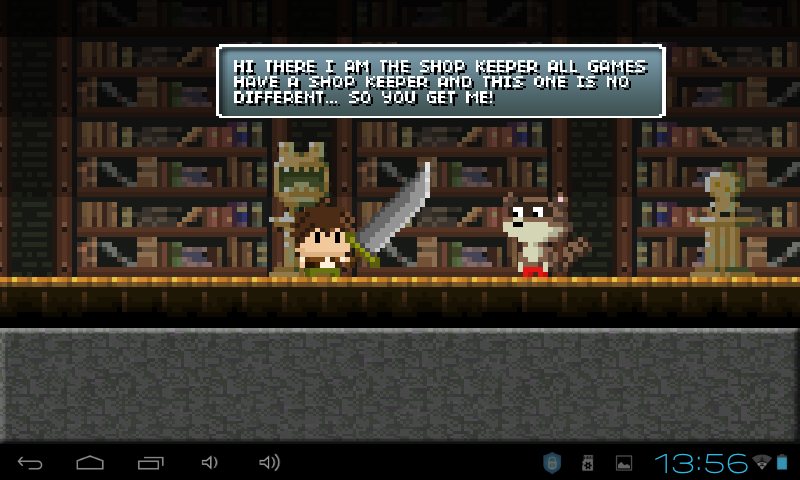 For example, you can catch a monster by drawing the exact number of points he has left in his life bar, or you can earn extra money by drawing more points than your opponent has left in the life bar, but most of that remains behind the scenes, unless you are very attentive to detail. The first week I played, I only noticed coin I had to tap to collect and didn’t think much why or how I got that monster to be my pet. Overall, if you like complexity, you will enjoy uncovering new details, but to me it feels a bit to complex to be fun. 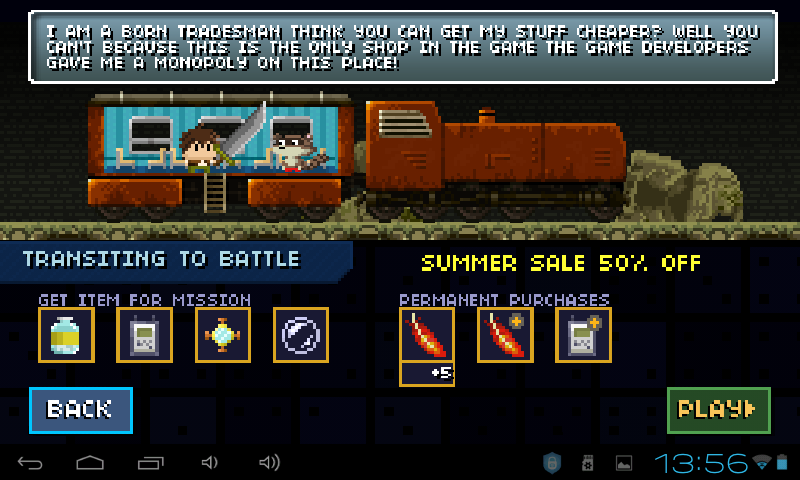 The 8 or 16-bit, as they call it, style does not add up here, but that’s just a subjective opinion. At first, I couldn’t explain the nagging dissonance, but then realized the difference between the villages and backgrounds and the hero with the monsters designs. While village is drawn with fine detail, scene backgrounds are also quite distinguishable, the hero himself and the monsters are just huge staring pixels, and they are not cute, or pretty, especially when they get poisoned.

I went through player reviews, and apparently, people love the design, so disregard my whining, but the pixel style is not my favorite part in Tiny Dice Dungeon, although I could tell the game was done with great love and nostalgia for the retro games. 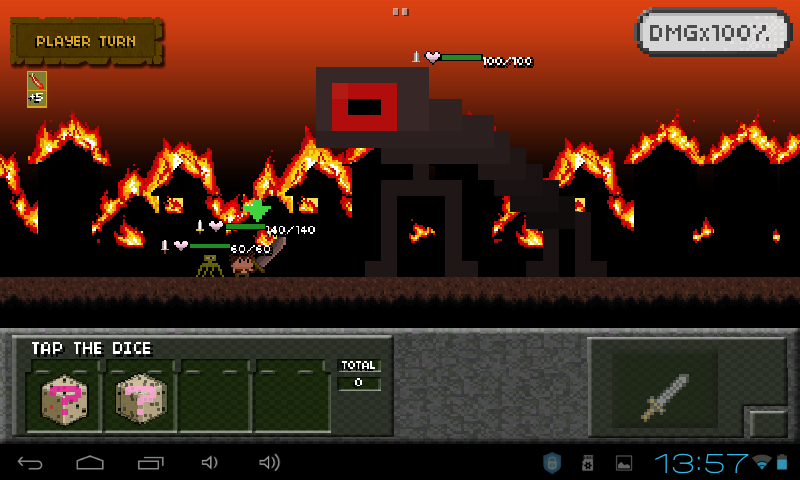 You can play free of charge, and occasionally you will have to wait for the energy bar of your character and his pet to replenish. Overall, the free-to-play model here lets you play without spending real money to a certain extent. It totally depends on a player, at which level in the game you hit the glass ceiling of pay-to-win, when all the dice you roll suddenly hit 1, and you miss 5 turns in a row. Or, maybe that was the ‘luck’ factor.

The main in-app purchase here is uncut dice, which you can craft into dice that is better than your current dice, and the prices are somewhat high here – 5 dice will set you off $2.49. Without that, you will have to do some diligent grinding to get that uncut dice, or any rare dice that would enable you to up level your weapon, or capture a monster. 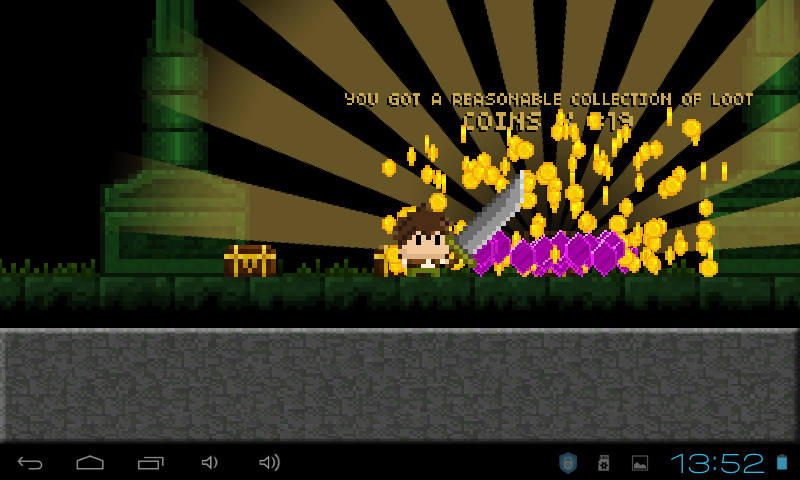 Tiny Dice Dungeon offers a unique combination of turn-based RPG, dungeon monster fighting, pure dice gambling and infinite grinding for loot, power and leveling up. It is both fun and addictive, although the interface is somewhat crowded, and the design does not appeal to universal audience. The IAPs are not overly intrusive, but unless you are ready to pay for uncut dice, get ready to spend regular gaming sessions grinding. The game has an undeniable charm, and is a definite hit for both the fans of the genre and any passer-by looking for a quality and catchy time-killer.