We all have our faults, and mine is the irrational passion for casual train sim games – I even made this list of The Best Train and Railroad Games for Mobile. I loved traveling by train as I was a kid, and indulging in these guilty pleasures lets me revive that childhood joy of riding a train, or driving it, as is the case with the Train Driver 15.

There is no story as such, but each time you play you will be on a mission of delivering freight or people. That’s how the main menu makes it all pretty straightforward – as you launch the game, there are two main choices – Freight or People. It should be noted that the gameplay of the two different modes does not differ much, with the exception of one thing – when you drive people, you will have one or two stops, where you have to let the passengers in and out. The rest is pretty identical.

You get yourself an engine, and there is quite an impressive selection – starting with quite simple engines that look meh to the fancy retro steam ones and electric, inter-city and subway engines that look very cool.

So, when you choose your engine, you proceed to the next screen where you need to choose your location. These are quite compelling to try and vary from the Free Ride to location-specific in the USA, France, Italy, Romania, Germany, Australia, Canada.

The really fun part is the weather options that come right under the location setting screen. You can choose from the day and night mode, and add one of the weather conditions – sunny, rainy, snowy, foggy.

Not to get too demanding, I should warn you – the rainy weather is boring, while the snowy settings are wonderful. Riding somewhere along the snowy hills of Canada gives you that Polar Express feel, especially if you unlock the fancy black steam engine.

Here is how it goes. The game is dead simple even for a preschooler to pick up and play, and there is a tutorial that takes you by the hand and shows you the ropes.

The gameplay screen has one huge lever at the bottom right side, which you can pull or push, depending on whether you need to speed up, slow down or stop. Right above it, there is a button that changes the direction – backward, forward. In the bottom middle part of the screen, you can see your speedometer and an indicator of the maximum allowed speed. Your speedometer will go red if you exceed it.

The timer next to the XP shows you the time you have left till you need to be at your destination point. Being there on time earns you XP. 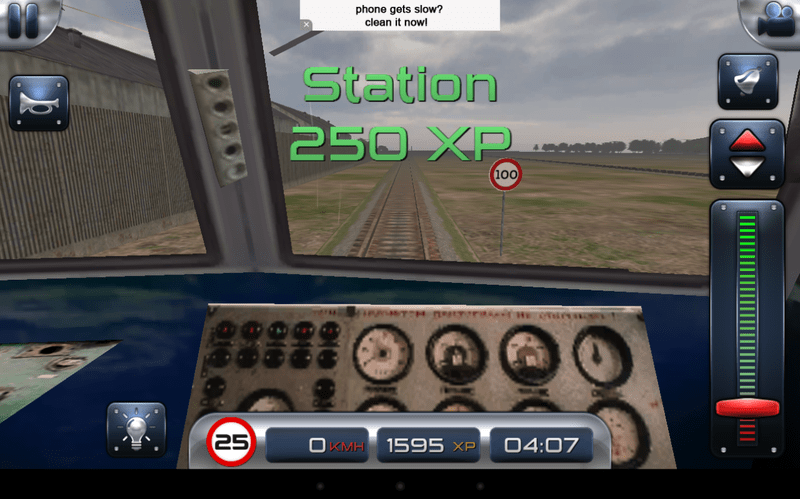 There is an option to turn on the engine light, if you drive at night or go through a tunnel. There is a whistle and a bell – one is used to let the passengers know you arrive and leave, the other is to warn the cars when you approach a road junction.

As I mentioned, the people missions will have you pick up the passengers at one or two stops before you reach your destination. The freight missions, on the other hand, will have you hauling quite a few cars loaded with stuff like coal. 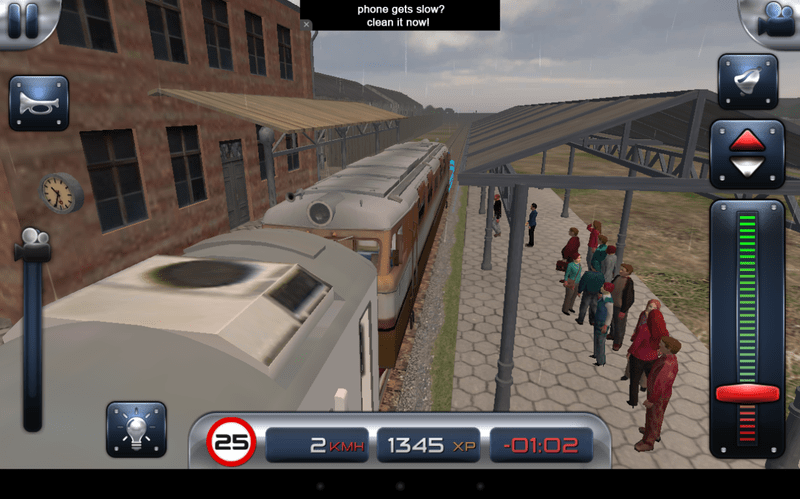 There are several camera angles, and you can view the whole action right from the driver’s cabin, or from the side. You can also pan and zoom, change the angle by tapping, holding and dragging until you find the perspective you like best. It’s pretty entertaining, especially when you drive passengers.

Each action performed according to the game’s rules, like blowing a horn before approaching a junction, or getting to the destination on time, earns you XP you can later spend on new engines.

Missing a stop or being late, on the other hand, will cost you the said XP. 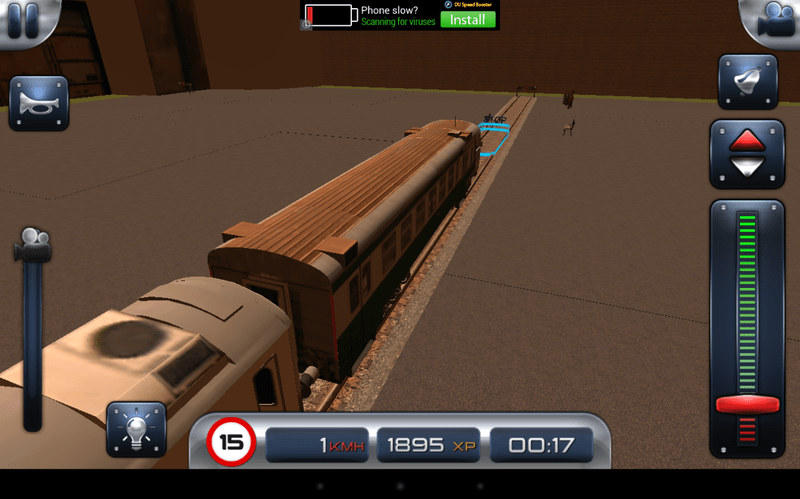 Train Driver 15 is a pretty relaxing experience. The initial missions with the low-tier engines are somewhat slow, but when you unlock better engines and get the hang of the gameplay, it becomes quite enjoyable. I can’t say it’s overly realistic because there is zero interaction with the environment except for letting the passengers in and out. There are no other trains you need to let pass first, or any trains that would drive the opposite direction. The tracks switch automatically, and you can not crash. The passengers look pretty much the same, and don’t do the crazy stuff people do – like coming too close to the edge of the platform and waving at the driver, so spitting on the tracks, or throwing stones at the engine. In other words, this game could use a little bit of spontaneity in its environments. Overall, however, it is quite an addicting experience when you do not expect the things it doesn’t offer. It’s a rather laid-back, zen-like experience set in a safe world where you get to abide by the rules, earn XP and unlock cool engines. If that sounds like your cup of tea, you will definitely enjoy it for quite a while. Especially considering it’s free-to-play done right. 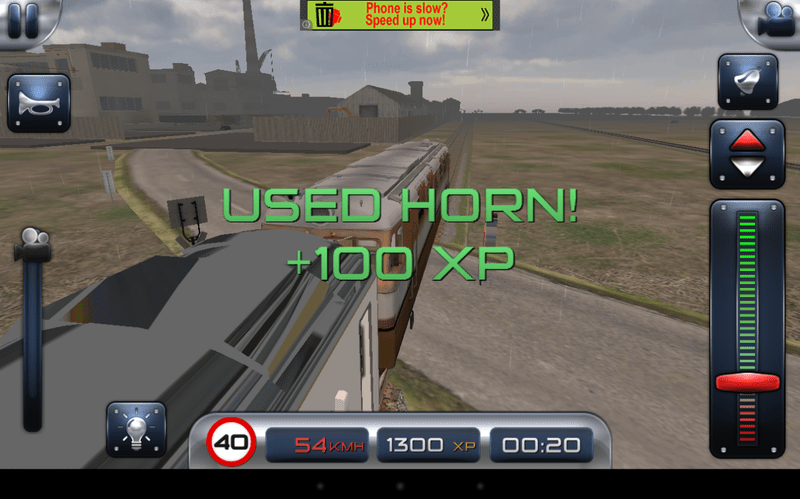 Each engine has a price tag, and you can unlock them via two options. First is to play with what you have by default – a very simplistic and plain looking engine and gain XP that will unlock you more trains. The second one is to buy all trains in a go for $5.99, or one by one – each individual engine costs $0.99.

Thankfully, the locations and weather conditions are available for free, by default.

The game is ad-supported and there is an IPA to remove ads, too. All things considered, you can play for free and tolerate a few ads, or you can support the developers for the great job they’ve done here.

Now, I have read the user reviews praising the visuals, but I am not that fond of this particular style – it looks like 3D, which is too simplistic and too plain to look impressive. The textures and shades look mediocre, but hey, the game is free and runs very smoothly on my device, so the extra coat of paint could affect the performance. Also, the view from the driver’s cabin includes the view of the panel, which is just to ridiculous to show off – it looks like a picture of it, with no illusion of interactivity.

I am, nonetheless, quite engaged in the action and appreciate the smooth, peaceful and catchy soundtrack, which is just the right thing for the train sim. Overall, the graphics are good, but a bit simplistic. On the flip side, the variety of locations and weather options gives you the opportunity to explore the different looks and find the one you like best. 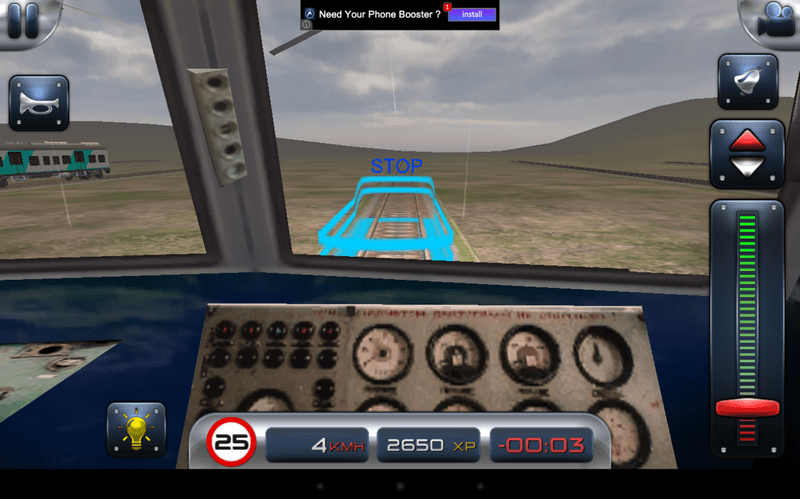 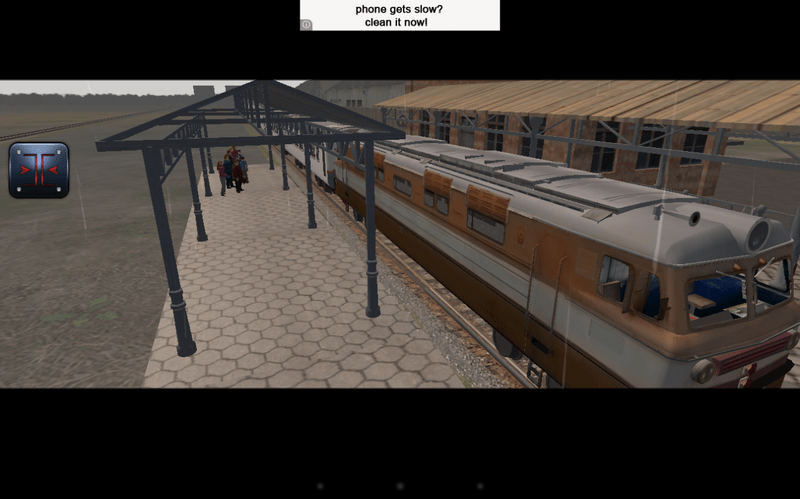 If you are a train aficionado like myself, you will enjoy this game for it’s one of the best available on mobile by now. Some users request more life-likelihood, such as crashes and accidents, but I appreciate the safety of the current gameplay, which has you driving the freight or passenger trains, be on time, blow the whistle, honk the horn, mind the speed and look at your train from different angles. Train Driver 15 also offers an impressive variety in the engines and locations, and one of my favorite features is the weather conditions that let you drive the summer and winter locations. It may look a bit on the simplistic side, but its performance is very well-balanced and the difficulty is quite mild, so players of all ages can pick it up and play, with addiction and dedication or casually. Its freemium model is non-intrusive and you can play without paying, by grinding a bit for XP to unlock better engines. Overall, Train Driver 15 is a great entry in its genre and will keep you poised when you’re too stressed out.