It seems as though premium mobile games with an engaging story, top-notch design, and an emphasis on innovation — are few and far between. Although some may see that as a negative thing, there’s no denying that it makes it even better when we do get a game like that. Transistor is a game that’s already been around for about a year on PC, but it recently made it’s way to iOS, and it appears to meet all of the criteria I mentioned above. Supergiant Games is the developer behind this release, and we’ve already seen excellence from them in Bastion — all of these facts combined set high expectations, so let’s see if it lives up.

I’ll try to refrain from doing this too much, but there’s a lot of comparisons to Bastion that pop out. The biggest one for me was the design of the game, which is phenomenal, and anyone who has played both games can easily tell they’re from the same developer. Transistor immerses you into it’s unique world, and puts you in the shoes of Red — the female protagonist who has quite the interesting story behind her.

Honestly, this game is just as much story oriented as it is combat oriented, meaning you’ll spend about half of your time listening to dialogue/exploring, and the other half in battle. In the beginning, you don’t really have a clue whats going on, but as you start to progress in the game the pieces will begin to fall into place. You actually start somewhere in the middle of the story, so there is some backtracking, which is part of the very unique story-telling method used throughout the game. 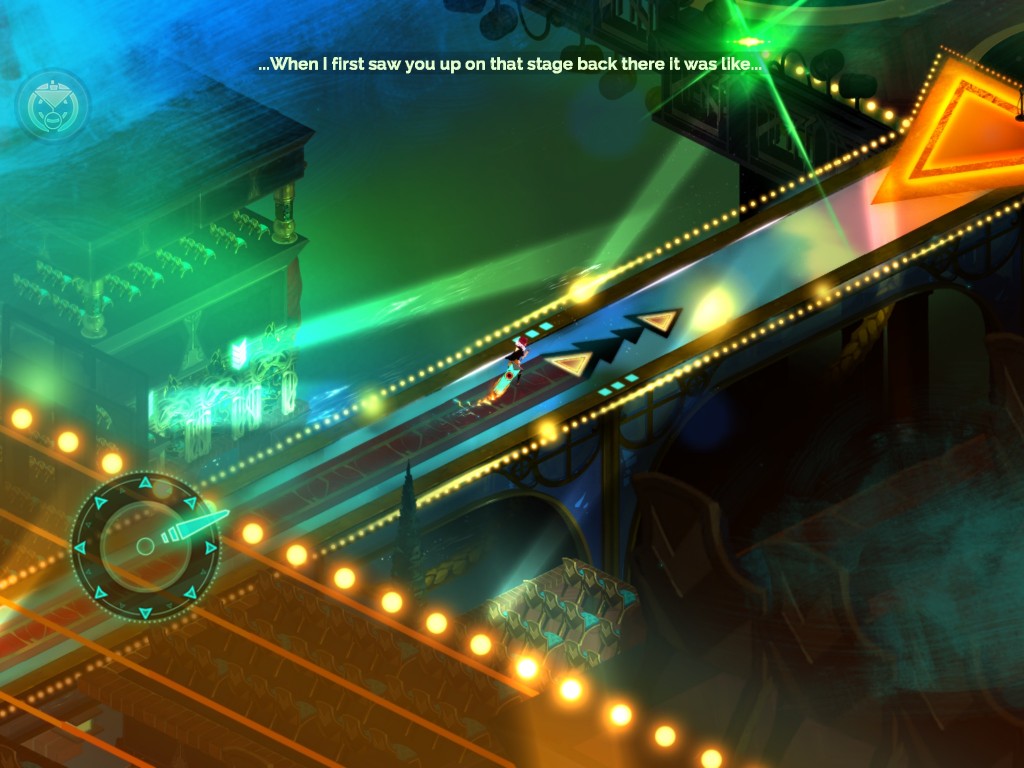 Looking at things from a cosmetic and narrative viewpoint, this game really knocks it out of the park. Of course Gameplay is important as well, and we’ll get into that, but I can’t say enough good things about how everything is laid out. The UI feels great as well, there isn’t much clutter, which leaves more room to enjoy the beauty of the game. The combat Interface goes away when you finish a battle, which is just one of the many little things that contribute to the overall masterpiece.

There’s a few key aspects to the fighting in this game that really make it stand out compared to other games with the Action-RPG label. First, you’ve got the “turn” option, which can be extremely useful when utilized properly — but not necessarily a requirement. Basically, you can activate this to freeze time and plan out a few actions, including movement and using a couple abilities. If you play your cards right, this can make certain encounters 10 times easier than if you try to fight them in 100% real-time, but again, it’s not required.

Putting all of your abilities together is what really allows you to fully customize Red. Between the non-linear unlocks of new abilities, and the millions of different function combinations you can create, there’s no room for cookie cutter builds in Transistor. Anyone who enjoys character customization with extreme depth will be interested in what this game has to offer. However, I still felt that the game was pretty easy regardless of what build you ended up with, which made it a bit less exciting when you do come up with an awesome build.

You’ll get at least five or six hours out of Transistor, and that’s if you just play through the main story as quickly as possible. For those who want to explore the game world a bit more than what is required, you can squeeze out a couple more hours. Once you complete the main story, you open up “recursion” mode, which is a bunch of all new battles to fight. Recursion helps make the in-depth character building a tad more relevant, as this is purely combat oriented, unlike the main story which really doesn’t have a major emphasis on battle. 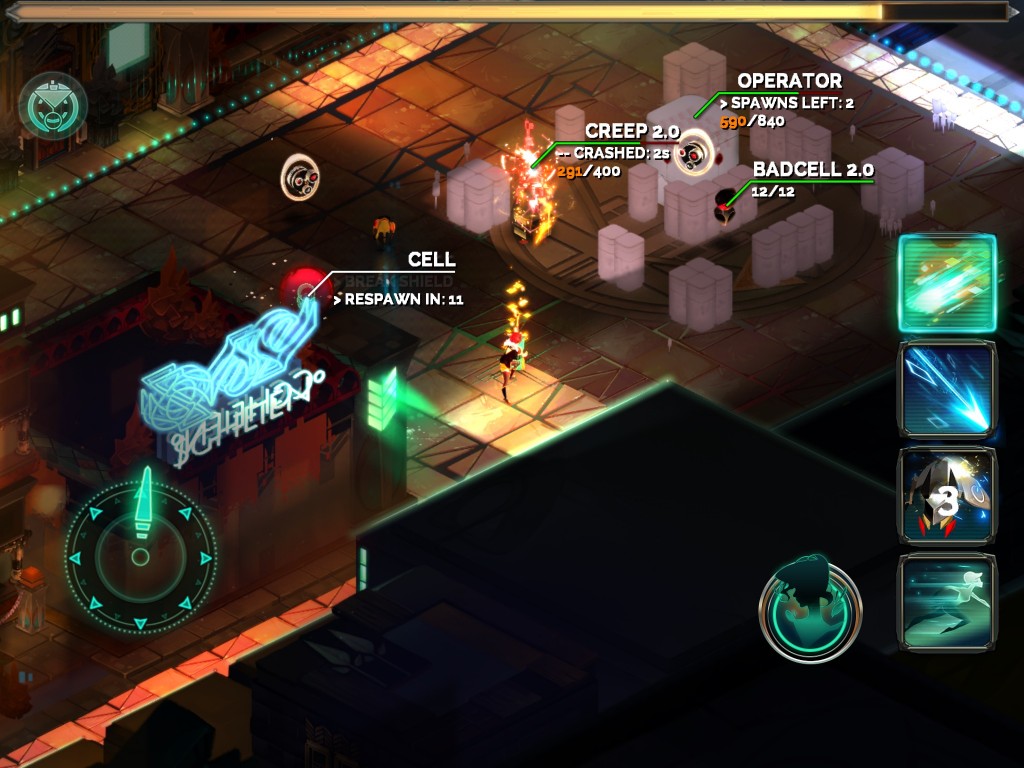 The story goes by really fast, which makes it a little sad when it’s over, but that’s just a testament to how fantastic the game really is. Throughout the entire campaign there’s never really a dull moment, you’re either engaging in battle with unique new enemies, or exploring and learning more about the story behind everything that’s going on. Its one thing to have a game with an 18 hour story mode, but 75% of that is re-hashed combat — that’s not the case here. Even though you’ve only got a few hours of content, it’s way better because of how extremely engaging it is.

As mentioned in the initial summary, this is a $10 premium game. There are no IAPs in the game, nothing cosmetic, and nothing to speed up your progress. That’s always a great feature, but then it comes down to whether or not the juice is worth the squeeze. In the case of Transistor, you definitely get your money’s worth. If you go through the story in a linear path, without taking any time to stop and smell the roses, you’ll still get around six solid hours of Gameplay. Now, that makes the price-tag sound a little steep, but there is some additional content if you choose to explore, and the overall quality of the game also makes the price more justified.

Anyone who played Bastion and enjoyed it will likely have a great time with Transistor as well. The story-telling is fantastic, it’s visually phenomenal, and the length is solid. Innovative combat is another great part of this game, and although I wasn’t completely enthralled by the gameplay, it was an interesting concept. Despite the price being on the upper end of what you normally see on the App Store, Transistor is worth the money.