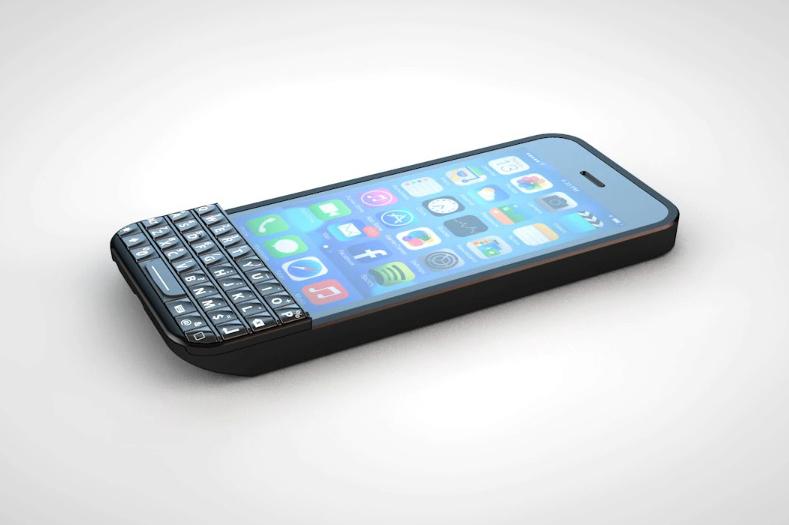 Remember back when having a full QWERTY keyboard on your phone was considered to be top of the line, or even the brief period of time when it was the standard in the beginning age of the smartphone? Personally I still miss those days, I used to be able to dial in text at rapid speeds without even glancing at my phone. It wasn’t until the original iPhone was released that touch screen keyboards started to become the norm in smartphones, and well touch screen keyboards have come a long way, there’s still plenty of people out there who long for full QWERTY keyboard smartphone. BlackBerry has stood by their keyboard and is currently the only mainstream smartphone provider to consistently offer one, the problem is that BlackBerry’s OS is becoming somewhat of a dying breed. Now, thanks to Ryan Seacrest and the people at Typo, you can purchase a iPhone case that delivers a full QWERTY keyboard to your iPhone.

You may remember a while back when we posted a article about this product, in fact it was questionable if the Typo Keyboard would even see the light of day. Because the keyboard takes such a strong resemblance to the keyboard built in to BlackBerry phones, there were lawsuits flying at Typo and Ryan Seacrest for intentionally ripping off their keyboard. While the lawsuit continues and BlackBerry pushes forward in a San Diego federal court to stop the Typo Keyboard from shipping out, Typo is remaining strong and continuing production. The court date has been set for March 5th, which currently Typo is displaying a “Sold Out” until, you guessed it, mid-march. So if you weren’t on board with the pre-orders you could be out of luck. Because these Typo Keyboards are already in the hands of those who pre-ordered the product and will most likely be able to be found on outside networks, we thought it still deserves a solid review. If you’d like to check out the full story on the lawsuit between BlackBerry and Typo, you can check it out here.

There’s a fair reason that BlackBerry is pursuing legal actions against the keyboard case people are calling “The case that turns your iPhone into a BlackBerry”. There’s absolutely no mistaking the resemblance here, the keys hold a specific curved texture for the right and left sided keys, though the feel of the keyboard differs quite a bit from that of a BlackBerry. The keys have a much lighter and cheaper plastic feeling to them, making it lack the responsive nature of traditional keyboards. A few iOS specific keys are added to the bottom like one to access your mail, as well as a much smaller home key. Unfortunately the keyboard blocks enough of the bottom of the screen to prevent you from swiping up to gain access to the Control Center, it also covers the Touch ID sensor/Home button, which basically negates that feature from the iPhone 5S and forces you to use the smaller home key on the keyboard. One of the better benefits is having more viewing space on your screen, no longer requiring the on-screen keyboard is a welcomed addition, especially with the few on-screen keyboard bugs that iOS 7 still has.

As I mentioned above, it can take some time to adjust to a smaller smartphone keyboard for the first time, though generally after sending a few texts, updating social media statuses, or reviewing apps on the App Store, you’ll be ingraining that muscle memory to your fingers fairly quick. Anyone who has used a smartphone keyboard, especially a BlackBerry keyboard will feel right at home. As far as words per minute, it largely varies on the user, for some users they will find they’ll have a much faster word count on a touch screen keyboard vs the Typo keyboard and vise versa. Typo Keyboard feels like it works better with either smaller fingers or at least a more graceful touch. It does offer a auto-correction often times fixes punctuation like turning “its” into “it’s” and for other words uses the auto-suggest, allowing you to tap on screen to select the word you’re trying to spell.

One thing that you’ll notice if you don’t pay attention to what you’re typing on screen, or don’t proof read your text, is that you’ll end up with more mis-spelled words rather than the completely wrong word. Considering the mass amount of auto-correct meme’s out on the internet, this probably isn’t a bad thing. Much like using special characters on a desktop keyboard, Typo has you using key combinations for any character outside the alphabet. An example would be pressing Alt+N to create a comma.

Another major aspect to consider is outside peripheral ports, as well as battery life. You’ll definitely notice a change in how fast your battery dies using the Typo Keyboard, and well it’s not anything drastically significant, it’s enough to notice. Connecting your charging unit as well as headphones feels more awkward and clumsy than without Typo. There at least things to consider when deciding if having a full blown QWERTY keyboard on your iPhone is worth it or not.

The Typo Keyboard is without a doubt a great idea and one that a large demographic of users will be interested in, unfortunately the execution of that idea isn’t quite as great as the idea in itself. The unmistakable resemblance to the BlackBerry keyboard may have felt like a good idea on paper, but because of the fire-storm they’ve created with a struggling to stay alive competitor, they’re suffering major setbacks. Overall Typo Keyboard does deliver what it promises with a full keyboard for the iPhone, it’s all the outside factors, like peripherals and blocking certain design features of the iPhone, is what make us question if it’s worth adding to your iPhone.

If one really good thing can come of this product, it would be to see future keyboards released for the iPhone. Whether it be a improved model by Typo, or another company that ventures into the arena of smartphone keyboards, it will be great to see a perfected version of this product. For now, Typo Keyboard is a product best left to veterans of smartphone keyboards who are desperate to regain this feature, without having to go to a dying OS.

You can purchase the Typo Keyboard through Typo’s website for $99 at TypoKeyBoards.com

What is your take on adding a full keyboard to your touch screen smartphone? Should QWERTY keyboards remain a relic for phones or are they destine for a comback? Let us know if the comment sections below. If you already purchased the Typo Keyboard we’d love to hear what you think of it as well. You can also like our Facebook page, follow us on Twitter, and add us to your circles in Google+ to keep yourself up to date on all things mobile.