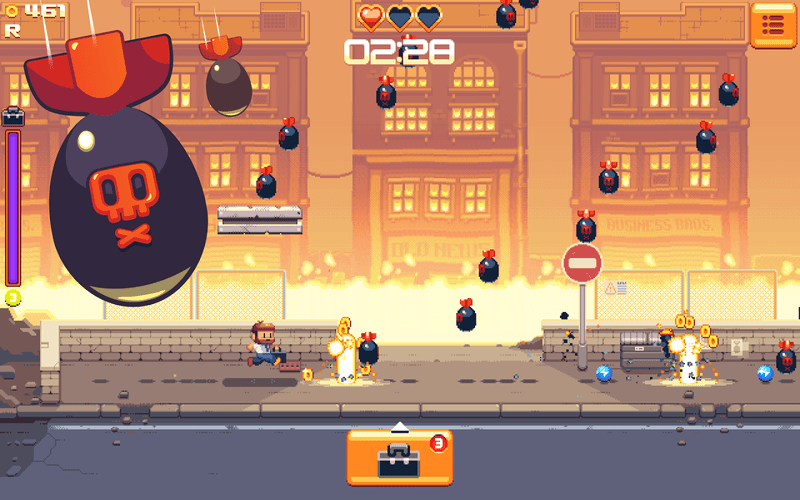 Ultimate Briefcase is a new game from Nitrone, a very much honored publisher we know for Gunbrick, Silly Sausage in Meat Land, Magic Touch: Wizards and a ton of browser games they port to mobile every now and then. The latest release is a simple but fun arcade “dodge the bombs” action wrapped in pretty pixel art. It’s the retro pixel art that makes it worth a download alone. There is also some back story to Ultimate Briefcase, a ton of unlockables and consumable IAPs, ads and very catchy soundtrack. Yet, the developer has made a daring move to lock that fun part behind a wall of repetitive, and quite uninspiring initial stage.

You control a pixel guy running back and forth with a briefcase, dodging bombs falling from the sky. Supposedly, some evil alien force is making it rain bombs and big bombs, and pumpkins and also some power-ups once in a while. The density is quite heavy, so you won’t be surviving for too long during your initial gameplay. As you play, you earn energy, of which you have a meter. When it fills up, you can use your briefcase as a shield against the bombs for some 7 seconds. It’s very easy to overlook when its action ends and die a stupid death. 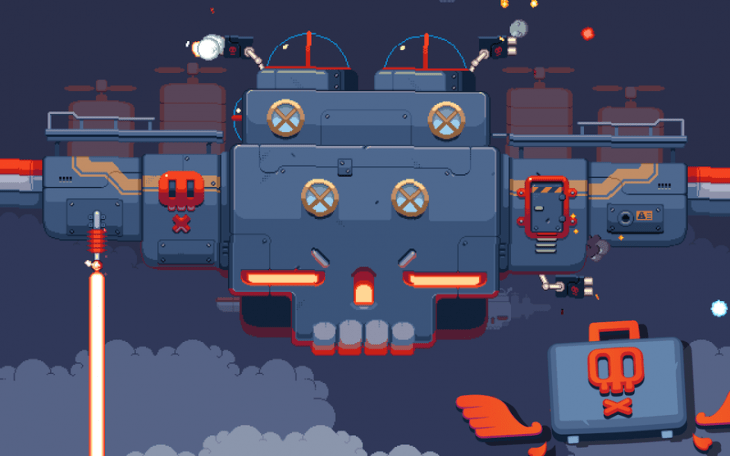 You also collect coins that drop from some coins. These will let you unlock new characters, power-ups for them and even new parts of the city. That said, the unlockables require a lot of grinding. A new character costs 100 coins provided you earn a couple coins to a dozen coins per round. However, the UI is a trickster! The “replay” and the “pay 25 coins to revive the hero” buttons are placed so that you initially aim at revive when you, in fact, mean to press the replay. Thus, I repeatedly lose my coins to revival when I don’t mean to. A small trick that makes the grinding all the more annoying.

Hence, before you get to power-ups, new characters, more locations and collectible security camera footage that explains who is dropping the bombs, or what is in the briefcase, you need to get the gist of the gameplay. Otherwise, the Ultimate Briefcase loses its appeal and replay value before it gets a little easier and, ultimately, more enjoyable to play. 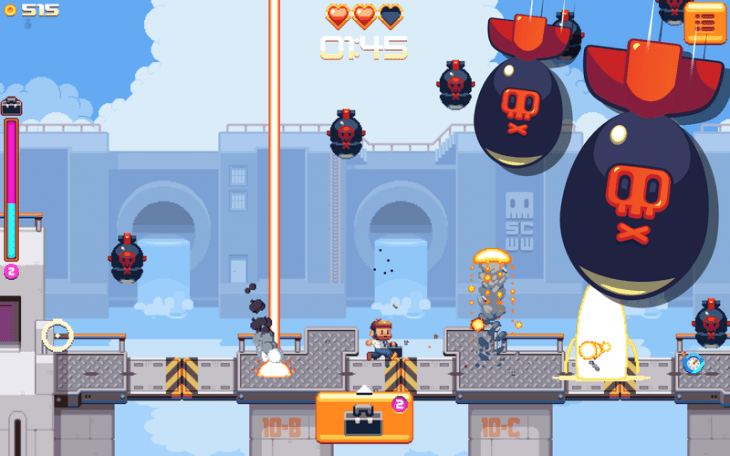 Spice it up with $4 IAP that removes ads, and I am wondering if the game seems “a little” overpriced? Especially since that particular IAP does not affect the gameplay at all. You can cash out $5 for 5000 coins and unlock the fun stuff, but I find it hard to recommend considering the price per replay value ratio. That is, unless you are a hardcore Nitrome fan. Considering the ads, which are optional, and the prices of the available IAPs, the freemium model here is mildly befuddling, if not annoying.

I can’t say Ultimate Briefcase is mediocre, but it won’t be a blast, so don’t expect too much of it. It certainly needs to make the initial gameplay a little more accessible and catchy because it may lose a bunch of gamers to the repetitive grindfest and poorly placed replay/revive buttons.

Visually, it’s very good and eye-pleasing, that is certain. However, by the end of the day you will probably get the most of it and move on to something else. The eye candy does not make up for the boredom that slowly creeps in as you play. It’s a nice time killer for a day.