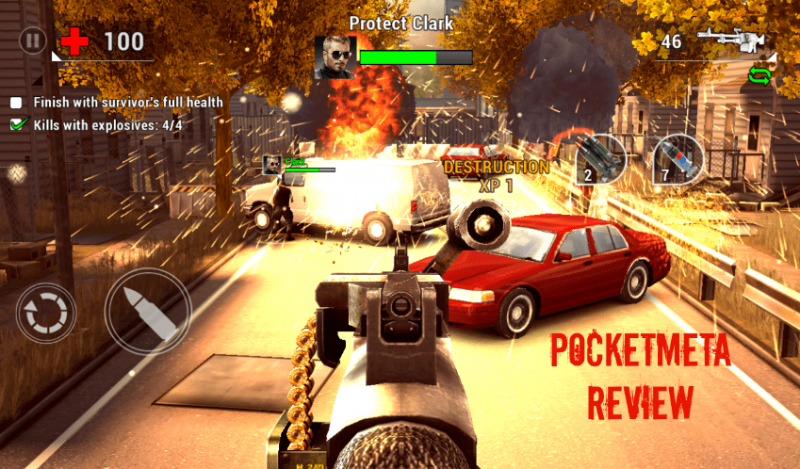 I have come to realize a disturbing reality – the zombie shooters are here to stay. For some people, it seems, the novelty of shooting the undead never wears off, so I guess I’ll just live with it and accept it for what it is – an entire sub-genre of FPS or third-person shooters. In fact, zombies have occupied so much entertainment estate I’d dare say they deserve a sub-culture badge.

Madfinger is the well-known Czech-based developer behind Shadowgun and Dead Trigger series. Unkilled is its next first-person shooter that landed on Google Play and iTunes app store a few weeks back, and I played it for about a week to make up an informed opinion about the pros and cons, so here is my review. 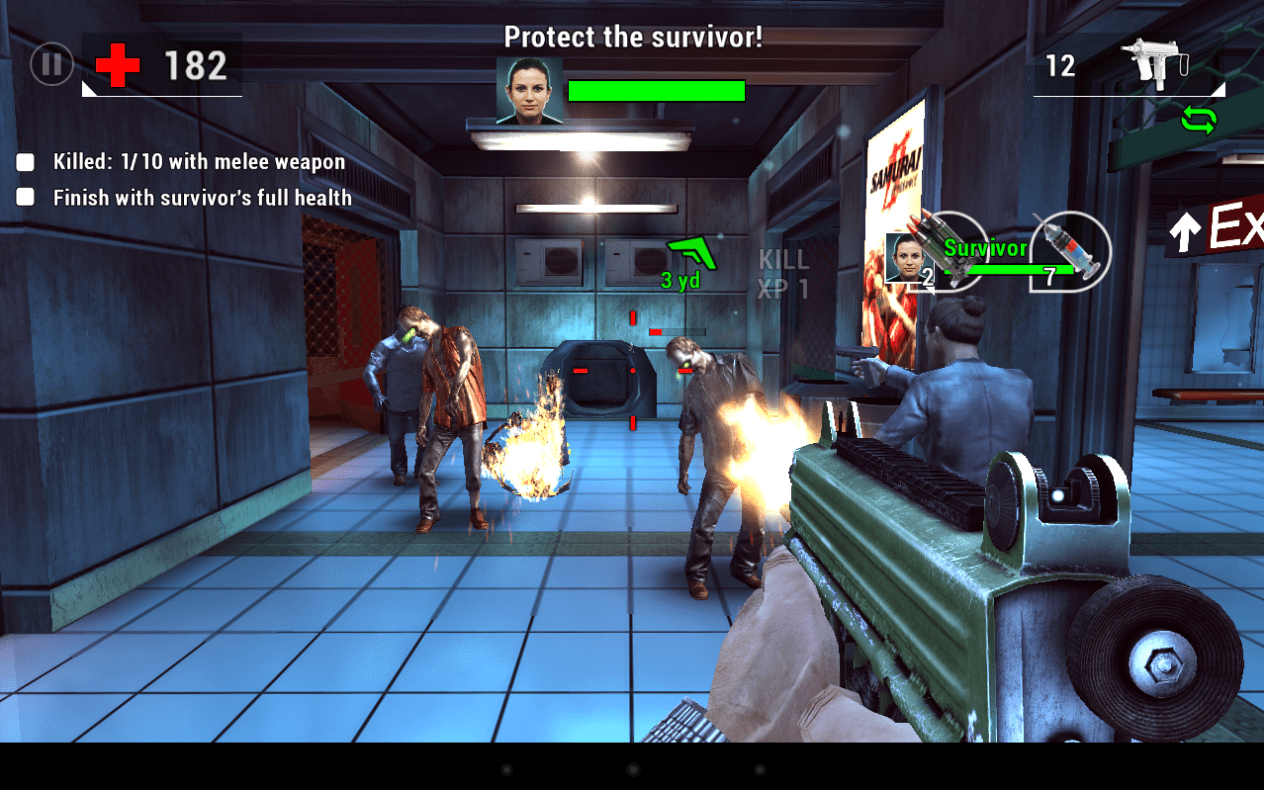 There seems to be an almost unanimous opinion among the gamers Unkilled should have been named Dead Trigger 3. That way, Dead Trigger 3: Unkilled would have been a nice title, but Unkilled by itself is somewhat pretentious, overused and misleading. Undead, unkilled, or undied, the new game is a younger sibling of the DT. Indeed, the similarities are abound and depending on your expectations it is either a good or a bad thing. If you expect something new, something groundbreaking and benchmark setting, something utterly new and fresh – nah. Unkilled is just that – a great-looking, bite-sized FPS with nice controls, fun gameplay, but rather typical for its genre. Moreover, there are some things that might seriously hinder your experience, but let us take its virtues and vice one by one.

It’s classic – choose your weapons, enter a mission, kill the zombies, save a survivor, or a soldier, or a friend, or hack some device, whatever. Get your reward, upgrade your weapons, go on a raid, repeat the above. 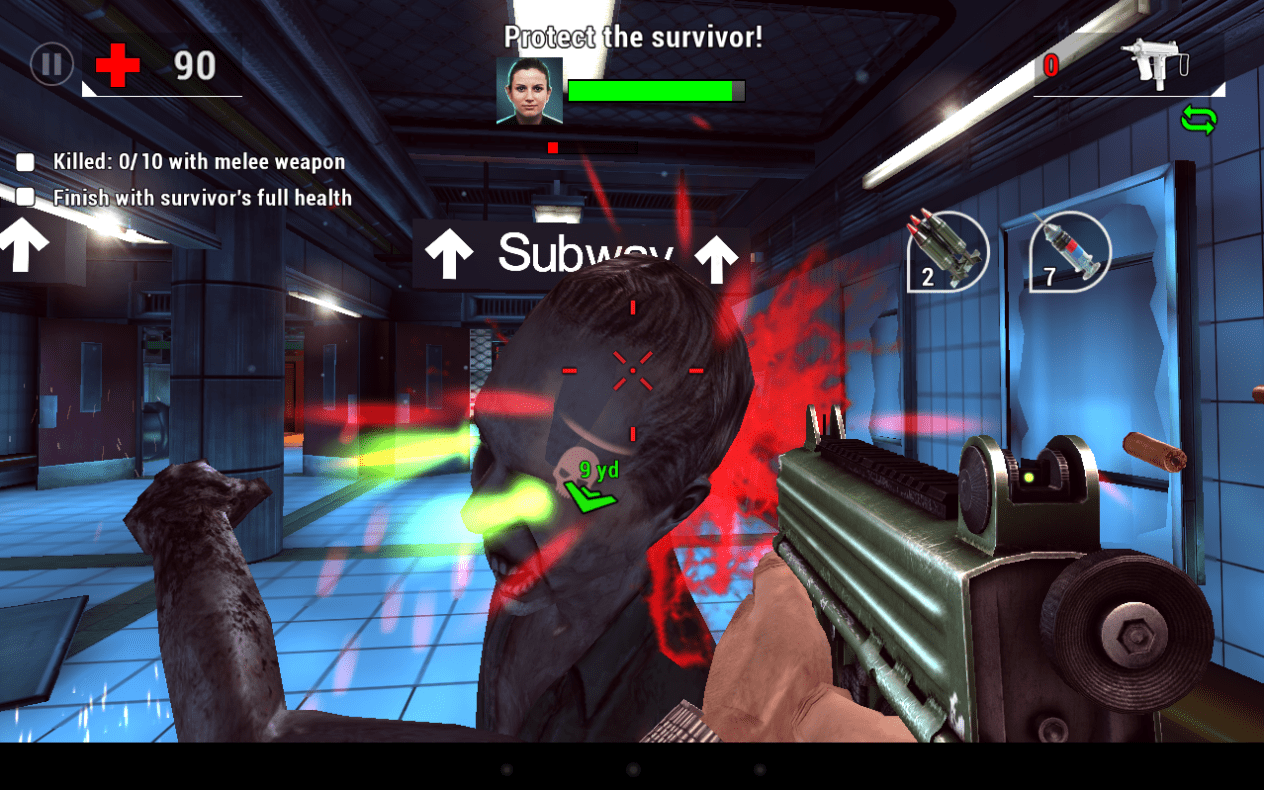 The gameplay is fun in its entirety, and Unkilled gets many things right with its control system. First of all, it features external controls support, so if you have some – use it, especially the Tegra crowd. Next up in line is the touch controls that work surprisingly flawless. You can calibrate the sensitivity.

On your left, there is the movement joystick. On your right, the aiming. It feels like second skin to move, turn your head around and aim – all simultaneously. The fire feature is set to autofire by default, and it feels right. This way, the screen does not get cluttered with the abundance of silly buttons my clumsy fingers tap when needed and not. Also, it is pretty comfy to have your weapon fire automatically when the zombies are in range. I, for one, never have enough time to jump between moving, aiming and firing in other games when it’s three separate buttons, So, I absolutely love the controls in Unkilled. The system makes the game accessible for the newbies and those who never get to become hardcore zombie slayers, but still don’t mind indulging in a thoughtless fun like this. 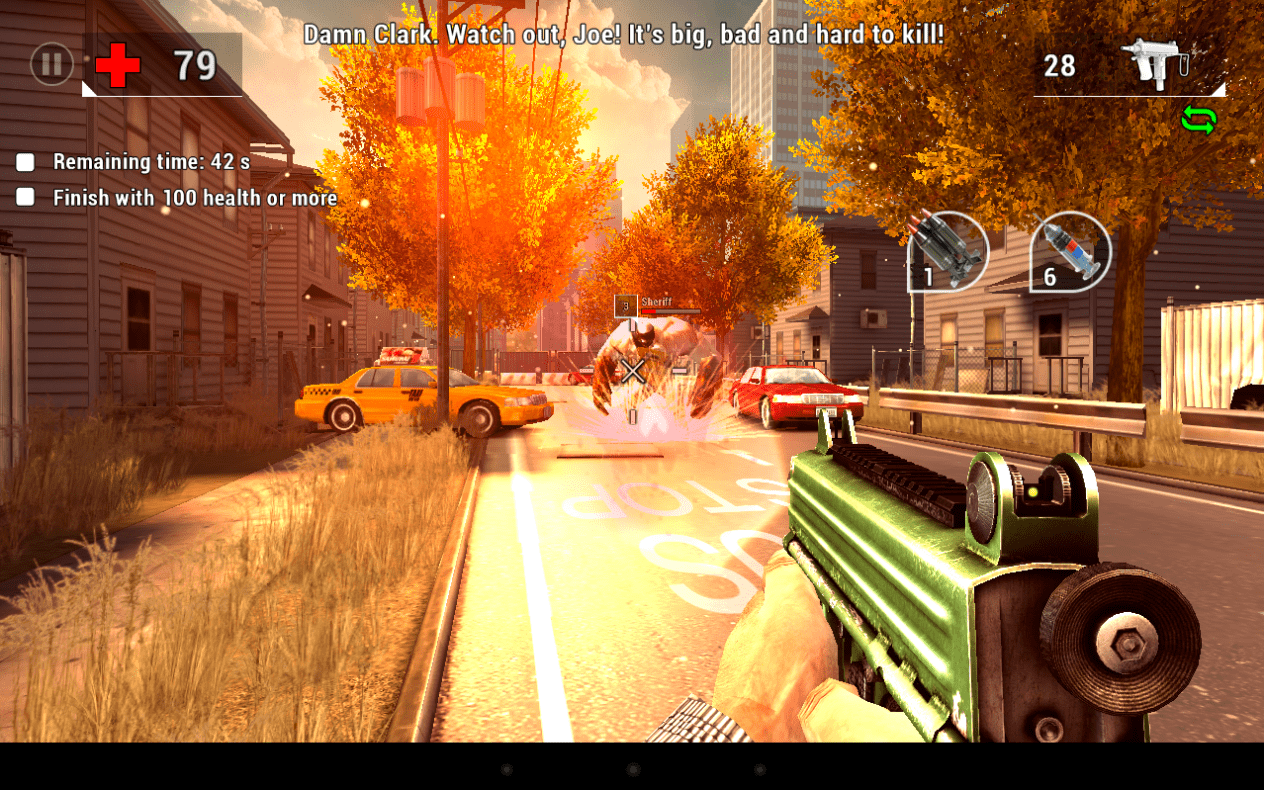 Missions, story and such

The term bite-sized is perfect for Unkilled’s take on its missions. There are over 300 of them, divided by chapters of sorts. They are quite short. All of them come with a set of objectives that, when completed, grant you a star when the mission ends. Ideally, you get the three stars per mission, and as far as I could see, every mission grants you a star for completing it in under X time, which is usually measured in 1 minute and X seconds. So, there you go – one to 3 minute missions wherever you go.

The first chapter is introductory and gives you the heads up about the ammo management and controls, but later on you unlock raids, which are special side-missions that supposedly grant you more XP and more money for completing them. They also seem a tad harder than the story missions. 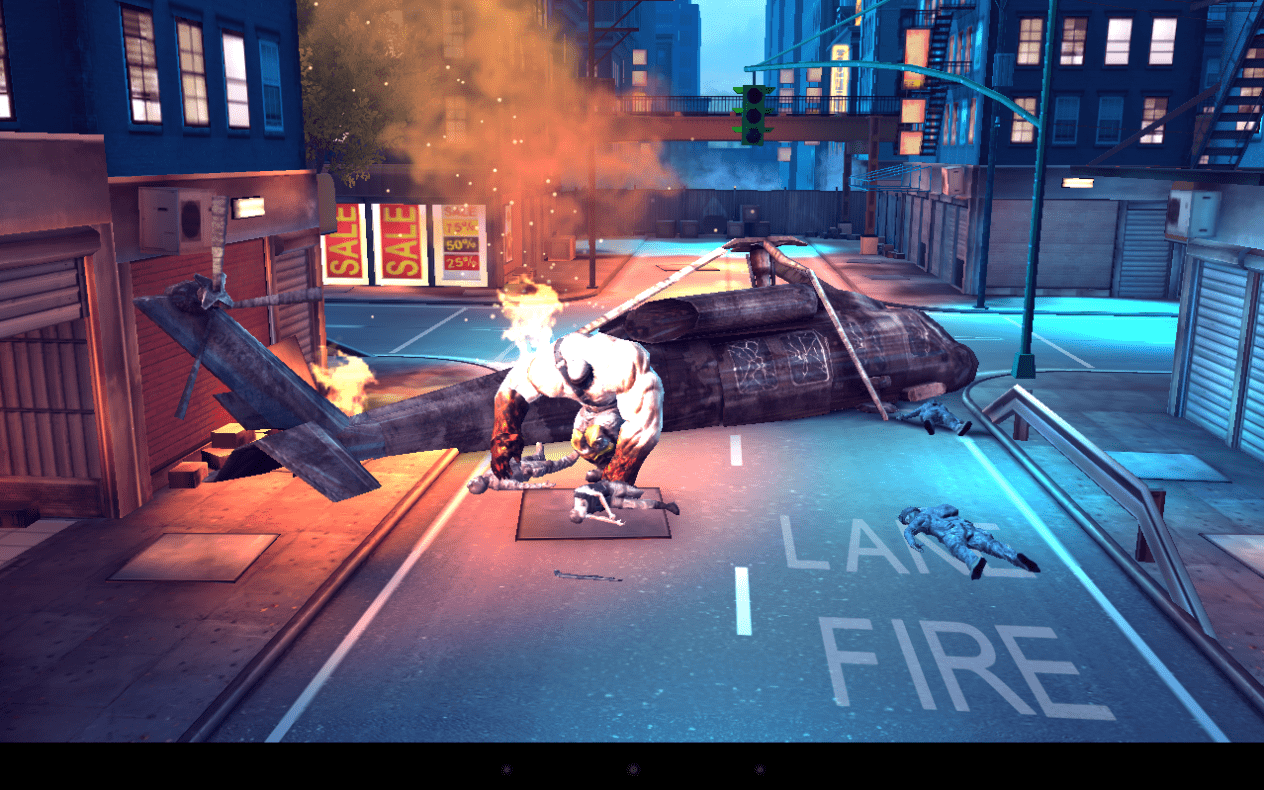 There is a story in Unkilled, and it’s nicely written and evolves the way to keep you interested. My heart sunk when I saw that big fat boss drag my buddy into the subway, so I felt motivated to keep playing to find him, and thankfully the game does not keep you in the fog for too long.

Sometimes you’d encounter new characters, other times you’d get a news broadcast about some Korean general invading the U.S. Oh, and it’s zombocalypse in N.Y., with the government still relatively functional. There are even TV news broadcasts.

What did not inspire me is the lack of voiceover, or any cutscenes except for the ending scenes in some of the missions, but the text bubbles aren’t too many. At the same time, you need to read through if you wish to keep up with the story.

Unkilled is spectacular, I have to give the developers the credit they deserve. Even though the rest of the game feels like a regurgitation of the Dead Trigger success, the looks are dazzling. Sometimes, I wished there was more time in between the zombie waves just to look around and take pictures of the pretty neighborhoods, the sun and the autumn leaves, the shades, particles, textures and colors. Unkilled looks like it’s aiming at the maximum realism, and even though this is not my favorite art style in mobile gaming, this game looks rad. I would not say it’s the best-looking game on mobile ever, but its design creators deserve all the praise there is.

There is also an option to adjust the visual quality manually if you experience frame rate drop issues when on high quality.

Now that we are done with the good things, it is time to whine about the rest. And whine I will. When was the last time you uninstalled a game you really enjoyed playing (and wanted to keep playing) just because it cornered you with its IAP-based model? Well, Unkilled might be the next in line.

Everything in this game is expensive and has timers, has stamina, has upgrade walls that won’t let you play until you upgrade your weapon, or buy a higher-tier weapon, or I don’t know – cash out $7 to $39 for a bundle of weapons.

As you might imagine, the rewards for completing missions are meager when compared with the prices of the weapons and power-ups. 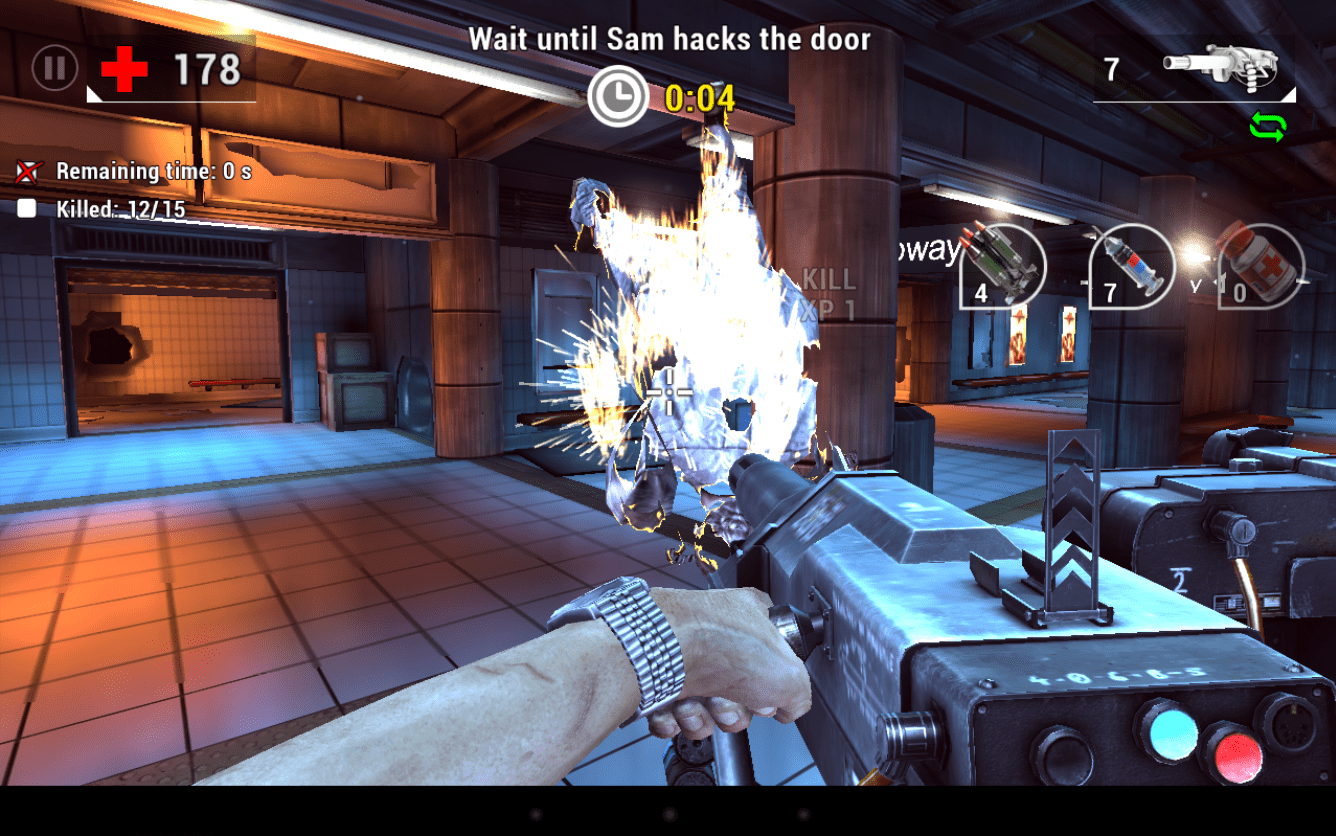 The game has two in-game currencies – money and gold. Thank you Madfinger, at least it’s not four or five currencies. Two currencies makes your life a little simpler. You need cash to upgrade or buy weapons and you need gold to speed up upgrades. You also need gold to buy power-ups, and these are really expensive. You get some 2 coins for completing a mission while a single multirocket costs 7 coins! A bundle of 4 multirockets costs 28 coins – imagine the grinding you need to withstand just to buy the rockets. In my experience, I need them regularly. Maybe not in every mission, but sometimes I find myself pretty cornered, so the auto-aiming rockets annihilating a bunch of zombies are a necessity, not a luxury. 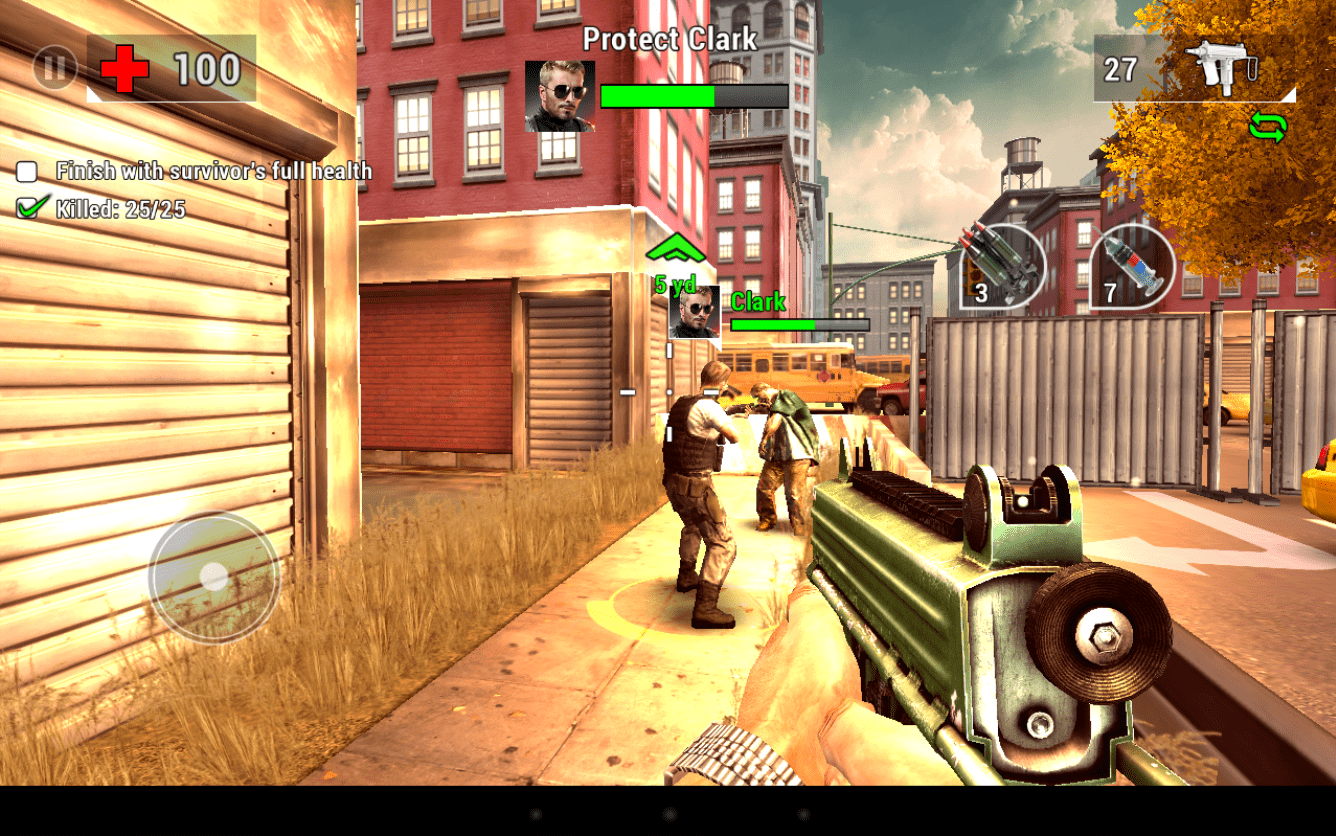 The perks that make surviving in the Unkilled come in a variety. The adrenaline shots slow down the time, and give you a boost in aiming, so you score more head shots when under the influence. They also make the environment go grey and the zombies go red, so aiming is easier, indeed.

The med kits give you a boost of health when you’re injured, but the rockets are a must when you confront the bosses. 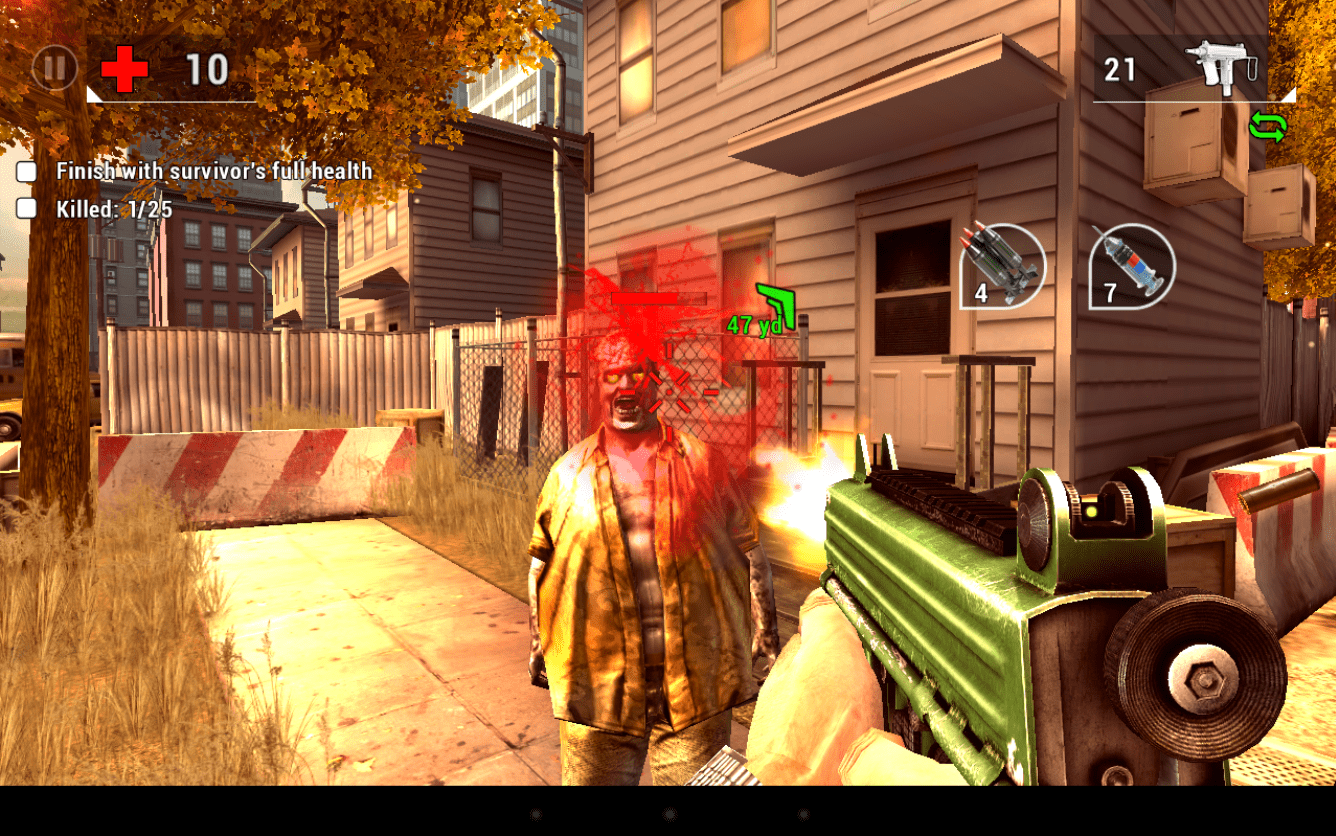 Now, comes the B part… The timers. Your play time is limited by the energy, and you have 6-7 energy jolts when you start. One regenerates over the course of 10 minutes, if I am not mistaken. Some missions require 2 jolts to enter. If you die, the game offers you a second chance, so that takes another jolt from your stock. As a result, you run out of energy before you know it.

This would not have been such a big issue if the game were playable offline. It beats me why a game so perfectly fit for short snackable sessions on the go while commuting needs to be online at all times. It does not even have the multiplayer, so what is the catch?

In the end, you only have this much time to play mobile games, and on the go, or during a coffee break, or waiting in line or commuting is that time for many people. Unkilled does not want to take advantage of that. Yet, when it comes to the evening on the sofa game time, Unkilled still does not want you to enjoy it because it gives you only a little piece of fun. It’s somewhat annoying and leaves a bad aftertaste, so I think – I’ll give you one more chance, but will uninstall if I get upset again.

The argument that everybody gets to enjoy a free game and no one is forced to buy anything via IAPs is valid, but I always want to see an option that lets the customers buy a premium version of the game that is not hindered by waiting timers and stamina. 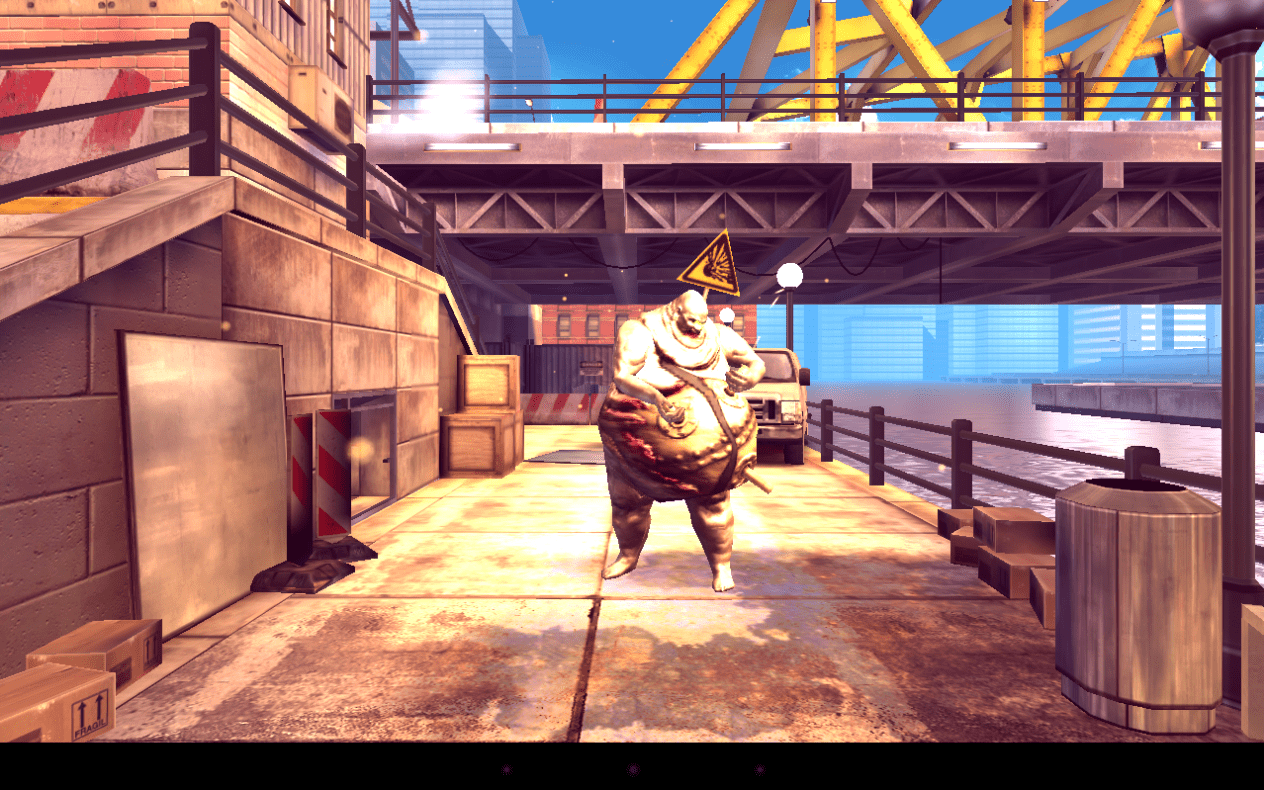 Oh, one more thing – the rewards. Every now and then I got the reward cards with special weapons and power-ups. I was somewhat surprised when I could not find a way to use them during the missions. I thought it was a glitch, but then someone savvy explained to me the time next to each special weapon you get as a perk is not the time you can use it in a mission, but the time during which the perk is available. So, I get some super rifle, and it’s valid for three minutes. As I head to the next mission, I realize I need to upgrade, or buy me a med kit, so a few transactions, plus the upgrade timer totally cover the three minute validity of the perk I was going to use. Add a few video ads I watched to get 2 coins of gold and hasta la vista, baby. The rifle is gone. In fact, I miss 90% of these time-based perks just because I am used to focusing on micromanagement in between the missions. You know, because I dislike getting killed.

Wrapping up the IAP overview, I have come to think Unkilled has a poorly balanced IAP system that seriously hinders the gameplay experience. The absence of a single IAP that would remove the energy jolts and grant a premium weapon means the paying customers are doomed to pay more whenever they face a paywall. Not my cup of tea. 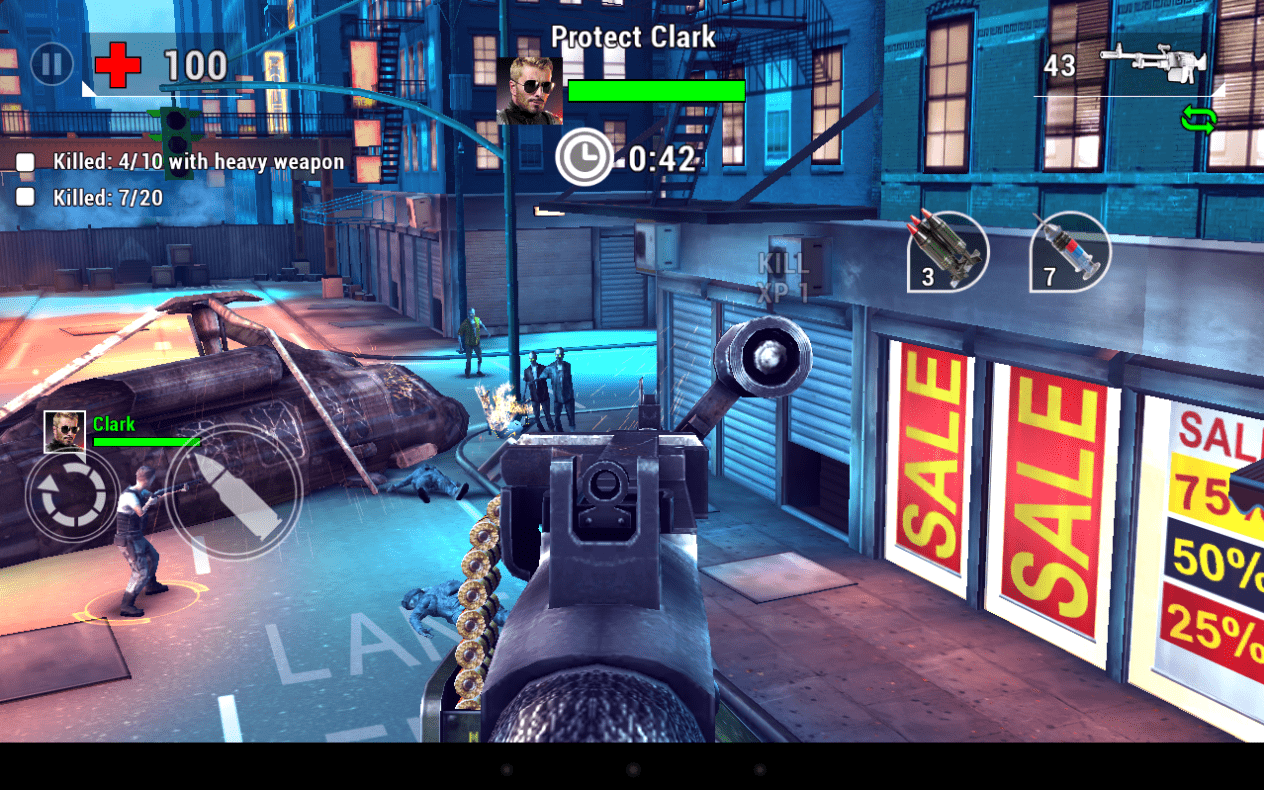 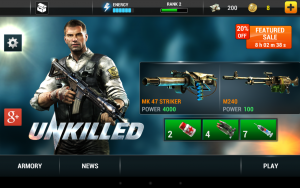 Unkilled is a spectacular FPS with smooth controls, nicely written, coherent story, good-looking characters and short, bite-sized missions perfect for gaming on the go. Yet, the requirement to play online when there is no multiplayer nulls and voids the “on the go” possibility for many players. Moreover, the Dead Trigger fandom seems to be not so happy with the game’s similarities to the franchise, considering how Unkilled is positioned as a standalone title. Alas, it’s the new skin, but old bones, so that trick did not work. Besides, it does not bring anything new to the table. The energy system, costly upgrades and power-ups could have been tolerable under the short missions and hence short gaming sessions on the go if it were possible to play offline, but no go. So, the said energy system and IAPs become a paywall for those of you who have the time for the longer play sessions. To pay, or not to pay is up to you. I’ve made up my mind – Unkilled is a beautiful fun, and even lots of fun, but I won’t be loving it for too long.