Last year we reviewed Le Havre the Inland Port by Uwe Rosenberg, a mobile adaptation of an award-winning board game. Patchwork comes from the same author and same developers, and it just landed on three mobile platforms – Android, iOS, and Windows Phone 10. With a price tag of $3 and purely cosmetic IAPs each worth $0.99, Patchwork is a noteworthy entrant in the niche of the mobile board games. If you are looking for a good game to play with your wife, girlfriend, friends, parents or children, to take to a road trip or play before you go to bed, Patchwork is sweet. 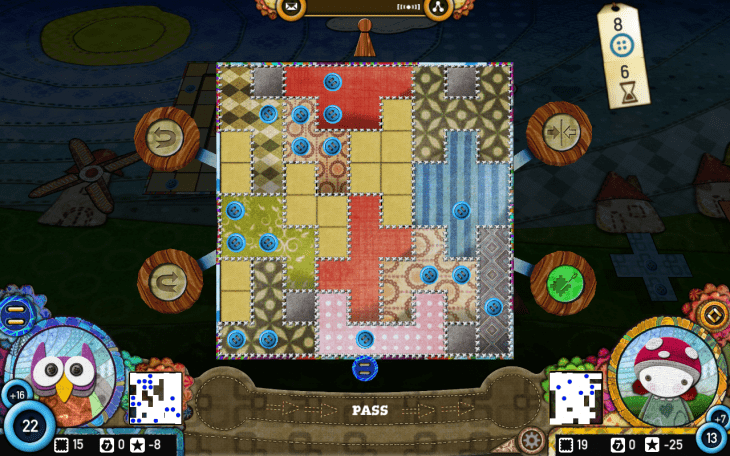 And by sweet I mean pure sugar, honey, saccharine, fructose, condensed milk and donuts wrapped in one. Or maple syrup and waffles, if you wish. Yes, as long as you’re talking about quilting you can imagine the kind of design to expect from Patchwork, where you have to stitch colorful pieces of cloth onto a base with the ultimate aim to create a quilt. If you are the Mortal Combat X kind of player, you might need a dose of salty tequila after a good round (or ten) of Patchwork with your girlfriend. If you don’t have a problem with pink, beige and yellow, and total cuteness, you are good to go.

In fact, the design is outstanding when you accept the cuteness. The tiles are highly detailed while the backgrounds come in a few versions, one Classic with less lady bugs and windmills, and the default one, which is the cute-cute version. 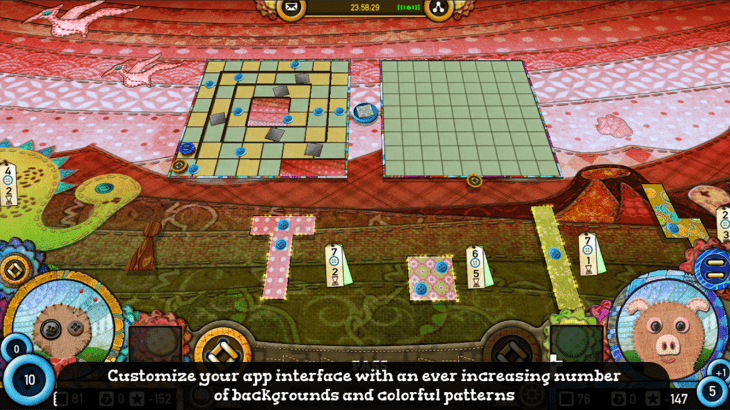 Since we’ve started with the looks, the music is also sweet and excessively catchy, so I found myself humming it as I went to bed. It’s not distracting, but if you get a honey overdose you might turn it off as well.

Now, let’s see the gameplay close-up. Right off the bat Patchwork takes you on a short tutorial. You play versus an opponent, which can be AI (easy, medium and hard), local pass-an-play, online versus your friends, and online versus random opponents.

You have a base for the blanket, which is a 9×9 grid. Your opponent has the same. At the bottom of the screen you see a selection of tetris-like pieces of colorful cloth. Depending on your funds, you may have from 0 to 3 available patches. Each patch costs buttons and takes you a few moves ahead on the board. Some patches have additional buttons on them.

The board has buttons and single patches on them. Once you cross a button, it deals you the amount of buttons you have on your quilt at the moment. If you cross a single patch, you can use it to cover the holes in your quilt. Each move costs you two buttons, and if you have holes in your quilt you have to pay the fine in points, too. The points are calculated based on your moves, and truth be told the points system is a bit less transparent than I like, especially at the end. Once both players reach the center of the board, it’s game over, and the winner is calculated based on the points. 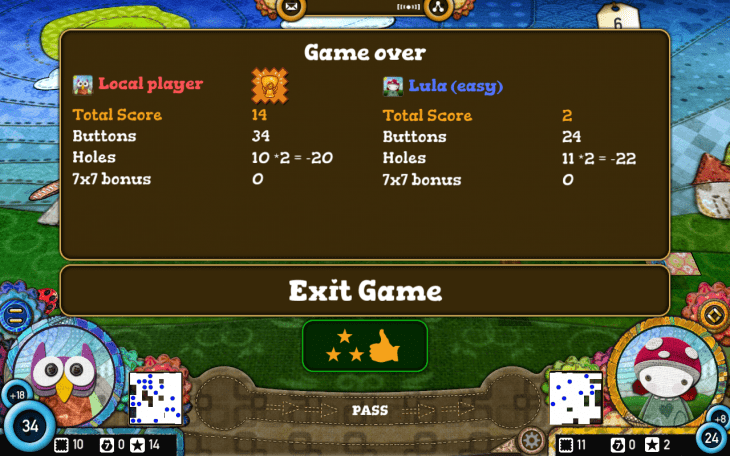 You can set the game speed to normal, medium and high, depending on how you like the stitching effects to play out.

As far as performance is concerned, I have not had any issues with the local player versus AI, except for the fact that I lost three times straight to the Easy AI. Doh…

The local pass-and-play is very fun, but this is where I noticed a few glitches. The first one is when you accidentally apply multitouch gestures while placing the patch on a blanket, it can get stuck in a weird 30 degrees position crossing through the blanket. This is fixed if you quit the game and start over. As far as I understand from the developer feedback on Google Play, Digidiced are already working on the update to fix that issue. The local PvP also seems to have an odd bug with the points count, where the end result seems to be correct but during the play the game only subtracts the points from the player one. This does not help much when you are trying to learn how the score system works. 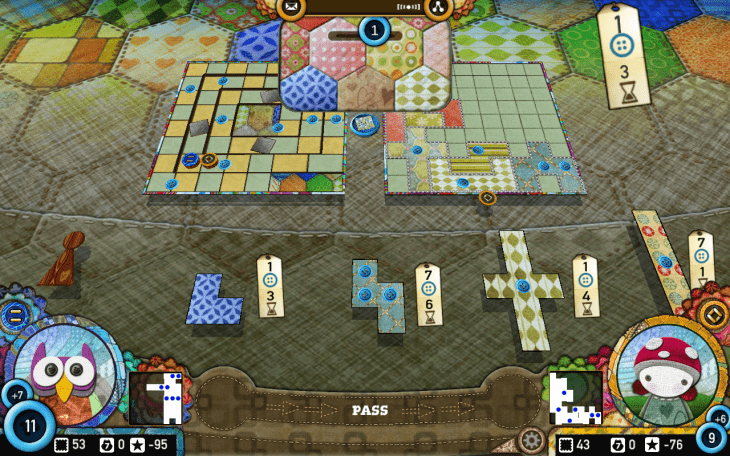 Additionally, I would like to be able to select avatars for local pass-an-play because two owls, with one named local and the other named guest can be very confusing at times, especially when you play several rounds in a go, and all the quilts begin looking like yours. The ability to name the local and the guest players would also be welcome. If this feature is available, I apologize beforehand, but I did not find it.

The online PvP can be ranked and unranked versus your friends. I don’t have friends who like quilting, and I play pass-an-play with my girlfriend, so I could only explore online ranked games, but failed to play any since only games dubbed “local” showed up on my queue (this could be due to the press release copy of the game not having cross-platform features, though). 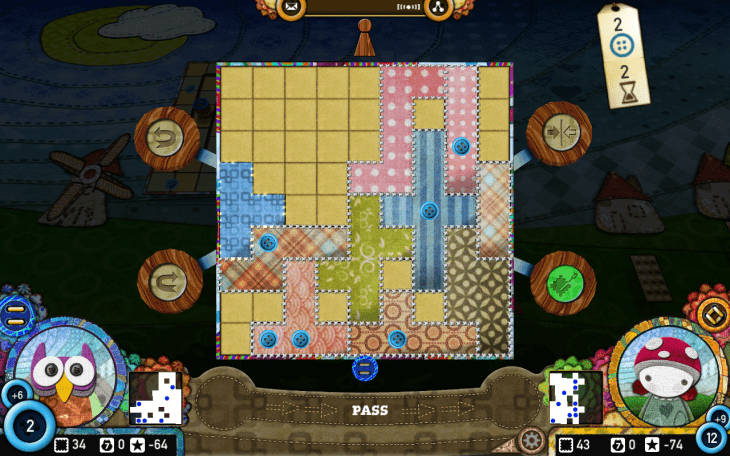 From the feedback on the markets I can tell the online PvP has some issues, but considering this is a fresh game, hot right out the oven, these rough edges will be ironed out soon. Digidiced have proved to be diligent and fast to respond to user feedback, so I am not worried here. 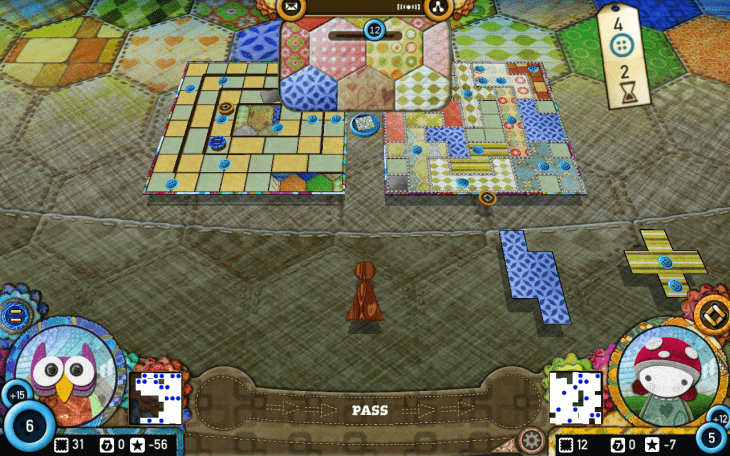 I am missing one crucial feature as of now – an undo button, or a way to try out each of the available patches before buying. I see itas accomplish-able in the short-term perspective. In a perfect case scenario, a free Zen mode where a single player can simply finish that quilt without leaving holes in it and share the creations with their friends.

The difficulty varies, and has more depth than you would initially anticipate. Think of it as a tetris with scores and strategy, and a rival. Every turn you face a choice – do you buy a low-cost patch, or pass and get more buttons for the next one? Do you buy a cumbersome and bulky patch that has more buttons on it, or do you leave them to your opponent? 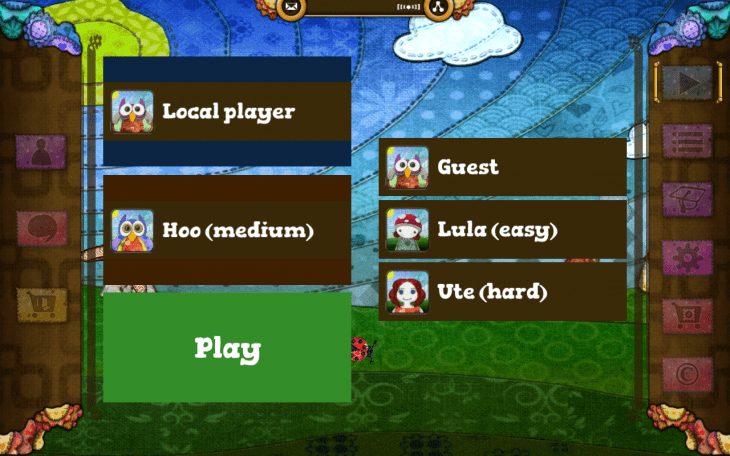 This all boils down to a solid, fairly deep and addicting board game with a mild learning curve and infinite replayability. It’s perfect for long sessions with families, parties, road trips, offline and online quick play, you name it. A few performance bugs aside, Patchwork is a must-have for the right player enjoying board games. It’s accessible, and with several difficulty modes anyone can play it. Finally, if you play with your friends and family, it’s the kind of game that brings you closer.

Disclaimer: the developer provided PocketMeta with a review copy of the game. The review was not sponsored in any way.