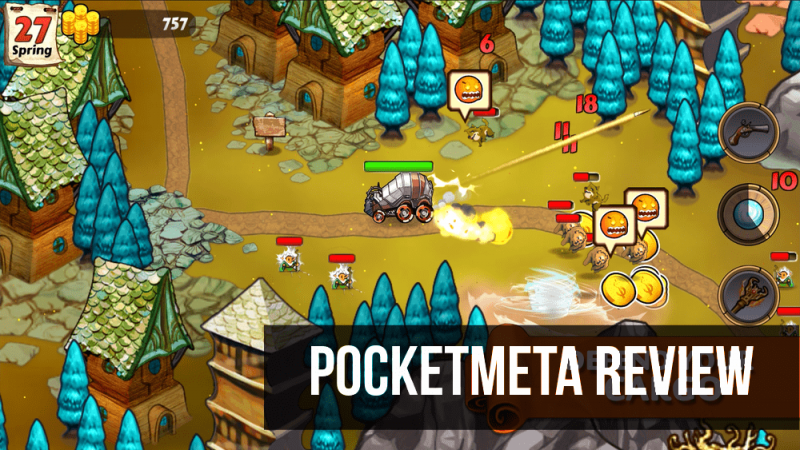 Wizards and Wagons is a highly-acclaimed economics sim game that landed on iOS late in 2015, and just recently on Android.

Wizards and Wagons is not your casual sim game, no. You need to have the special attitude to mobile gaming, and pick your games from the smart, slow-paced, thought-through and meticulous to appreciate this game. And be good at maths. And be observant, and have a good memory. 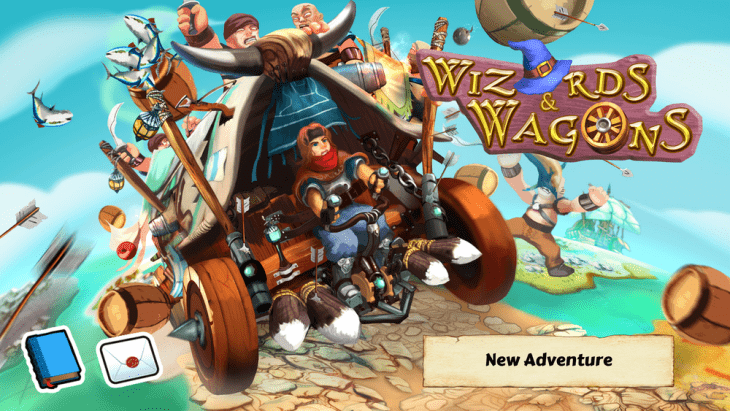 At the first glance, the game seems to be about riding a self-driving cart and delivering goods from town to town, earning cash. I was wrong. It’s so much more. Bear with me.

The plot is somewhat classic. You play as a hero who slayed some beast, but now that the peace has established you are broke. Because you’re no good at business. Heroes need crisis and war. That’s when they reveal their true potential and fulfill their destiny. In the time of peace, however, heroes are often broke losers. Die Hard John McClane’s own daughter called him a loser, right? So, you lose your house to some mean merchant, and now you need to earn a fortune to buy it back. How? A wizard grants you a self-driving cart (an allusion at Google?), and suggests you to become a truck driver delivering goods to and from different cities.

And so, without any commercial know-how, you buy a sack of apples and drive to the nearest town. Enter gameplay.

A cart has several slots, and their number depends on the type of your cart. There are slots for weapons, slots for potions and perks, and slots for goods. Since the number of slots is limited and there is nothing you can do about it, sometimes you would sacrifice self-defense and life to be able to carry more goods. Who said truck drivers have the easiest of jobs?

Now, the map has many cities, but they become available once you reach the nearby cities available to you. Each city has the information board that tells you some critically important information about the city – the goods that are in supply, in demand, and some other useful tips. Each city also has badges you can earn by completing quests. The market is an easy-to-read panel of your cart and the market’s goods. You can drag-and-drop the goods you have in your cart and drop the goods from the market, and the game calculates the finances. Tap Trade or Cancel and you’re done. You don’t have to make two-way trade, however. You can buy, or sell depending on your plans.

Blacksmith offers new carts, combat equipment and the repair for your damaged cart. Everything costs money, of course. 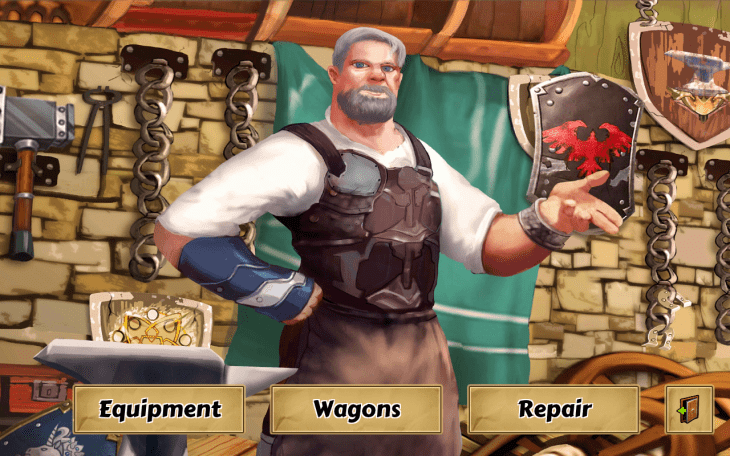 Did I say damaged cart? Well, yes. The thing is your cart is constantly under attack while you travel. Pirates, archers, crows, slime, some magic beasts, the more you advance the creepier they become. So, you must have a weapon, and you must restore your cart’s health whenever you can.

The combat is pretty simple – tap on the enemy fast. Really fast. If you die, the kind wizard will revive you and offer two locations to teleport you to. You only lose some small percentage of your funds when you die, so there is no permadeath. 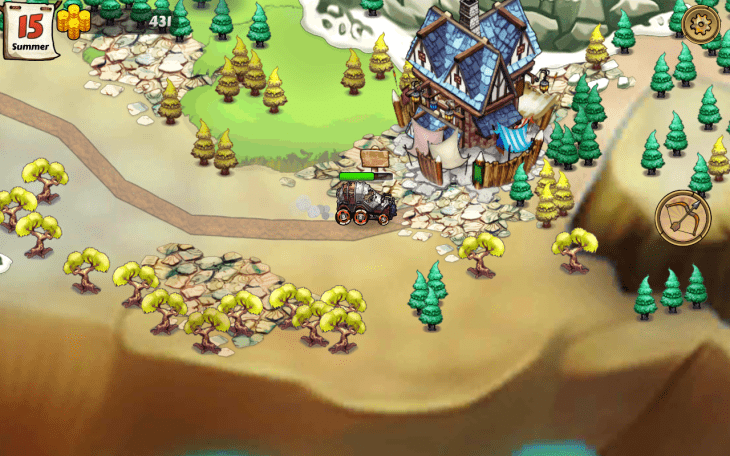 The Guild is where you find the quests. The difference between the townsfolk quests and the guild quests is the penalty you have to pay if you fail to complete the task within a given time. Now, be very careful with the Guild quests. Sometimes, the Guild provides the goods, but sometimes you have to buy them. The ridiculous part is the goods you need to buy in a specific quest you accept from a specific city guild may be absent from that city market. Sometimes, they would be available in the city markets you have not unlocked, yet. So, be very, oh but very careful with what you accept.

You can also borrow some money from the guild, and pay it back with the interest, of course. 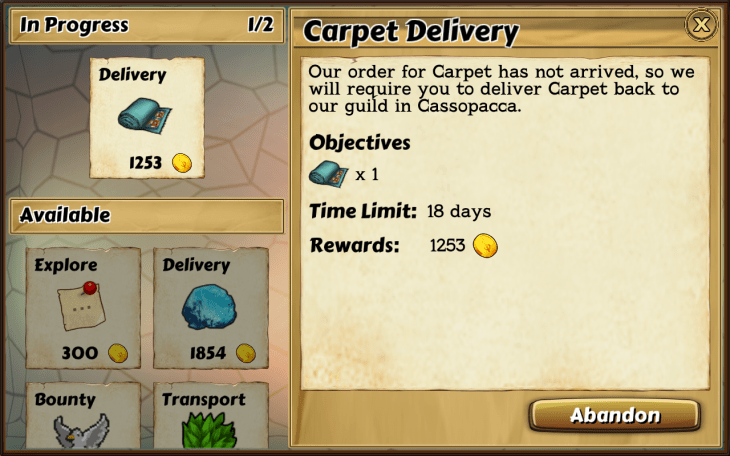 The map has a zoom-in and out option, so you can investigate the routes, the cities boards and perks. The difficulty here is how dispersed the goods in supply and demand are all across the map. You can’t just go back and forth between two cities, you need to move on. Of special difficulty to me personally was memorizing the names of the cities. When you accept a quest, or read the townsfolk rumors, you can draw some pretty valuable intel, provided you know the whereabouts very well. Otherwise, you can get a little disoriented from the amount of new data, names, prices.

Oh, prices. Do they change? Yes, you get to suffer the fluctuations. Some depend on the time of the year, others are affected by some local catastrophes and quite realistic events.

Calendar is there to put the game into more or less realistic time constraints. Each ride to the neighboring city takes X number of days, you can not stop mid-way, but you can camp in a city to skip a day and take advantage of a Black Friday bacchanalia. 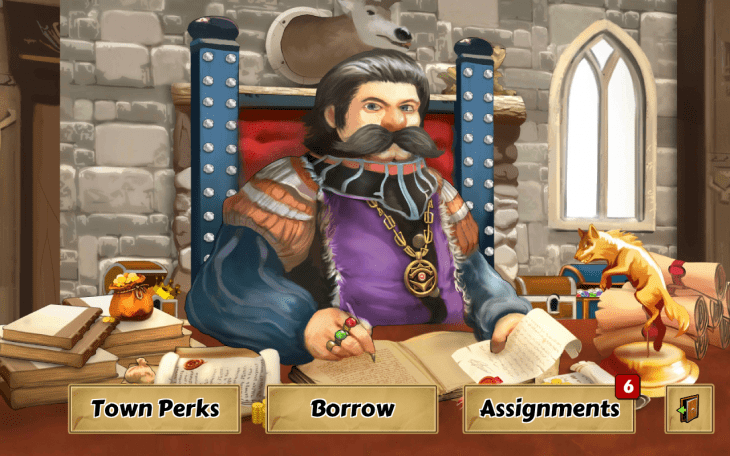 At the end of each year, the game generates a report for you, with some insight into how well or bad you are at the commerce. Additionally, the game has leaderboards and displays the top players with their stats.

If it all sounds like hard work… it is. The initial couple of hours were pretty hard for me. I made dumb choices taking up the quests I couldn’t complete. Sometimes I just did not understand you had to carry all three blocks of wood at a time to complete a quest – you can’t carry them one by one, or two and one in two trips. This cost me several useless back and forth trips to understand. So, yes, it has a relatively steep learning curve, but once it clicks you realize the depth of it and begin enjoying, and honing your skills. You are free to take whatever route, quest and deploy whatever strategy you like – sweet.

There is plenty of micromanagement, little details to keep in mind, maps and menus to double-check every now and then, calculating which route to take. Sometimes, the long and dangerous routes bring more profit. The further you advance, the more dangerous they get. 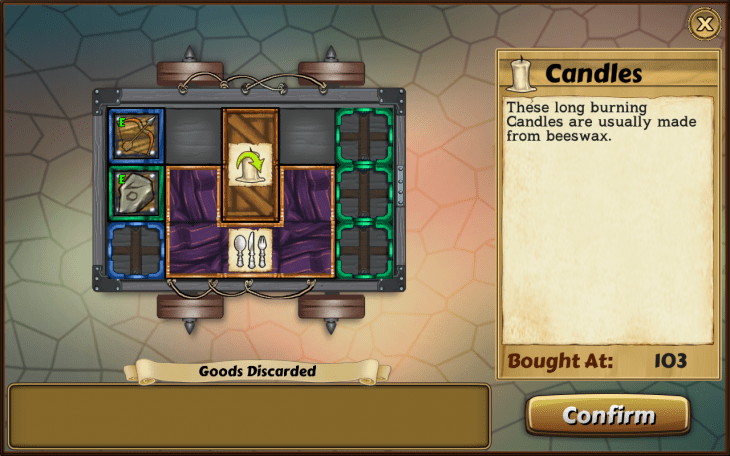 Wizards and Wagons has an accessible UI and quite easy to grasp menus – all you need is some trial and error to see how the quests and trading work. It’s a living network of trade and production, so there is a lot information to grasp and keep in mind. I found it challenging to come to terms with my whereabouts and quest status after a day’s worth pause in playing the game.

There are two save slots for different instances of the game, by the way.

Visually, Wizards and Wagons is a colorful, I dare say Zelda-like, feast for the eyes. Each city is a picture to behold, and the menus are detailed and beautifully rendered. I never felt bored looking at each and every scene of the game. The music is entertaining and quite catchy, in line with the gameplay. Sometimes, the writing will catch your eye with its wits and humor, so don’t miss out on the rumors. I have not experienced any performance issues with the game, and despite its difficulty it feels well-balanced. Since the game is premium, there are no ads or IAPs. The game itself is the economics challenge that might be hard for the mathematically impaired, but the overall experience is that of a solid, deep trade simulation with an immense durability.

So, is Wizards and Wagons for you? If you like trade sims with hefty micromanagement, a no-nonsense challenge and cute graphics, then yes, it is. I’m sure the fans of Le Havre The Inland Port will appreciate the wealth of the gameplay offered by Wizards and Wagons. The more casual players, however, might feel overwhelmed by its challenge.

Disclaimer: The developer was kind to provide PocketMeta with a review copy of the game. The developer did not sponsor the review in any way.