Stuck on Romans from Mars? Looking to maximize your potential at the tap and shoot castle defense game? Check out these handful of useful tips and tricks  you can utilize to help you make it through the final wave.

If you haven’t seen our review of the game, you can check it out here and find out what it’s all about if you haven’t played it yet.

Probably the most important thing you can do in Romans from Mars is to start firing arrows the moment you see an alien drop onto the playing field. This is really easy to do, because you’ll see a UFO beaming a green light, which indicates aliens are on the way. If you’re tier 3 arrows speed or higher, you can just start tapping in the area as soon as you seen the green light, that way your arrows are exploding on your enemies right away.

This goes hand in hand with the previous tip, but you’ll want to make sure and follow the UFO as it strafes left or right. Make sure you’re ready to fall back with your arrows, eventually the aliens will get past the first couple of feet after they land, and you’ll need to take them out before you take damage.

If you’re stuck on a level, a good trick to get you through it is to try and save at least two full mana bars for the final wave. Obviously, at earlier levels you won’t have two full mana bars, but you won’t need them at that point either — just save a full mana bar and lay down your elemental magic when a decent amount of enemies appear. 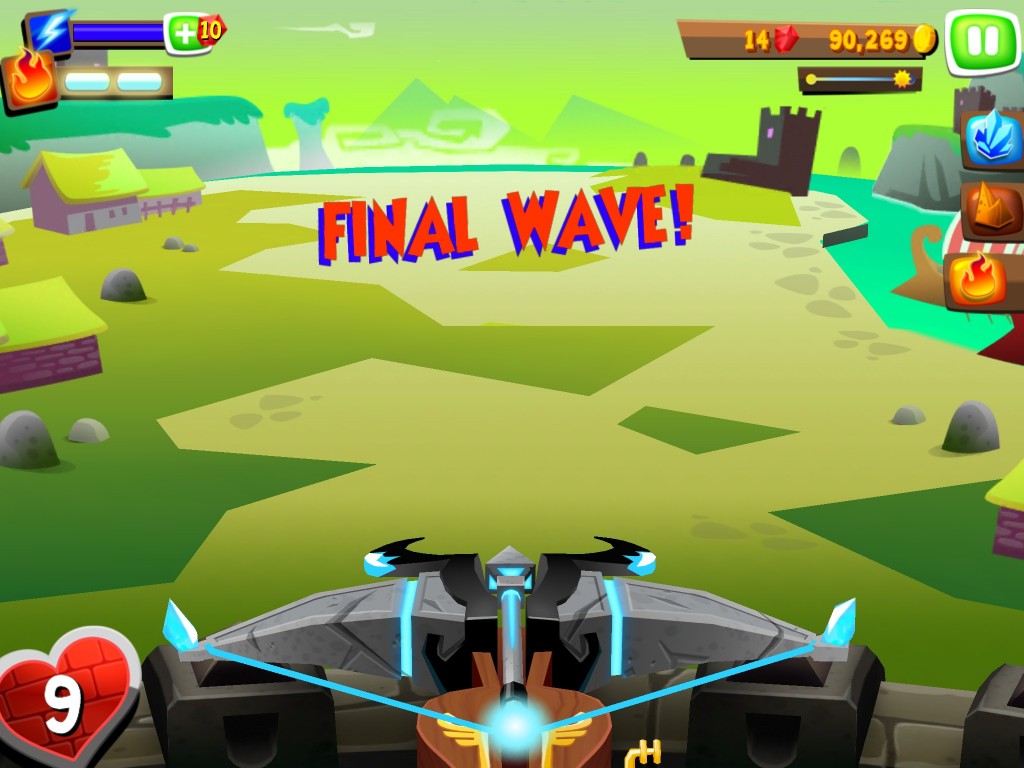 Magic can be extremely helpful in beating a level you’re stuck on, and it all comes down to placement. Don’t waste magic when there are only three or four basic minions on the field — when there are several machine aliens coming right at you, it’s a different story, and you should start blowing them up with magic and arrows.

I’ve noticed that when I haven’t played for a while, it’s really hard to jump into level 85 and dominate. Games like this are pretty reflex intensive, so it’s a good idea to play through the previous 3 or 4 levels before you start trying to beat the current mission. You can go ahead and try to beat your current level right away, but you’ll save a lot of frustration by warming up first — at least from my experience.

Once you reach level 30, you’ll be able to use fire magic, and the best way to use this is to lay it down from the top of the field to the bottom (or vice versa). That way, when the machines start coming with more HP than other minions, you’ll be able to take them out using only fire. When you do this, you can also use that time to focus your arrows on the opposite side of the map. 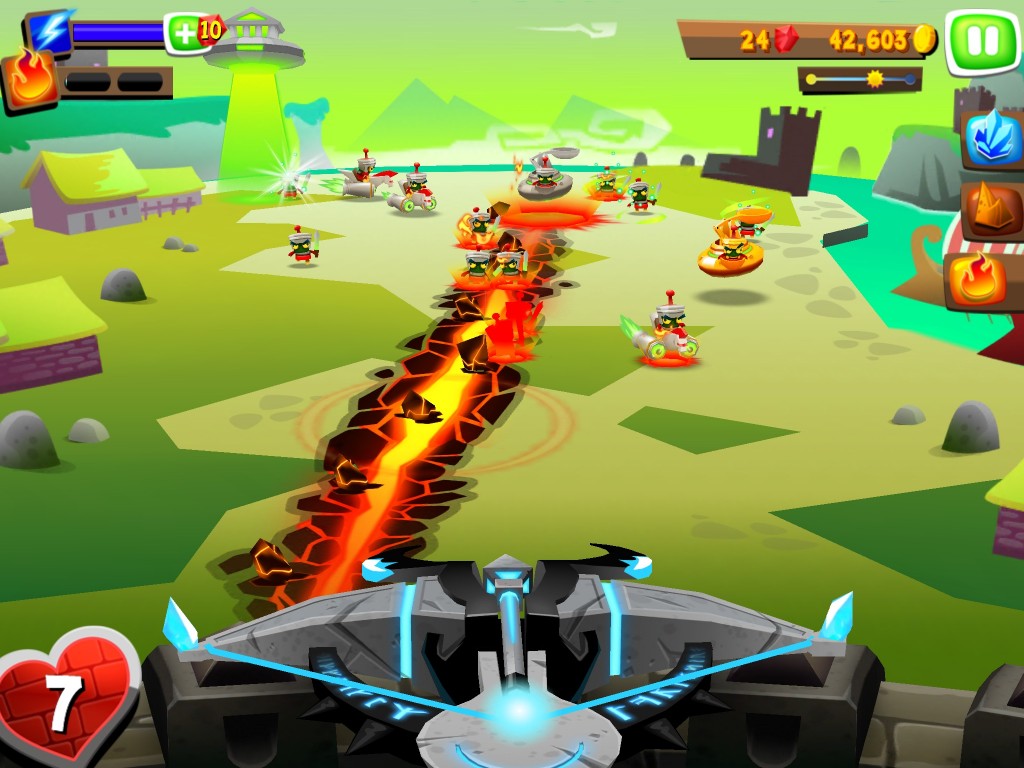 If you’re using Tip # 3 to save mana till the final wave, throw down two or three fire lines vertically and you’ll have very little trouble maintaining the rest of the battle field.

You’ll notice that when you hit a bomb alien, it explodes and takes out any nearby aliens as well. If you wait until they are grouped, you’ll be able to take out several minions with one normal arrow, it’s basically like a free mega shot. This can be hard to do, but you need to make sure you don’t just stop shooting arrows to focus on the bomb, keep shooting arrows at aliens who are away from the bomb, and then hit the bomb when they are grouped on the other side.

Tip # 7 – Got Defeated? Try Again with a Different Wave Structure

Every time you play through a level, all of the waves – with the exception of the final wave – are going to be slightly different. Sometimes one wave might be more difficult than another depending on which playthrough of the level you’re doing, so keep trying to see if you can beat it with different variables. 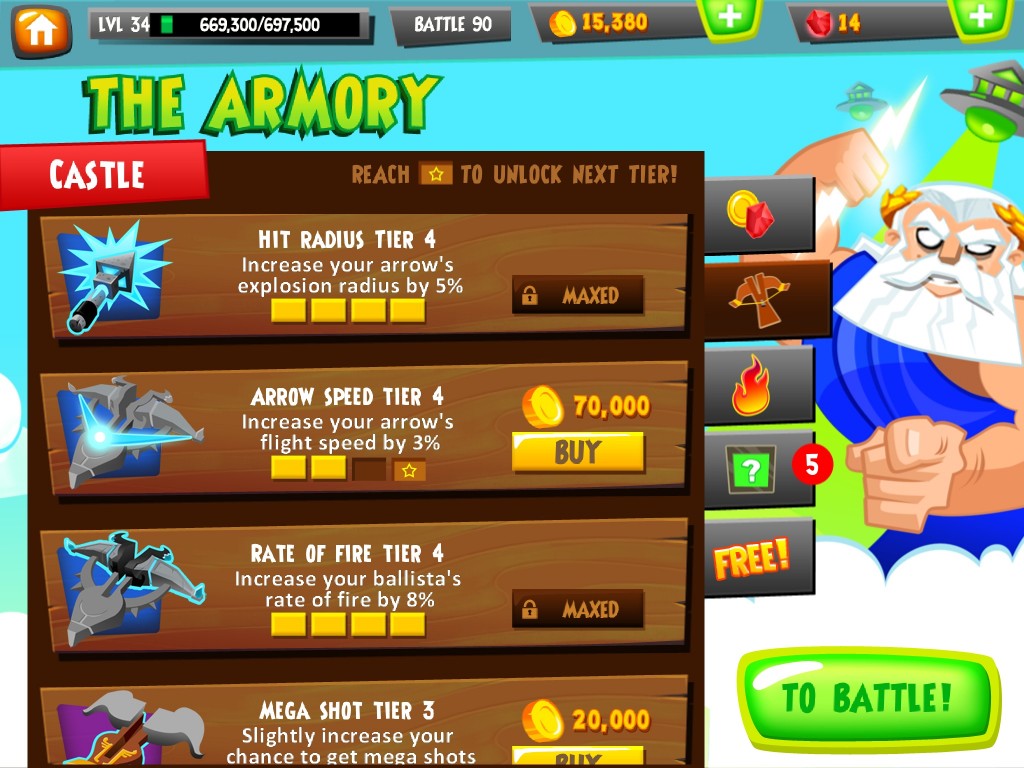 Out of all the statistics you can level up, you should invest the most into increasing your arrow’s hit radius and fire rate. These two combined are much more powerful than evenly leveled stats across the board. You should definitely throw some money at your other stats, but try to keep these two at least a tier or more ahead. Stats max out at tier 5 too, so it can be a good idea to get them maxed as fast as possible, and then focus on everything else.

Hopefully you’ve found something that is at least a little but helpful in your next bout with Romans from Mars, and feel free to post any of your own tips or suggestions below.