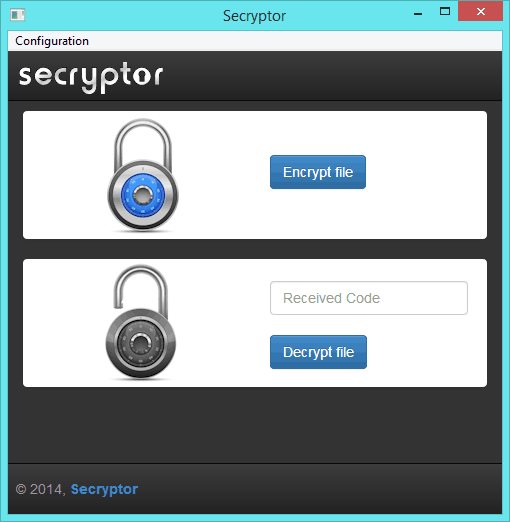 Encryption is quite a hot topic in this time and age but apart from security, most users also associate the word with complexity. Secryptor Basic wants to take that out of the equation by providing people with the ability to encrypt their files with a few clicks.

The setup is quite easy to follow with the only thing that might confuse some users being the association of .skt files with the application. You should leave that box checked as those files can only be handled through this program. The supported operating systems are Windows 7 and 8 as well as OS X 10.6.6 or later. Android and iOS versions are also offered.

True to the simplicity-based design, the interface looks like it leaves a lot to be desired. The configuration options are almost non-existent so the user does not have a lot of choice regarding what happens to the files. Clicking the “Encrypt file” button allows the user to browse their computers, find the files they wish to be encrypted and import them into the application. An encrypted .skt file then gets created with the user being able to choose where they want to store it.

This is where the application’s other major attraction comes in, the Dropbox integration. Users with a Dropbox account can opt to link their accounts with the application so that their encrypted files get automatically uploaded to the cloud where they can be accessible from anywhere. Security concerned individuals who fear about their files being hosted in the cloud will love this integration as they can now store their files online as securely as possible while also having access to them from multiple devices at any time they wish.

Of course, the Dropbox integration is far from mandatory and users can opt to store their files locally as well which also works. Those files can then be transferred to external drives and they can be decrypted using the application in any other computer. Seeing as how the program is tiny and entirely free, this opens up a lot of opportunities, especially for people that need to have access to their files across multiple devices but do not want to deal with the cloud.

Decrypting the files is almost as easy as encrypting them, a process which is made even more intuitive via the drag and drop support offered by the application for .skt files. Users can take their Secryptor Basic processed files, drop them into the application’s window, enter the password and access them without a hitch. The only problem I have noticed so far is that both of these processes can take quite a lot of time for seemingly no reason at all which can definitely be irritating when you need to have quick access to the encrypted files.

If file encryption looks intimidating to you, using Secryptor Basic will definitely change your mind for the better and put your mind at ease with its secure file encryption. The basic processes should provide inexperienced users with all the security they need while also retaining from the overly complex configurations of similar offerings.