The Chromecast is a name frequently mentioned in tech discussions and there are plenty of good reasons for that. This tiny little device can instantly turn dumb TVs into smart devices while it simultaneously frees up your hands by allowing you to “cast” content directly on your TV without even getting up from the couch. For those of you who have finally given in and bought a Chromecast or who are on the verge of buying on, here are some simple instructions on setting the device up and using it from both your PC and your smartphone.

When we first received our Chromecast, we were led to believe that the setup process was convoluted by the reality could not be more different than that. After you plug in the Chromecast in your TV, turn to the appropriate input on your TV. This will depend on which port you plugged the Chromecast in so you will need HDMI 1, HDMI 2 or something to that effect.

Now, the actual setup is a bit different depending on the Chromecast you have (1st or 2nd gen) as well as the type of device you want to activate it from. Google’s streaming stick can be activated from Android, iOS and Windows devices. Setups from OS X and even Chrome OS are not yet supported though you will be able to use cast content from both operating systems once you have a working Chromecast. Grab any of the supported devices and head over to the Chromecast Setup page where you fill find links for the Chromecast app. This is not an optional app, it is required for the setup so download it as soon as possible. 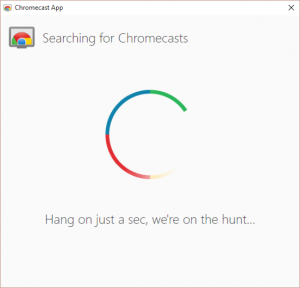 The exact steps will differ on your device but the Chromecast app will provide you with on-screen instructions for everything so just follow them and you will be golden. Essentially you will be pairing up the Chromecast with your device and your house’s Wi-Fi network so the process will not take more than a few minutes. The only thing I would like to note is that you should enable guest mode which allows people in your house to cast content to your Chromecast without having the password for it, as long as they are in the same room with the device. If you run into any trouble, go to this support page or drop a comment down below with your questions. There is also a troubleshooting section further down this post that you can use to fix some basic issues.

“Casting” is a term you will get familiar with very quickly. Google’s device works much like your cable provider as content is transmitted to the Chromecast and then displayed on your TV. The Chromecast is something like a transmitter which is why you can both cast content from services like Netflix and mirror your device, with some latency. The whole thing may seem a tad too complex in the beginning but by the time you cast your first Netflix movie, I can assure you that all will make sense.

Casting content from Android and iOS can be done in one of two ways. The easiest and most obvious one is to grab a Google Cast-enabled app such as YouTube, Netflix or Spotify. Each of those apps has a “Cast” button that looks something like this. 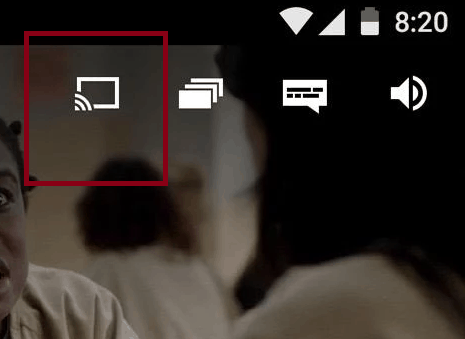 Tapping on that button will let you select your Chromecast and start casting whatever content you are viewing immediately. Top stop casting, tap on the Cast button again and select the Disconnect option. There are apps you can use to stream videos, songs, photos and even documents to your Chromecast so just search for compatible services and you will have a full streaming station in no time.

In Android devices, users can also choose to mirror their entire screens on their TVs. To do that, open the Chromecast app, open the navigation drawer, tap on the “Cast screen/audio” button, select your Chromecast and you are done. Note that some devices are not optimized for screen casting as they may lack the necessary power for a seamless experience. The Chromecast app will inform you if your device does not fit the power bill but you can also search for supported devices in this page.

Once you have a working Chromecast, your operating system does not really matter anymore. As long as you have Google Chrome, all you need is the Google Cast extension. After you install the extension you will notice a Cast button at the top right corner of your browser. Tap on it and you will see your Chromecast. Selecting your device will instantly cast the tab while clicking on the downwards-pointing arrow will provide you with additional options depending on the page you are currently on.

Some websites, such as YouTube and Netflix, are Google Cast-enabled services. What that means is that those websites play their content directly on Chromecast and your PC simply sends the links over to get the process going. When casting content from these kinds of services you can get Full HD (1080p) versus the standard HD (720), you can shut down your computer without interrupting the cast and there is virtually no strain in your computer as everything plays from the Chromecast. 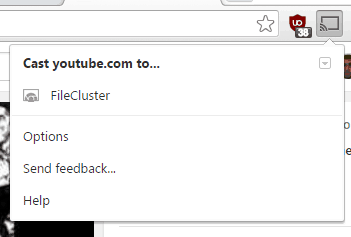 With that said, users are free to cast any tab they want by selecting the respective option from the Cast button. And what few people know is that Chrome supports a wide range of file types so websites are not the only things you can cast. To see what I am talking about in action, find any video file in your computer and drop it in Chrome. This will open a new tab with the video so you can play it normally. However, casting videos like that requires a fair amount of processing power as well as a very decent internet connection otherwise the playback will most likely lag a fair bit. For audio, things are much better as there is a dedicated option which eliminates lag and echoing so most songs should play perfectly. 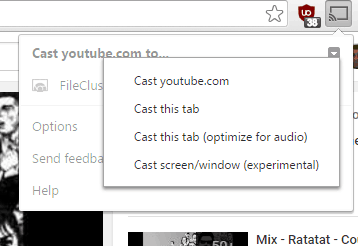 Finally, you may have noticed an option that allows you cast your entire screen. You should also notice the little disclaimer that says this function is experimental and when Google says that, you are in for a buggy ride. Casting your entire screen should work fine for simple tasks but do not think you will be loading up VLC and casting the content on your TV because there is very little chance it will work, especially without issues.

While each device and app may have its own issues when interacting with the Chromecast, there are some basic things you can address regardless of what you are using with Google’s streaming dongle.