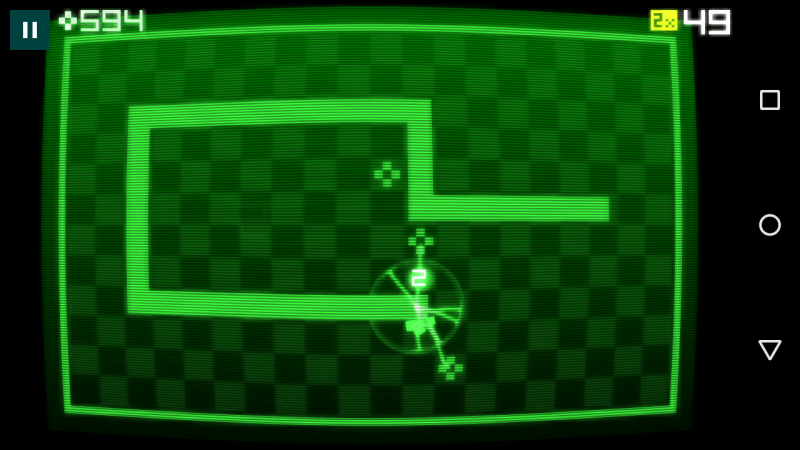 Snake Rewind is probably the best Snake game available in the mobile market right now as the original creator of the classic games for Nokia devices has revitalized the title in the modern era of mobile gaming. I have already spent a fair amount of time with the game in my Android device and since I have introduced it to my friends, many of them have asked for some tips and tricks as the game has added a slew of new features that make the game much more entertaining but also a bit more complex. Allow me to share what I have come to learn about the game so that you can surpass your own friends in no time! 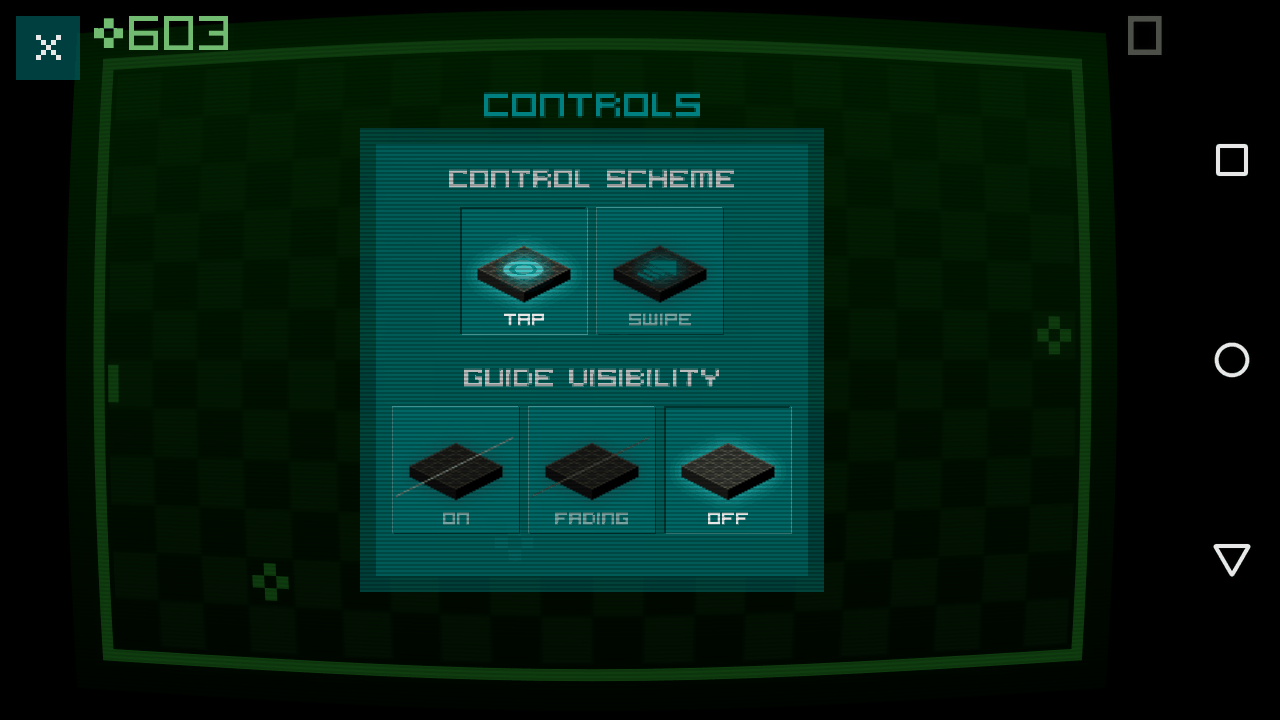 By default, the controls are set in tap mode for many reasons. Tapping feels a lot more responsive and is a lot less buggy than swiping. It will feel a bit strange at first because you need to tap above the snake’s head to go upwards otherwise you will experience strange movements. You would be forgiven for thinking that swiping is better in this regard but unfortunately the controls glitch out sometimes and register more movements than you have issued. At first I would advise you to tap on the lines that make up each stage because that is the only way to guarantee the snake will move in the direction you want it to. Both control methods will seem strange to those that were so used to physical controls but I would still recommend tapping as the method of choice, at least until an update is issued that refines the swipe system.

Though I spent many hours playing Snake on my first Nokia phone, I never actually played the game on a smartphone. Playing Snake Rewind in landscape mode was a bit strange at first but I have come to appreciate it over time. I found that the tapping controls work much better on landscape mode than the swipe ones. In portrait mode, the game feels a lot more familiar and the swipe controls work much better. It is surprisingly hard to play with one hand even in portrait mode, especially if you have a large device. The choice is ultimately up to you but I highly suggest trying both out for a little while before settling as you might be surprised by what feels more comfortable to you. 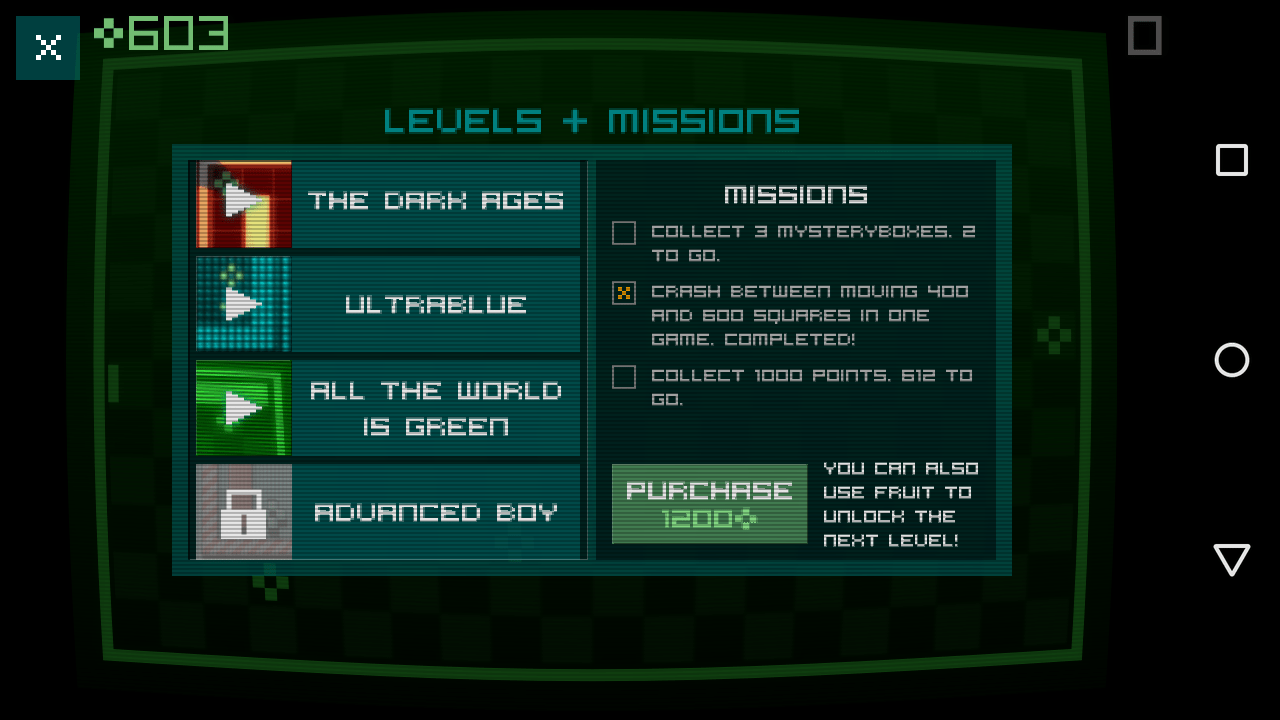 While the game allows you to immediately purchase new levels with Fruit, the best way to unlock levels is by completing missions. You can check them out before starting a new game in the Levels & Missions menu and in-game by pausing. Some missions require very specific things like crashing while you have moved between 400 and 600 squares in a single game but the missions update themselves when you pause so you can always keep track of what is happening. 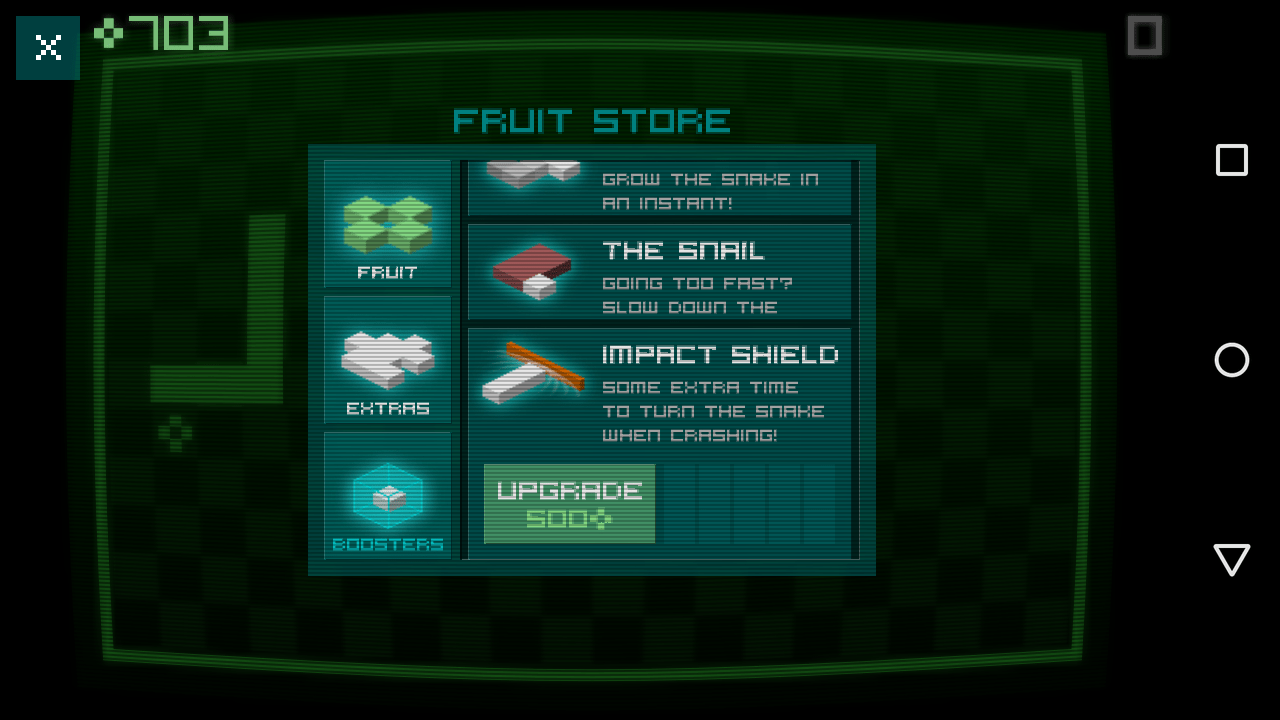 The Fruit Store lets you upgrade the power-ups you get in-game so that they have improved effects. It also features a couple of very neat upgrades that you cannot get otherwise. The first upgrade you should get is the Impact Shield which will allow you some extra time after crashing to turn your snake around without dying. This is extremely important and you can probably collect the 500 Fruit it requires after a few games. After that you should only upgrade the power-up you like the most and keep your Fruit for later. Head over to the ‘Extras’ tab to check out the more expensive power-ups. For 10,000 Fruit you will be able to get a 150 points at the start of each game with Point Cube. For 5,000 you can purchase Fruit Garden which adds an extra Fruit in your screen at all times so you have 4 instead of 3. This is a game-altering upgrade so you should consider keeping some money for that. The rest of the ‘Extras’ tab like Rumilus Hero are cosmetic upgrades which add nothing but give a unique flair to your snake.

5. Not all power-ups are actually good

Whenever I see a power-up in any game it takes a lot of effort to resist the urge of taking everything but in Snake Rewind, not all power-ups are good. For example, the Supersizer upgrade will instantly increase the size of your snake so it is only good if you are looking for a challenge. The Snail upgrade might slow you down but that means you might lose another, more important power-up as they all disappear after a while.

6. Refrain from buying Rewind all the time. 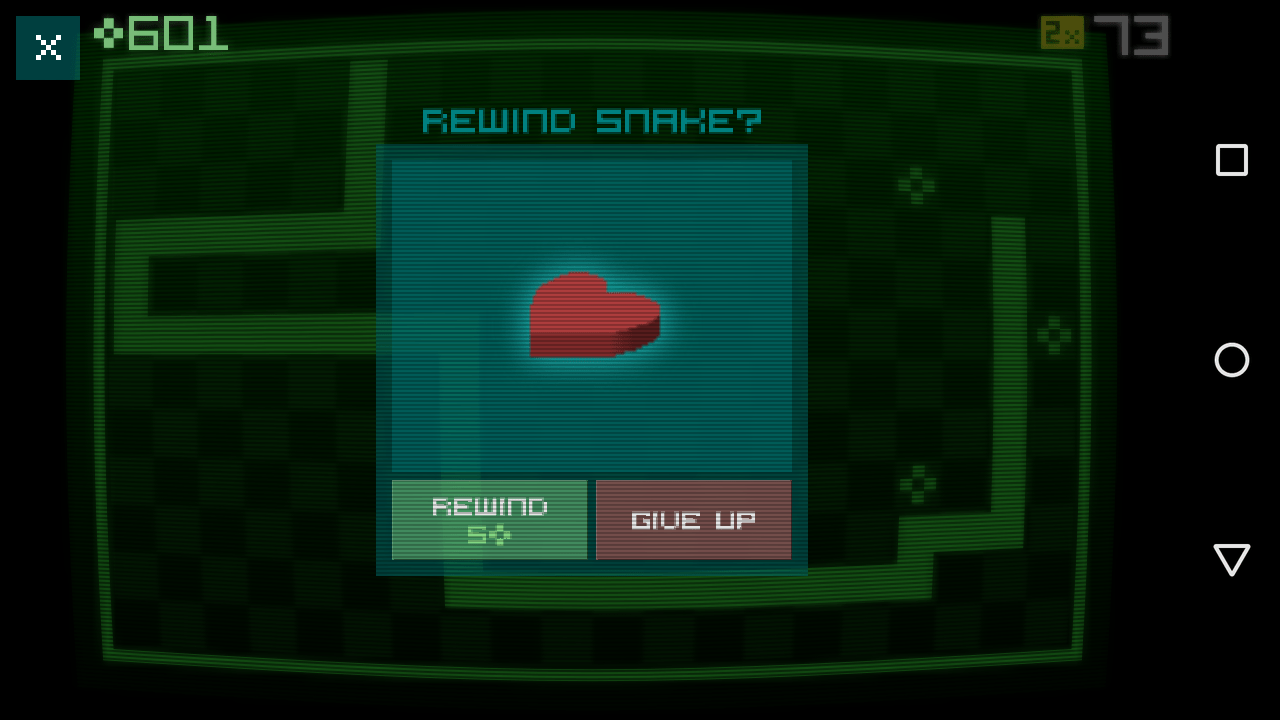 The Rewind feature is obviously a huge deal as it allows you to continue playing and thus decreasing the difficulty of the game immediately. Early Rewinds cost a mere 5 Fruit but as you grow longer and use the feature more it will cost double each time. If you are going for a high score and have reached a respectable point in the game then Rewind is definitely worth it, otherwise you should keep your Fruit to buy upgrades that will instantly improve the game anyway. The cost of Rewind can be reduced via the Rewind Discount upgrade in the Store. 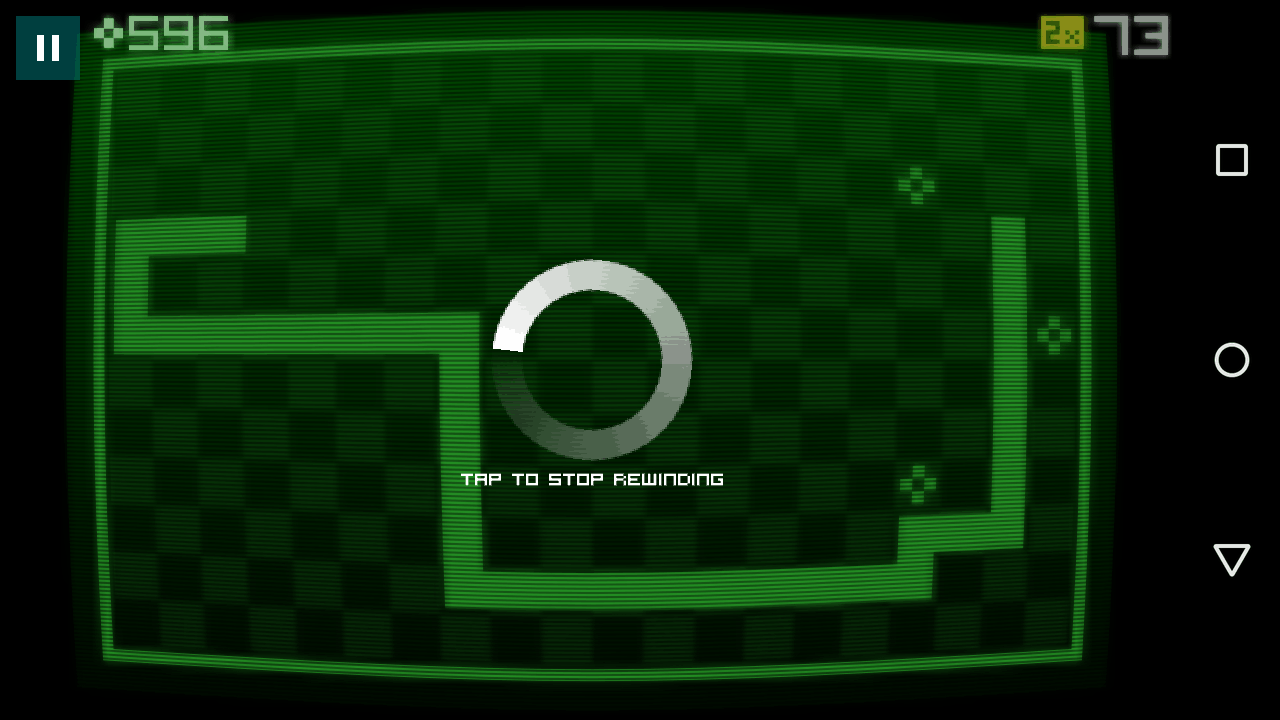 When you use Rewind you might have noticed that the game allows you to stop the process before it completes simply by tapping on the screen. Before choosing to Rewind you should check out whether there are any nearby upgrades or Fruit so that you can stop Rewinding prematurely. Sometimes this will even let you create elaborate navigational paths which will make that particular game go even better than if you had never even crushed!

8. You can cheat by pausing the game

If your snake has grown large enough and you need to plan your moves, pause can become your friend. Pausing not only lets you think about the paths that you want to go through but it also lets you start the game more slowly so you have more time to make your moves. And yes, I would consider this to be cheating but since the game allows it and pause is absolutely necessary at points, you might as well take advantage of it when you find yourself in a tight spot.

9. Get extra Fruit by Daily Rewards and ads 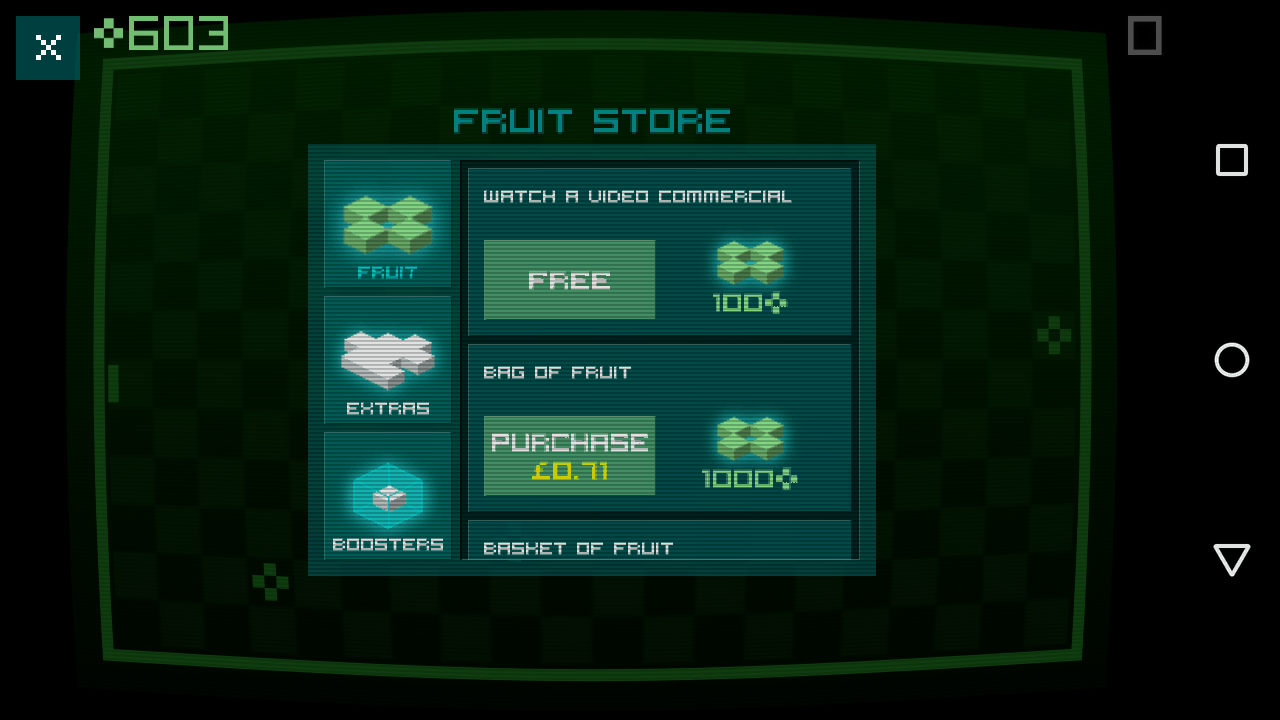 Apart from actually playing the game and purchasing them with real money, there are two other ways to earn Fruit. The first is simply to play the game every day as you will get a Daily Reward (usually 20 Fruit) just by booting it up. The other method is to watch ads as each one will give you 100 fruit. Ads are limited so if you do not want to spend your money in the game I suggest watching them whenever they come up, both so that you can support the developers and so that you can get the invaluable Fruit currency you will come to crave.

Well that is all for today but if you have another tip or trick you like to use in Snake Rewind, make sure you let us know in the comments down below! And if you still have not downloaded the game you can get it for free on Android, iOS and Windows Phone.