No Video
OR network client

Advanced Onion Router is a mobile client specially designed to be the client for OR networks and the main idea is for it to provide alternative for Tor + Vidalia + Privoxy bundle users of Microsoft Windows.

Some of the basic improvements are the support for both HTTP and HTTPS protocols on the identical Socks 4 or Socks 5 ports along with the HTTP filtering of the header which generates false identity dependable headers each time the identity changes.

Support for proxy chains is also there, along with the improved UNICODE paths and advanced support for NTLM proxies.

Advanced Onion Router also has a unique user interface that is much more user friendly and thus it makes Tor’s options and features more accessible to regular users, and allows for easy maintenance of local ban lists for banned IP addresses.

The new interface also brings easy to use private identity isolation and a point and click solution for interceptor tool which can redirect incoming connections from programs which don’t have support for proxy servers. It intercepts the connections by sending them fake info about the localhost and allows for support of .onion addresses.

The interceptor can also estimate AS paths for each and every circuit and thus prevent intersections of AS paths and it can forbid the creation of circuits by using only nodes from various countries.

Advanced Onion Router comes with awesome multi-language support and plugin support.
The slick user interface allows for some of the highly advanced options to be executed lightly, with ease or even automatically.

An easy to configure database server equipped with support for graphs and geo-algorithms
21 / 5,504 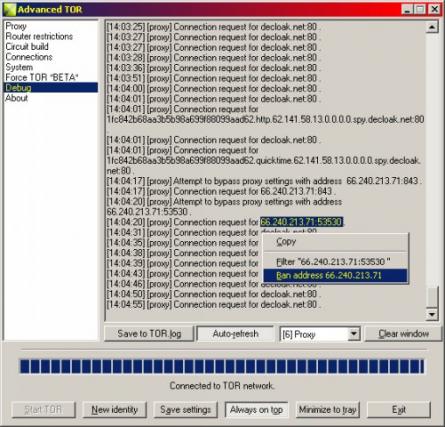