Useful program for casting the screen of an iOS or Android device to the PC or Windows Tablet.

AirDroid Cast is a handy application that was developed in order to cast the screen of one’s iOS or Android device to their PC, or Windows tablet, which will do just that with the help of two apps, one on the phone and one on the Windows device.

The installation process is quick and easy, and users will need to scan the QR code or add the code that is shown on the windows device, using their smartphone, which also works with tablets that have the same mobile operating systems.

The screen mirroring technology is called AirPlay, for iOS devices, and users can adjust some of the settings for this particular feature in the Settings menu of the program.

Android users also have a feature called MiraCast which is basically the same algorithm.

AirDroid Cast is a great program for all users that need to cast the screen of their iOS or Android devices to their PC or Windows tablet.

Great application that provides users with many basic cleaning tools.
0 / 333

Remove unwanted Windows 10 applications that are bundled with the OS, and even hidden Microsoft apps
14 / 1,913

Flash other firmware or jailbreak your iOS device with this robust application
27 / 3,093 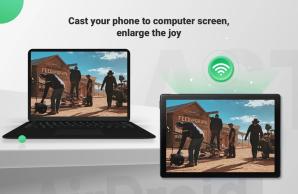 Mem Reduct 3.4 Keep track of your computer’s memory status in real time with this handy and convenient tool
Latest Articles
How to use Google translate offline on PC
The Best Computer Temperature Monitor Apps
Best sites to download free music
Best torrent downloader software
5 Best Parental Control Apps for iOS
Best Android Emulators for PC and Mac
How to reinstall the Realtek audio drivers in Windows 10
How To Make YouTube Kids Safe for Your Children