Share your iPhone/iPad or Android screen with your computer

Mobile devices are the new norm and since we're mostly on our phones on a daily basis, it's safe to say that we do most of our browsing and gaming on these handheld devices. While some games are fun on your phone or tablet, there are some games that are worth playing on a bigger screen. Or maybe you want to watch some videos from your phone directly on your computer.

Enter ApowerMirror, a powerful application that lets you mirror your iOS or Android device directly to your computer. You can play games, draw or do any activity while mirroring it on a bigger screen.

The app's interface is very simple to use, it's intuitive and allows you to set-up your devices and your connection with just a few clicks. You can connect your devices via USB or Wi-Fi, whichever do you prefer. However, in case of iPhones or iPads, the connection can be made only via Wi-Fi, so that's a thing to keep in mind if you have an iOS device.

The connection is being set-up in minutes, once connected, the associated ApowerMirror mobile app will be automatically downloaded to your phone or tablet. Once everything is installed and activated, you'll notice that your device is perfectly mirrored on your computer screen. You can start playing games or watch videos instantly, on a bigger screen.

However, what's very important is that ApowerMirror doesn't only mirror your phone, it allows you to control any app from your device with the mouse and keyboard, making most games a pleasure to play, if you're already used with playing with your keyboard and mouse. Also, a very powerful feature is the ability to record video of your gameplay or take screenshots instantly, at a press of a button.

While ApowerMirror isn't the only application of its kind, it's definitely one of the best out there, it's feature-packed and it's used by most of us here at BytesIn on a daily basis. The software is free but you can use only 1 device at a time, you will be shown ads and you won't be able to use the full-screen feature. If you opt-in for the paid version, you have the full experience, you can mirror up to 3 devices at the same time and evidently, no ads will be shown.

Collection of network utilities for administrators who want to remotely control machines, including shutdown and restart, Task Manager, and remote user details
13 / 2,054

Download and install drivers for you AMD card with this simple and straightforward application
24 / 2,499 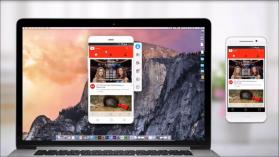 Mem Reduct 3.4 Keep track of your computer’s memory status in real time with this handy and convenient tool
Latest Articles
How To Make YouTube Kids Safe for Your Children
Best email apps for your iPhone
How to Disable Apple Health Step Counter on iPhone
How to reduce eye strain from your iPhone
Top 8 Best VPN Services for 2022
6 Best Game Launcher Apps for Android
Copy and listen to music on your iPhone without using iTunes
Top 5 Knitting Apps for Android and IOS