Audacious is a reliable open-source audio player that is pretty known on Linux and was created in order to allow users to listen to audio files, create playlists, and edit metadata.

Users will have the options to choose between a Winamp-like and GTK+-based interface, with the first one offering a small-sized version of Winamp with similar playback controls, equalizer, and playlist manager, and the GTK+ interface comes with support for multiple tabs.

Users will be able to drag and drop the content of a folder directly in the main panel, stream music from custom URLs and play audio CDs, while also offering support for a wide range of audio formats like MP3, AAC, FLAC, SHN, WMA, WAV, and MIDI.

They will also have the possibility to import or export the playlists, and also sort the songs that are included in a selected list by track number, title, artist, album, genre, etc.

Audacious is a very useful application that doesn’t take much time to get the hang of it and allows users to listen to audio files, and more.

A simple application that can play YouTube music directly on your desktop
39 / 2,970

Create a music system throughout your house and control the playlists assigned to each room with this intuitive piece of software
8 / 1,341

A portable, lightweight tool that lets you open, edit and play MIDI tracks
5 / 1,228 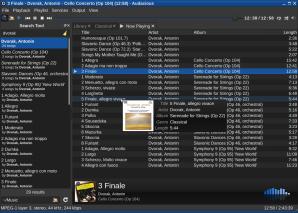 foobar2000 1.6.11 Very good media player
Latest Articles
How To Make YouTube Kids Safe for Your Children
Best email apps for your iPhone
How to Disable Apple Health Step Counter on iPhone
How to reduce eye strain from your iPhone
Top 8 Best VPN Services for 2022
6 Best Game Launcher Apps for Android
Copy and listen to music on your iPhone without using iTunes
Top 5 Knitting Apps for Android and IOS