No Video
DJ Music Mixer is an extremely powerful audio application that allows you to mix and create music tracks with ease. There are many professional DJ programs on the market and over the years, DJ Music Mixer developed as a preferred choice for many musical artists.

The application comes wrapped in a sleek and useful user-interface, very easy to master by beginner DJs as well as professionals. DJ Music Mixer has a 2-deck layout for mixing, as you would expect, with a foray of features and controls that will, no doubt, appeal to many musicians.

DJ Music Mixer also comes with a lot of samplers, audio channels, a powerful playlist module, and a dozen other professional tools. Evidently, the software comes with a powerful mixer that rivals even the most top-tier DJ apps on the market.

What's probably one of its unique features, DJ Music Mixer also comes with a video mixer that lets you mix both audio and video tracks, allowing you to create visual mixes with ease.

If you're looking for a powerful DJ mixing app, DJ Music Mixer lets you create both audio and video mixes with minimal musical knowledge, while offering you a powerful set of tools and features to satisfy even the pickiest of users.

A multi-purpose audio tool that can read almost any available audio format
10 / 2,249 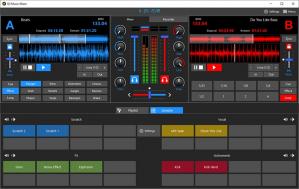 iTunes 12.10.10.2 Share and listen to music on your computer
Latest Articles
How to Download Videos from Twitter
How to Reduce Steam’s RAM Usage from 400 to 60 MB
How to Watch Netflix Videos Offline
How to Blur Pictures Using PowerPoint
How to Optimize Windows 10 For Gaming
5 Useful Search Engines for Social Networks
How to Get a Cheap (or Free) Windows 10 License
Top 5 Best DNS Servers for 2020