Watch Video
Twenty years have passed since the Prime Evils were defeated and banished from the world of Sanctuary. Now, you must return to where it all began – the town of Tristram – and investigate rumors of a fallen star, for this is the first sign of evil’s rebirth, and an omen that the End Times have begun

You can play the following hero classes:

Diablo 3 also features a real-money Auction House. Use the Real Money Auction House to buy and sell items for real world currency. Then draw on your earnings to buy ever more powerful items or cash out your trades, take the money, and run. The choice is yours.

This is the official version of Diablo 3. Keep in mind that we've included the full game (in a single RAR file) rather than the installer for a faster install experience. However, keep in mind that the game might suffer several official patches upon installing.

Create a virtual world while fighting monsters in this cool game
48 / 18,356 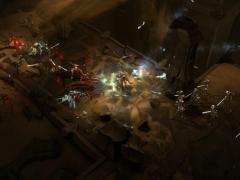