No Video
DirectX Happy Uninstall is a powerful tool that allows you to safely uninstall DirectX. There are a variety of DirectX related problems, such as damaged/missing DirectX file, DirectX error messages, DirectX registry errors, incompatible DirectX version and others, that can only be fixed by a fresh re-install.

DirectX Happy Uninstall can not only remove DirectX safely but it also has a Full-Install function that guides you into installing a new DirectX version on your computer.

- Support is enabled for both 32 and 64-bit versions of Windows 2000, XP, 2003, 2008, 2008 R2, Vista and 7.
- All versions of DirectX are supported (including DirectX 11).
- The Backup function lets you backup the current DirectX core components from your system.
- The Restore function allows you to restore the DirectX components from a backup.
- Use the powerful Disc-Rollback feature to make your DirectX just like the first installed by uninstalling the DirectX core components from your system, then installing an original core component of DirectX from the Windows Setup Disc (or by mounting a Windows setup image -.iso- via virtual drive).
- Using the Full-Install function you can easily install a new version of DirectX on your computer.

An effective application that lets you recover WPA or WPA2 network passwords
9 / 1,325

A professional application that can perform a comprehensive security scan of Files, Folders, and Shares in your entire Windows network
12 / 3,222

Explore and examine the contents of ESE databases and export data with this reliable and intuitive utility
13 / 2,178 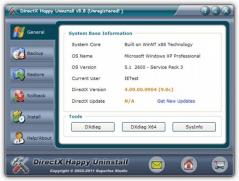 BleachBit 4.0.0 Maintain your privacy with ease
Latest Articles
How to transfer data from Xbox One to Xbox Series X or Series S
How to reinstall the Realtek audio drivers in Windows 10
How to Add and Use Shazam on Your Control Center (iPhone and iPad)
How Launch Chrome using Keyboard Shortcut on Windows
How to Install Custom Fonts on iPhone (iOS 13+)
6 Best Free FTP Clients for Windows
How to Use Memoji During a FaceTime Call
How to Use Google Lens for Solving Math Problems