No Video
DrFan is an excellent fan control software for iMacs which allows the user to better control the system fans. It's no secret for most Mac users that fan control is poorly implemented. The system prefers to underclock the system CPU and GPU instead of boosting the fan speeds to drop the temperature.

DrFan does exactly that, by adjusting the fan speed either automatically, by selecting certain temperature thresholds or manually, boosting the fan speeds when needed. The software is extremely easy to use, you just specify a thermal limit for your CPU and GPU and DrFan will handle everything.

If you want to be in control of your iMac's fans and avoid system throttling, DrFan is the best application for that. It has a very easy and straight-forward interface and everything can be set-up with a couple of clicks. The software is aimed mostly towards iMacs running Windows via Boot Camp and it's donationware, meaning it's free to use but requires a mandatory weekly update.

Observe the current GPU stats and get useful info if you want to OC your GPU
4 / 2,226

Manage and monitor the many processes on your computer with this easy to use application
10 / 1,266

A friendly and functional application that can run benchmarking tests on HDD, SSD, USB sticks and SD cards
6 / 820 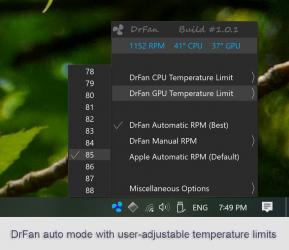