With its powerful capabilities, AIDA64 Extreme Edition can determine the performance of the system memory, CPU and disk drives.

Perform stress tests and measure performance of your computer’s CPU and RAM
10 / 1,909

Manage and monitor the many processes on your computer with this easy to use application
23 / 1,943

Benchmark your hardware and test it against other users' scores
22 / 1,893 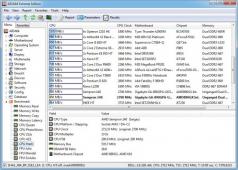