Even though Electerm is a terminal emulator, and it can also act as a comprehensive SSH/SFTP client, a simplified file manager and it's similar to the older Xshell app. It can also add libraries such as Electron, SSH2, Node-pty, xterm, and antd.

You do not need to install the application and can be run on any computer with the latest versions of Windows. It's also worth noting that Electerm is cross-platform, which means, it works on Windows, macOS, and Linux.

Every aspect of the User Interface in terms of fonts, background images, and colors, can be easily customized. It can also help users synchronize all their bookmarks, themes, and quick commands to GitHub secret gist.

In conclusion, Electerm is a terminal emulator whose audience are users who want more versatility and it allows them to modify remote files using the file manager, perform a broad range of terminal-related files, all while supporting SSH and SFTP.

A polished Electron-based application that lets you save your code snippets, code blocks, to-do lists and other types of notes
14 / 1,344

A collection of components and GUI that lets you build and run distributed multi-platform application installers
16 / 1,966 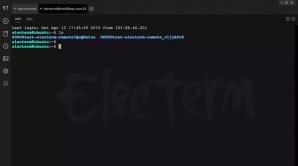 JarToExe 3.0 Easily convert Java files into executable binary files
Latest Articles
How to Save and Download Workouts on Apple Fitness+
3 Quick Ways to View and Edit Apple Notes on iPhone using Windows PC
How to Record a WhatsApp Call on Android and IOS
How to Blur Pictures Using PowerPoint
How to Send SMS Messages Using Windows 10
How to Use Google Lens for Solving Math Problems
How to Free Up RAM on your Windows PC
How to install and use the TikTok app in Windows 10 or Mac OS