FastStone Capture is great piece of software created to help you capture the screenshots you otherwise wouldn’t be able to.

The program has an option to capture everything or anything on your computer’s screen including, full screen apps, desired windows, special objects, rectangle regions and it allows for making of free hand regions to be captured. If you have a web page that needs to be captured, don’t worry since it has an ability to scroll down windows or web pages and then capture them whole.

Some of the most important features of the application include a small floating Capture Panel that can be positioned anywhere on the screen or you can minimize it to tray and use hotkeys only.

It is very well optimized and it uses small amount of resources and memory especially if it is minimized to tray.

One of the best advanced features is the support for multi monitor, so you can capture huge or double screen shots. Also one of the cool options available is the possibility to specify destination where the captured image will be sent like an internal editor, the Windows clipboard or a file.

A small and easy to use tool for capturing area screenshots with editing, printing and sharing options
4 / 919

A powerful recording tool for games, videos and desktop
1 / 1,627

A versatile application you can use to capture screenshots and record areas of your screen
13 / 1,602

A screen recording tool you can use to create professional looking movies and tutorials
7 / 1,047 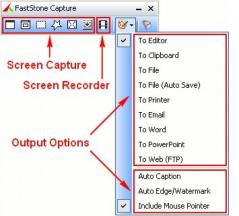 Screenpresso 1.7.16.0 Take the best screen captures in a few seconds.
Latest Articles
10 Best music player apps for Android
How to download images from Instagram
How to permanently delete text messages on your iPhone
6 Best Free Registry Cleaners for Windows
How to transfer your contacts from Android to iOS
Best torrent downloader software
5 Excellent iTunes Alternatives for Windows
4 Best Instagram Repost Apps for Android and iOS