Get rid of memory leaks in Firefox with this simple tool

Get rid of memory leaks in Firefox with this simple tool

Despite numerous optimizations throughout the updates, Firefox is still using significantly more memory than most other popular browsers. It can even get as high as 500 MBs is you keep it running for a longer time.

However, it can rise even more – there were reports of even >1000 MBs memory usage from some users. That’s because Firefox has memory leaks. For those older systems that have 2 GB of RAM this would mean Firefox is consuming half of total memory.

Firemin is a free small utility that was created to solve this problem. Use it and you won’t be experiencing anymore memory leaks in Firefox.

The tool relies on the EmptyWorkingSet API function (completely safe to use) to force the process to use less memory. In this way, Firefox will release some of the system memory so you can experience better computer performance.

A simple but useful browser add-on that allows you to create a menu with the Google service shortcuts that you need to access frequently
8 / 1,757

Reveal the invisible web trackers, bugs, pixels and beacons that study your Internet behavior and block them to protect your privacy
22 / 1,882

Useful Chrome extension to shorten links without any effort.
1 / 646

Great software that will help with an easier way to store URLs with ease.
4 / 626 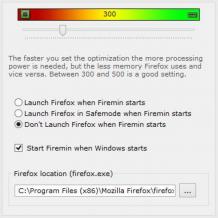