A great flight simulator for aircraft designers and pilots

FlightGear is a great flight simulator that is geared towards aircraft designers and pilots in the making. It was designed to create a sophisticated flight environment for research or pilot training.

The simulator sports three primary Flight Dynamics (e.g. JBSim, YASim, and UIUC), and it is designed to simulate and construct plausible aircraft, without the need to configure all the traditional aerodynamic test data.

The first model that was written in C++, allows you to define the movement of an aircraft or rocket.
The second model, YASim, comes with a different approach than JBSim, and it can simulate the inferential effects of the airflow.

The third model, UIUC (based on LaRCsim) expands the flight simulation to a whole new level.

The main window enables you to select the plane you like, ranging from small models to large airplanes, and after selecting the location and other configurations, the simulation will start.

Overall, FlightGear is a great flight simulation designed for aircraft designers and pilots in the making, and even though it comes with a lot of features and advanced functionality, it doesn't need a lot of system resources.

Emulate Wii U games on your computer and use your keyboard as a controller
29 / 1,939 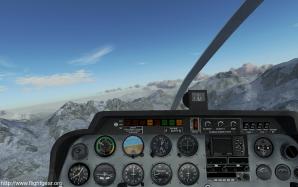 Latest Articles
How to transfer your contacts from Android to iOS
The Best Apps for your iPhone (2021 Edition)
How to download images from Instagram
10 Best Mobile Finance Apps of 2021 (iOS & Android)
What is the best archiver for Windows?
How can you change your Twitch username
How to Download Videos from Twitter
How to Install Custom Fonts on iPhone