Save your files that are located on damaged on corrupted DVDs, CDs and other media

Save your files that are located on damaged on corrupted DVDs, CDs and other media

Many people around the world have a lot of data stored on CDs or DVDs, and some of them have even data stored on old almost forgotten floppy disks. If you are among one of those people, you are probably aware that as the time passes some of that data may become unreadable.

If the data becomes corrupted, GSA File Rescue is a great tool that will help you recover as much of those files as possible. Most of the programs will not allow you to open damaged files even if just a small portion of that file is unreadable. GSA File Rescue successfully solves that problems and copies all of possible files for later preservation.

In many cases when the file is damaged, especially if the file is large like a movie or a large image, the damage done to the file is literally unnoticeable and the file can be opened normally, but most of the software blocks the opening of file due to security reasons, because they deem that file to be corrupted which means that it can in a long run harm your PC. However, this almost never happens, over 99% of the files corrupted are just unreadable due to damage of the disk drive rather than them being harmfully corrupted, thus GSA File Rescue is a great tool that will easily recover your lost and corrupted files.

GSA has support for batch mode, which allows users to operate a lot of CDs and DVDs and save a lot of data from them, before they become completely unreadable. This is a great option for everyone who has collections of different data stored somewhere like movies, music, older programs, vacation photos and video etc.

A practical utility that can monitor and show the status of serial ports
16 / 1,245

Easily backup and restore your files to and from your local hard drive or cloud storage
8 / 1,329

Recover all of your lost data and other important information with this handy and powerful utility
17 / 1,851

One of the best application that will aid users in recovering their lost digital items.
6 / 517 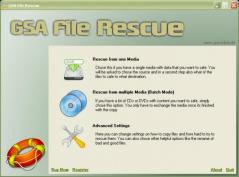