If you are a PC gamer and don't really play that much on your mobile device, you're probably missing out on a lot of cool games. With the help of Android emulators, however, things changed and we, as PC gamers, can play any mobile game on our PC, with ease.

There are a lot of Android emulators for the PC, we even covered the most popular in an article not so long ago. You can still use any of them to play just about anything, but GameLoop is the official Tencent Android emulator, which means some games are optimized better and it's just easier to get all the hot games and play them instantly.

GameLoop acts as a directory, kinda like Steam but for mobile, and let's you install and download all the hot mobile games such as PUBG, Clash of Clans, Call of Duty Mobile and many many more. You can create a library with all the games you want to play, install and play them and view various stats for each played game. In other words, if you want to dive deep into the mobile gaming scene on our PC, GameLoop is the emulator to go.

What's probably more important than anything is that emulated mobile games sometimes have clunky controls or small bugs which come with the territory, GameLoop has a lot of games optimized and backed by their respective developers to provide a smooth and seamless gameplay.

All things considered, if you want to start mobile gaming on your PC, we strongly recommend GameLoop, it's built by Tencent, offers the most popular games on the market right now and its optimizations are hard to beat by other Android emulators.

Useful application for gamers that need a competitive advantage in shooter games or just to improve the aim.
1 / 719

Handy tool for speeding up loading and running times for modern games.
1 / 687

Stay up to date with the latest games and game-related news from Ubisoft
34 / 2,889

Reliable software for playing Nintendo DS or 3DS games on a computer.
2 / 277 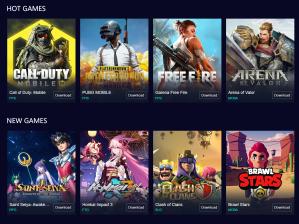