Inno Script Studio is a state-of-the-art GUI that allows you to generate and compile scripts for Inno Setup Compiler. The tool lets you easily create Windows installers as the friendly interface can generate Inno Setup Scripts with less manual editing involved.

Inno Script Studio works perfectly, regardless if you need a Windows installation for a small free app or a larger more complex piece of software.

Inno Script Studio provides help to simplify the creation of Microsoft Windows installations by allowing the generation of Inno Setup scripts by use of the intuitive interface to reduce the need to manually edit the Inno Setup scripts.

If you’ve created a freeware application, or even if it’s a large and complex application, Inno Script Studio will help you create the perfect Windows installation that fits both you and your customers’ requirements.

Furthermore, the tool supports the Unicode as well as the ANSI Inno Setup compiler versions so you can compile your scripts with no need to run multiple version of Inno Setup IDE. Among other useful features, Inno Script Studio offers the possibility to add Pre & Post compile actions to standard Inno Setup scripts, show and edit all syntax elements, use plugins and access the generated time stamped log files, as well as export them to your hard drive as text files.

A handy Inno Setup extension for removal of installed apps
11 / 2,189

Design HTML5 apps in a visual manner with no need for programming skills
30 / 3,419

A robust application that lets you efficiently create installers for your software products
65 / 3,924

Select from numerous question types and create your own test
34 / 2,484 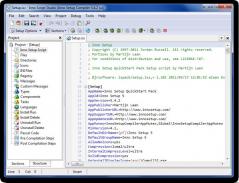