No Video
IntelBurnTest is a popular stress-test software that's used by overclockers to test the stability of their systems after various hardware boosts. The application is based on the all popular Intel(R) Linpack program that was developed by Intel using the same stress-testing engine they use to test their factory CPUs.

IntelBurnTest simplifies the use of Linpack while bringing the same level of functionality. While the application itself hasn't been updated in a while, it's worth noting that it can stress-test newer CPUs reliably as well as various new memories and chipsets.

While Prime95 is a user-favorite stress-testing software, many users choose IntelBurnTest due to the fact that it adds more stress to the system, lowering the effective time of testing between various overclocking levels.

It's also worth noting that IntelBurnTest comes with a real-time error checking feature which makes it even more easier for testers to identify various problems.

If you're an overclocker and you want to test the stability of your system after various OC levels, we strongly recommend IntelBurnTest.

A free hardware monitor for Windows capable of displaying resource usage on an in-game overlay
4 / 1,972

A useful tool that can show an impressive amount of hardware-related information about your computer software
18 / 3,582 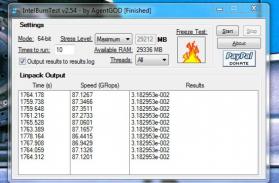