LibreCAD is an easy to use tool that allows you to effortlessly create and edit 2D CAD files, providing support for a large number of formats. The tool provides comprehensive help documentation as it comes with a rich set of options.

You can work with an extensive number of formats when it comes to importing data, like GIF, PNG, BMP, ICO, TIFF, TGA, PPM, DXF, JWW, LFF, CXF, XBM and many others. A similarly large number of formats are supported for export, including PDF, PNG, ICO, SVG, BMP, DXF, ICNS, DDS, LFF and more.

Your drawings can include various objects like points, lines, polylines, circles, ellipses, text boxes and splines. Any of the elements included in your projects can be aligned, mirrored, copies, scaled, trimmed, divided, stretch, deleted and the list goes on.

On top of that, you can use LibreCAD to calculate the distance between two pints, the angle between two lines and the total length of the currently selected object.

A GUI for SHELXL that allows you to visualize, manage, and edit three dimentional structures of atoms
6 / 1,733

Create stunning 3D models and shapes with this useful piece of software
29 / 3,144 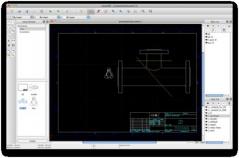