useful application for users with Logitech webcams that want to customize their recordings.

Logitech Capture is a great application for all users that are using a Logitech C920, C922, or BRIO webcam, to allow them to customize their recording and to allow them to create video content with the help of a very accessible UI and a simple design.

Users will also have the possibility to use two webcams simultaneously for video recordings if they are of the same type, and the program will let them view both feeds in the same window.

They will also have the option to adjust the recording’s resolution and the frame rate, while also having the option to record at 24, 25, or 30 FPS, while more advanced functions will allow them to set a 3-2-1 countdown before starting to record, or even enable 5MP enhanced screenshots.

Logitech Capture is a great application for all users that use Logitech webcams, for it will bring them many options to customize their recordings.

One of the best collaboration platform for all types of businesses.
11 / 1,165

Useful app for using the smartphone as a webcam or microphone.
45 / 602 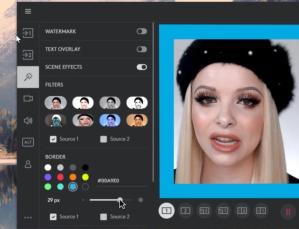