MSI Kombustor is a powerful, yet intuitive benchmark tool for testing the performance of graphics cards. It has a plain, functional UI that shows the primary graphics card, device ID, driver and OpenGL of your computer, as they’re automatically detected as soon as you open it.

Also, the application displays other information for your graphics cards, such as power, load level and temperature. Users can choose from three 3D tests - Wavy Plane (GL2), Fractal Frame (GL3) and Triangle of Death (GL2) that let you find out the average frames per second of your graphics card.

Users also have the option to run a preset in 1080p or 720p, a test that is especially useful to find out how your graphics card performs in high-end video games. You can view more information and test scores on a webpage.

Advanced features of MSI Kombustor enable you to perform a GPU burn-in test on the 3D API - OpenGL 2, OpenGL 3, Direct 3D 9, Direct 3D 10, Direct 3D 11 -, but also to choose a 3D object between MSI, Torus and Sphere of Box. Also, you can turn on Post FX and run OpenGL 4 and PhysX benchmark tests with music.
In the Settings, you can change the default resolution, switch to full screen more, enable anti-aliasing and select a fur color map and a background image.

A free hardware monitor for Windows capable of displaying resource usage on an in-game overlay
8 / 2,263 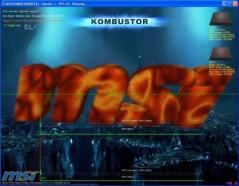