No Video
The easiest way to unlock, root, relock or unroot your Nexus device

Nexus Root Toolkit is a free utility that offers you a simple way to get the files you need for unlocking, rooting, relocking or unrooting your Nexus device.

On top of that, you can use this application for data backup and restore, to define file permissions, app installs, flash zips – with just a few clicks and the list goes on!

The program’s UI can fully automate tasks in TWRO and includes powerful restore features, screenshot and screen recording tools, an auto-update and notifier and more.

Nexus Root Toolkit supports all Nexus devices and the various Android builds they come equipped with, including Nexus 5. It’s also incredibly easy to use since it can automatically detect your device and provide the exact files you need.

With this tool you can update your Nexus device as quickly as possible as it lets you flash any stock Android release but also configure your drivers automatically. 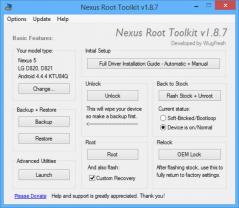 Mem Reduct 3.3.5 Keep track of your computer’s memory status in real time with this handy and convenient tool
Latest Articles
10 Best music player apps for Android
How to download images from Instagram
How to permanently delete text messages on your iPhone
6 Best Free Registry Cleaners for Windows
How to transfer your contacts from Android to iOS
Best torrent downloader software
5 Excellent iTunes Alternatives for Windows
4 Best Instagram Repost Apps for Android and iOS