There are numerous tools available which can record your gameplay sessions, but more often than not they take a toll on system resources which translates into reduced frame rate and game performance in general. PlayClaw is an intuitive piece of software that lets you capture screenshots as well as videos while you’re playing video games without impacting your gameplay.

The functional interface offers all included options in the same window. Users can set the output folders for captured screenshots and videos, set the app to run automatically at Windows startup, make it open minimized and show/hide the System Tray icon.

PlayClaw allows you to tweak some essential capture settings such as the hotkeys used to grab screenshots and for starting/stopping video recordings. You can also select the encoder from the dedicated menu and set the number of FPS.

You can show the program’s in-game settings as soon as you define a key shortcut for this action. This will allow you to display the Options menu while you’re playing a game without having to minimize or close it.

Videos can be saved as AVI files while captured images can be saved using the PNG format. For video captures you can change the audio source, plus there’s built-in support for chat apps such as Ventrilo and Teamspeak.

Helpful image captioning tool that brings plenty of new features to the table.
4 / 1,076

A small and easy to use tool for capturing area screenshots with editing, printing and sharing options
8 / 1,314

Record, play, pause, and watch all of your favourite HDTV television programs and movies with this handy utility
11 / 2,558

Considered to be the most ultimate screen capture utility for Windows computer users
27 / 2,415 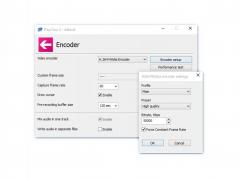 Screenpresso 2.0.0 Take the best screen captures in a few seconds.

SnapDraw Free 3.20 Create Annotated High-Fidelity Screen Shots in Minutes, not Hours !
Latest Articles
How to Save and Download Workouts on Apple Fitness+
3 Quick Ways to View and Edit Apple Notes on iPhone using Windows PC
How to Record a WhatsApp Call on Android and IOS
How to Blur Pictures Using PowerPoint
How to Send SMS Messages Using Windows 10
How to Use Google Lens for Solving Math Problems
How to Free Up RAM on your Windows PC
How to install and use the TikTok app in Windows 10 or Mac OS