If you’re looking for a robust and trustworthy file recovery tool for Linux and other Unix operating systems – R-Linux is the solution.

R-Linux can recover data from Ext2/Ext3/Ext4 file systems that are commonly used in Linux and many other Unixes. The application relies on the IntelligentScan technology and offers you customizable parameters so you can truly control the data recovery process.

Files can be recovered from logical disks even if the file records are lost. Nevertheless, R-Linux doesn’t support networks and cannot reconstruct damaged RAIDs or stripe sets. Recovered files can be saved on any disk that the host operating system can access.

- Supports Ext2, Ext3, and Ext4 file systems – limited to Linux and several other UNIX-based systems
- Support is enabled for recognition and parsing dynamic
- Support is enabled for bacis GPT and BSD (UNIX) partitions layout schema, Apple partitions, dynamic partitions over GPT and dynamic partitions over MBR
- Image files can be created for entire or parts of hard driver and logical disks
- Capable of recognizing localized names
- Lets you save the recovered files to any disk (network included) that the host OS can access

To use R-Linux you’ll need at least 32 MB or RAM, a mouse, plenty of free disk space for the recovered data, an Intel-compatible x86 or 64-bit processor and a network connection needed if you want to use the network data recovery features.

A robust tool that lets you recover data from iPhone, iPad, and iPod Touch devices
16 / 944

Scan and restore files of any Android device connected to your computer
19 / 1,127

Provides simple means of backing up your data on demand, as well as based on a schedule.
25 / 1,828 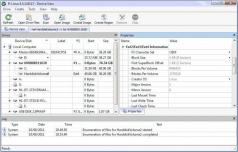