Play classical games and launch old applications on modern computers and consoles using this cross-platform, open-source emulator that has an online library, achievements, and more

RetroArch is an application designed as an interface for game engines, emulators, and media players, allowing you to run old apps and classic games on modern PCs and consoles.

You can easily download and install various classic games and emulated consoles from the constantly updated library available in RetroArch. What's more, the application can also load artwork, assets, shaders, and cheat codes.

Before running RetroArch, you need to download the ROM games you want to play. Then, you will need to select the console you want to emulate a game for, via the core updater and ask the program to scan the PC for games. To continue, select a game from the main menu and run it.

The application was designed to automatically detect your game collection and sort the titles. Users can manually select the drivers for the joypad, video, audio, camera, menu, location, recording, and audio resampler among others.

A great portable version of the well known Command Prompt which works with all Windows OS versions
34 / 1,764

Easily manage the programs that automatically run every time you turn on your computer
12 / 1,065

Useful program for casting the screen of an iOS or Android device to the PC or Windows Tablet.
45 / 245 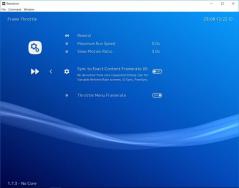