No Video
Skipper is an intuitive piece of software that lets you easily create and edit visual definitions in various ORM frameworks such as Cake PHP, Propel, Doctrine and Doctrine 2 in order to automate and speed up the importing process for project definitions.

The program can be used to create and edit definitions which include a large number of associations, entities and fields. There’s also the possibility to add and edit a wide array of plugins, modules and regions represented as graphical symbols in the app. The included editor lets you edit each of the offered properties, such as not-null, auto-increment and size.

Once you choose an ORM framework, you can also select the MVC framework you want to use for your project. Zend Framework and Symfony are among the possible choices, and the same collection of useful options is available for all of them.

Definitions can be imported and exported in a large number of file formats. For example, you can quickly export projects as image and PDF files, as well as import external models and ORM schema documents.

An efficient application designed to help you manage numerous types of databases
5 / 1,646

A handy and efficient modelling and code generation tool for Entity Framework
11 / 3,879

Manage and maintain your servers in an efficient manner
6 / 557 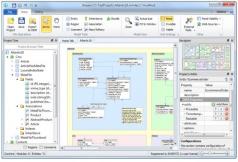 XAMPP 7.3.1 Easy to use Apache instalation for your PC
Latest Articles
How to Watch Netflix Videos Offline
How to Blur Pictures Using PowerPoint
How to Optimize Windows 10 For Gaming
5 Useful Search Engines for Social Networks
How to Get a Cheap (or Free) Windows 10 License
Top 5 Best DNS Servers for 2020
How to Improve Your Android Phone Security Using these 7 Built-in Features
How to Manage your Apple Watch Activation Lock