Handy application to record sounds that are being played from the computer.

SoundTap Streaming Audio Recorder is a relatively easy-to-use program that was developed in order to allow users to record the sound that is being played through their PC, be it a radio broadcast or a movie soundtrack.

The program comes with a user-friendly interface that lets them view when the program receives an audio stream, in order to start recording.

The program can also be used by users to record conferences or VoIP conversations, for it can record both output and input directly from the sound card.

It will allow users to save the output file to a user-defined location, while the encoder parameters can be defined according to the user's preferences, like adjusting the bitrate or the encoding mode, and it is mostly optimized for programs like BroadWave, Express Talk VoIP or Skype.

SoundTap Streaming Audio Recorder is a very handy application for all users that want the possibility of recording conferences, VoIP calls, and other sounds that are being played from their computer.

A fully-featured audio application you can use to create musical compositions as well as record and edit audio files
17 / 2,951

A powerful piece of software that can record all the sounds in a room when sound is detected or other custom triggers occur
6 / 1,172

An advanced application that helps musicians to create the final version of their mixes
37 / 5,343

An intuitive and lightweight application for recording audio streams from various sources with a built-in recording scheduler
10 / 3,629

A multitrack recording and mixing application equipped with wave and MIDI editing
6 / 1,247 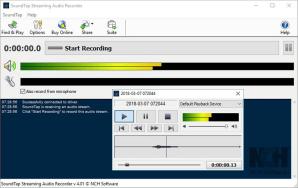