No Video
Working with a lot of files usually means that you have to constantly back up everything you do in case of file corruption or hardware failure. This isn't a simple task and more often than not, most of us forget that something can fail at any time and you can lose all your data in just a second.

SyncFolders is a small but powerful tool that allows you to sync two folders with ease, by creating a set of rules. The process is rather simple, the user is prompted to select the source and target folder and the operation you want to be executed between those folders, copying, backup or synchronization.

The application comes with a very simple interface, user can set-up everything with ease and with the help of the built-in filters you can customize various folders and file actions. The software also comes with a preview feature, allowing the user to see what will happen before the actual synchronization begins. SyncFolders can also detect file conflicts and logs every action in its database.

SyncFolders can be run from any storage device and even from a network drive. If you're looking for a backup tool or if you want to do more complex tasks using Task Scheduler, SyncFolders does the job with ease.

Find and delete unnecessary data on your computer
14 / 295

A functional file manager that works as a relational file system
24 / 1,853

A portable utility that can change file attributes with support for batch processing
7 / 1,106 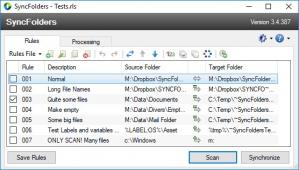 Latest Articles
What is the best file compression software for Windows?
The Best Apps for your iPhone (2020 Edition)
Copy and listen to music on your iPhone without using iTunes
4 Best anime apps for streaming on Android
Best Android Emulators for PC and Mac (2020 Edition)
How to block people from adding you to WhatsApp Groups on iPhone and Android