No Video
Software testing is essential for developers as it lets them gather information regarding the quality and performance of their products and services. Through automated testing, the software testing is carried out with little or no human interaction.

TestComplete is a powerful application that lets users test a variety of applications written in some of the most popular programming languages such as .NET, C# and Java. This automated testing tool allows you to create, maintain and perform scalability and stress tests for practically any client or desktop applications.

TestComplete comes with a functional and intuitive interface as its focused on both unit and functional testings, suitable for advanced and beginner users alike. The tool supports daily regression testings, but also other types like object-driven, data-driven, functional and GUI testings among others.

Users can name objects, then execute debugging and running tests as well as handle errors and other operations which are usually performed during tests. In TestComplete you can address processes, windows, and controls using two offered methods. The first one is to assign name to objects automatically, and the second method incolves mapping application objects which will allow you to customize their names.

Once you set the parameters, you can run complex tests on your applications and run them on both virtual and physical machines. Various types of tests can be created with TestComplete including keyword tests, unit tests and automated tests for HTML5 content.

Play your favorite NES games on your computer and organize your entire collection
6 / 1,009 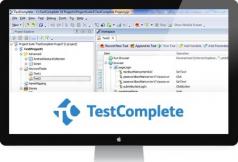 Komodo IDE 12.0.1.91869 A comprehensive IDE for editing and debugging code, with support for numerous programming languages, such as JavaScript, HTML, C / C++, XML, Perl, Python, and PHP
Latest Articles
How to Reduce Steam’s RAM Usage from 400 to 60 MB
How to Watch Netflix Videos Offline
How to Blur Pictures Using PowerPoint
How to Optimize Windows 10 For Gaming
5 Useful Search Engines for Social Networks
How to Get a Cheap (or Free) Windows 10 License
Top 5 Best DNS Servers for 2020
How to Improve Your Android Phone Security Using these 7 Built-in Features