TortoiseHg is a Windows shells extension that packs a series of programs for the Mercurial distributed revision control system and it also features Gnome and Nautilus extensions support as well as CLI wrapper application so its tools can be ported and used on other platforms different from Windows.

Gnome and Natuilus integration is supported as well. Supported platform are Microsoft Windows XP, Vista, Windows 7 and Windows 8. Command line support is featured via THG. Mac OS X port is available via souce installer. When using TortoiseHG it is recommended that indexing service on the working copies and repositories is turned off, and they should also be excluded from anti-virus scans.

A simple multi-function command line tool you can use to automate various computer tasks
25 / 2,629

A handy tool that quickly performs a SHA-1 and MD5 verification to determine whether you have genuine Microsoft Office and Windows ISO files
13 / 1,039

A simple utility that lets you quickly find files, folders and text
10 / 1,753

Preview the content of the printing directory and manage the file details that you want to print along with the data using this tool
102 / 3,535 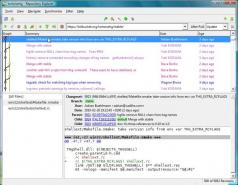