Tuniac is an intuitive media player designed in the style of itunes that lets you play various audio file formats, including popular ones such as MP3, MP4, FLAC, MIDI and OGG. While the iTunes-like UI is incredibly straightforward, it doesn’t compromise on the number of advanced functions the tool can carry out.

You can minimize Tuniac to the system tray during playback and while it’s maximize it can keep the computer from entering screensaver mode. Also you can set it to be always shown on top of other applications and open windows.

The application can be configured to show graphic visual effects in sync with the rhythm of the audio file currently playing. It can play a large number of audio formats, including MP3, MIDI, 3GP, MP4, FLAC, OGG, AC3, TTA, MPC and WV but also radio stream.

Users can import folders, files or streams into the app, as well as create playlists which can be saved or exported. While not all functions are directly visible in the UI or equipped with a shortcut button, the tool packs essential options like play, repeat, shuffle and play a random file.

The sound output can be customized by tweaking the equalizer’s values as you see fit and enable crossfading for audio tracks. Lastly, Tuniac has a built-in preview function for viewing album art of audio files and it capable of showing comprehensive information for each track such as file name, artist, album title, URL, size, track genre, bitrate, BPM and channels among others.

A powerful audio mixing application suitable for both professional and novice DJs
18 / 1,688

A client application for the Emby Server that lets you access music and videos in your library from any computer in the network
28 / 3,217 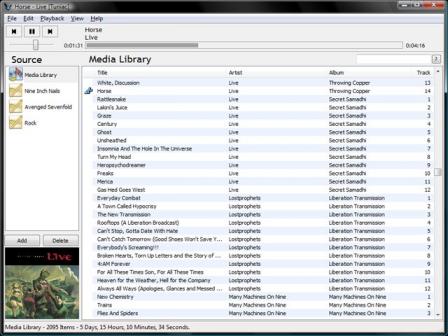 KMPlayer 4.2.2.37 Media player with full VCD/DVD playback
Latest Articles
How to Save and Download Workouts on Apple Fitness+
3 Quick Ways to View and Edit Apple Notes on iPhone using Windows PC
How to Record a WhatsApp Call on Android and IOS
How to Blur Pictures Using PowerPoint
How to Send SMS Messages Using Windows 10
How to Use Google Lens for Solving Math Problems
How to Free Up RAM on your Windows PC
How to install and use the TikTok app in Windows 10 or Mac OS