Customize, clean and optimize your Windows 10 system in no time, with the help of this comprehensive and efficient piece of software

Windows 10 is one of the best operating systems that Microsoft created and while the system itself is very customizable, there are several options and settings that can be tweaked directly from Windows itself.

Tweak-10 is a Windows 10 tweak application created by the developers of the popular Tweak XP Pro, Tweak-7 and Tweak-8. Needless to say, these are arguably the best Windows tweakers on the market.

The interface is familiar and intuitive, allowing the user to tweak various functions and features. While the tweaking itself seems like a job for advanced users, Tweak-10, due to its simplicity, can be used by all users, from beginner to advanced.

There are various functions and features that can be altered to suit your needs, from Network and Internet tweaks and system tweaks to visual alterations such as taskbar, menus and other OS elements.

Tweak-10 is a powerful tool to further tweak your Windows 10 installation without the need to edit your registries or do other complicated settings.

Gret program for managing Lenovo computers and customizing them to the users liking.
2 / 551 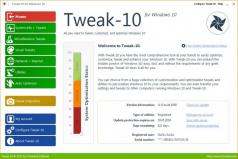 Mem Reduct 3.4 Keep track of your computer’s memory status in real time with this handy and convenient tool
Latest Articles
How to Set an Alarm on Your iPhone when Your Battery is Fully Charged
How to connect a console game controller to a PC (Windows and Mac)
How to Effectively Free Up Storage Space for Android Phones
How to block people from adding you to WhatsApp Groups on iPhone and Android
What is the best archiver for Windows?
How can you change your Twitch username
How to use Google translate offline on PC
The Best Computer Temperature Monitor Apps