No Video
UserBenchmark - There are many benchmarking utilities on the internet that can test various PC configurations and hardware pretty efficiently. UserBenchmark is one of those apps that gained a lot of popularity within the gaming communities and became a go-to benchmarking solution for many.

UserBenchmark lets you test your CPU, video card, memory and drives (HDDs and SSDs). The application comes with a large array of tests for a more accurate assessment of hardware configurations and problems.

The processor tests will include integer, floating and string, the GPU will be tested using 6 3D games simulations, drives will have different read and write tests with some combined IO and lastly, the memory will be tested in both single/multi-core modes. Another nice feature is the ability to test flash drive speeds and compare their speed with other users.

UserBenchmark also lets you compare your benchmark scores with other users on the internet and displays the health of each individual hardware component and advises you on upgrades if that's the case, which is an excellent feature to have, especially if you're a beginner.

In conclusion, UserBenchmark is one of the best benchmarking applications on the market, it lets you test your system thoroughly in case of overclocks or just if you bought new hardware and you need to test it out. Any errors will be reported and as mentioned earlier, it will provide upgrade advice when needed.

Observe the current GPU stats and get useful info if you want to OC your GPU
1 / 2,150

Get comprehensive information about your computer’s hardware and software and generate reports
1 / 1,376

An incredibly reliable benchmark tool, equipped with tests for all types of devices
3 / 11,258

A friendly and functional application that can run benchmarking tests on HDD, SSD, USB sticks and SD cards
0 / 711 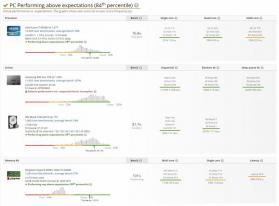